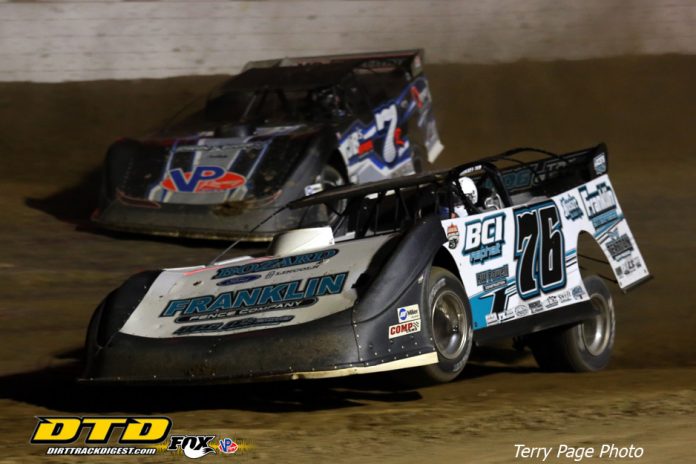 MIDDLEBOURNE, WV – Brandon Overton won the richest one-day prize in dirt late model racing history, capturing the 50th Annual General Tire Hillbilly Hundred at Tyler County Speedway on Sunday night.
The 27-year-old took the lead from home-state favorite, Jared Hawkins on lap 70 and led the rest of the way to the $50,000 payday. Hawkins managed to hold off Mason Zeigler for second. Zeigler came home in third with Jimmy Owens and Gregg Satterlee completing the top five drivers.
Overton received congratulations from his crew after a hard-earned victory as he entered Lucas Oil Victory Lane. “I can’t quite shaking. We just had the worst two nights of racing I think I have ever had. Last week at Mansfield we didn’t even make the race. It’s just a miserable feeling. We ran some regional races and did pretty good and we thought we were going to come up here and show everybody what we are made of. We got beat down pretty quick. There are just different parts of the country where you need to race different. Last night we were about to get lapped and to come back tonight and win, this is great.”
“I am glad to have the support of everybody behind me. I am thankful for Billy Franklin for giving me this opportunity. Billy hasn’t said one thing. We have run terrible the last two nights and hasn’t said nothing. That’s why I love to drive for him. I would rather be on the upside than the downside with this deal. I didn’t know what was going to happen after the Dream, but it couldn’t have ended up any better than it has,” Overton added.
Hawkins, who had the capacity crowd rooting for him, nearly pulled off the win. “Early on in the race I was just feeling out the car and where I could run it best. I just tried to maintain a good pace and take care of my stuff. I was just trying to be there at the end. I guess I needed to move up on him [Overton]. He just got up on the wheel and got it done. I love racing with these Lucas Oil guys. It’s a lot of fun to do that. Thanks to all of the fans for coming out and thanks to Tim Logan for giving me a shot at driving his car.”
Zeigler, who currently leads the Rookie of the Year chase, came home in third. “I didn’t do well in qualifying and it put us behind. I think if we would have started up front we would have been even better. It is what it is. I am happy for those two guys who ran up front. Congratulations to Brandon on the win. It was good to see the top three being Rocket Chassis. Brandon was really good. I think we could have run second. I got up on Jared [Hawkins], but that was about it.”