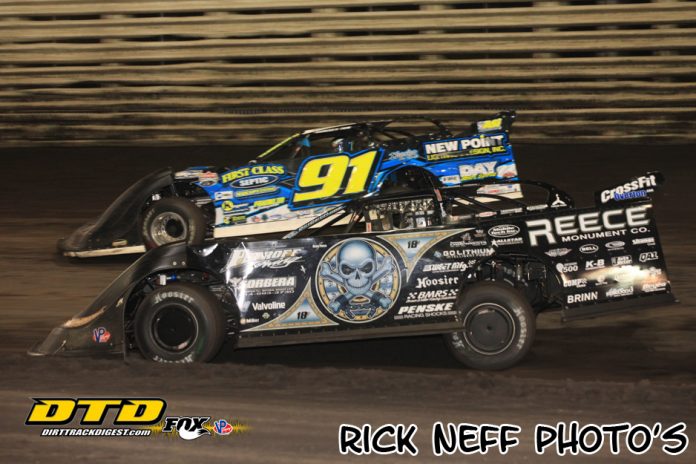 KNOXVILLE, IA – Tyler Erb scored his first career Lucas Oil Late Model Dirt Series win on Thursday night at Knoxville Raceway.
The 21-year-old Texan took the lead from Mason Zeigler with eight laps to go to become the eighteenth different winner on the series tour in 2018. Earl Pearson Jr. passed Chad Simpson on the final lap to finish in second. Jimmy Owens finished in fourth followed by Frank Heckenast Jr.
Zeigler, who leads the Lucas Oil Rookie of the Year chase, led the first sixteen laps of the race until he jumped the cushion in turn four, leaving the door open for Erb to take the top spot. Erb then pulled away to take the victory in night number one of the 15th Annual Lucas Oil Late Model Knoxville Nationals presented by Casey’s General Store.
An emotional Erb in Lucas Oil Victory Lane thanked a multitude of people for sticking with him this year. “Thanks to everyone who helps me. It’s been a long year and a lot of stuff has happened. Thanks to Wayne Childress and Steven Roberts. It feels like I have been racing forever and it has not been that long. This is the sweetest feeling I have ever had in my life.”
“I was pretty good there. I had a good run going on him [Zeigler] and I hit that burm in two. Once he [Zeigler] jumped the cushion I figured I had better go, it might have been my only shot. Words cannot even describe how I feel right now.”
Pearson slid in front of Chad Simpson off the final turn to finish runner-up to Erb. “That’s all my fault, Chad and I are real good friends. I miscalculated there on the slide job. I hit the black and just slid up in front of him. My apologizes to him and I am just glad it didn’t take out both of us. I don’t drive that way and like I said it was just a miscalculation on my part. I was riding around the top. We were not very good on the bottom. That last caution definitely helped us starting on the outside.”
Simpson, the current Lucas Oil MLRA points leader finished third. “We had a really good race car. I think early in the race when I was trying to take the lead I used up my right rear tire too much. There late in the race I was just kind of wheel spinning with it. I am sure it is all shredded up really good. It was a good night for us and a good finish. It should be a good point night for us.”
Erb’s Rocket Chassis is powered by a Clements Racing Engine and sponsored by: First Class Septic Systems, New Point Lighting and Design, Day Motorsports, KBC Graphics.com, Franklin Enterprises, Keyser Manufacturing, Toste Construction and Roberts Bee Company.
Completing the top ten were Scott Bloomquist, Brandon Sheppard, Chase Junghans, Chris Simpson and Mason Zeigler.
Lucas Oil Late Model Dirt Series
Race Summary
Thursday, September 13, 2018
15th Annual Lucas Oil Late Model Knoxville Nationals – presented by Casey’s General Stores
Knoxville Raceway – Knoxville, IA