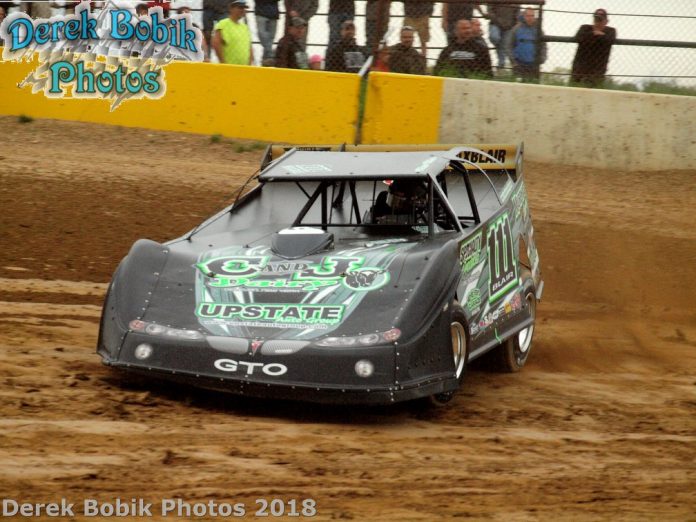 EAST SMETHPORT, PA – The Sweeney Chevrolet Buick GMC RUSH Racing Series presented by Pace Performance participated in the Fall Invitational wrapping up the 2018 season at McKean County Family Raceway- the first ever the promotional efforts by the Bigley Family. After a rainout in August, the Sweeney Late Model Tour made their first visit of the season with a strong 38-car field for race #15 of the season as Max Blair picked up the win; meanwhile the new RUSH Sprint Cars were a late addition to the show in their 22nd Bonnell’s Rod Shop Weekly Series event of 2018 with Chad Ruhlman winning.

“It’s been an awesome weekend,” expressed the 27-year-old Centerville, Pa. winner, who also earned the $5,000 Sweeney Weekly Series Championship for the fourth time in six years. “We’ve been up here for years for this event and it’s literally my favorite weekend of the entire year. I love this whole Fall Classic deal. I have to thank these guys for putting it on and all the fans for sticking it out- it’s cold! You always look at the (score) board and I was wondering where Mike (Pegher) was. I seen he got into second there at the end and was just hoping for no more cautions because he’s good at hitting those starts. I have to thank my dad- I couldn’t do this without him, all my sponsors, along with Mike (Leone) and Vicki (Emig) for everything they do for crate racing around here. It sure is a lot of fun.”

Blair quickly jumped out to the early lead over Jason Genco, Sam Pennacchio, Mike Pegher, Jr., and Jeremy Wonderling. By lap four, Blair stretched out his lead, while Genco was trying to fend off Pennacchio and Pegher for runner-up. Blair increased his lead to a straightaway on lap seven when he caught lapped traffic, but would get a clear track when the provisional starters of Adam Ferri and Scott Dellahoy tangled.

When racing resumed on lap eight, Pegher passed Pennacchio for third, while Waters moved into the top five. Jeremy Wonderling would slow to bring out the caution with nine laps completed as his brother Brady had advanced from 16th to eighth. He would later get as high up as sixth before exiting the event. A big melee took place in turn three on the ensuing restart that collected 11 cars including Damian Bidwell, Darrell Bossard, and Scott Gurdak; most just received minor damage and would restart at the tail.

Back under green, Blair resumed his lead, while the big battle was taking place for fourth between Pennacchio and Waters. Waters found a nice line around the middle of the track and after a side-by-side battle for two laps, made the pass of Pennacchio stick coming off turn four on the 15th circuit. The event’s final caution took place with 15 laps scored when it was three-wide at the end of the frontstretch as Andy Proper was the meat in the sandwich and got squeezed as he slammed the wall hard. He was shaken, but okay.

When racing resumed on lap 16, Pegher disposed of Genco for second, while Eric Wilson moved into the top five from 12th. Waters then went to work on Genco and drove around him on the outside on lap 20 for third. As the final 10 laps went caution-free, Pegher was unable to get a chance alongside Blair as Blair went on to win his 21st career Sweeney Tour victory by a commanding 3.019 seconds in his Murphy’s Logging/C&J Dairy/Upstate Auto Group/Moody & Son Welding/Previty’s Auto Wrecking/Specialty Products/Niemeyer Garage-sponsored #111.

Pegher would back up his first Sweeney Tour win at the last event on August 19 at Tri-City Raceway Park with a fine runner-up. Waters had a strong run in third for the 2016 champion’s fifth top five of the season. Genco held on to fourth, but was able to extend his points lead with just two events remaining. Wilson, a former Tour regular, made just his third start of the season and recorded his third top seven finish in fifth.

Canadian Sam Pennacchio was sixth in his first Tour start since May 22, 2017 at Merrittville Speedway when he finished ninth. After pitting on lap nine, Jeremy Wonderling was able to come all the way back to finish seventh to salvage his night. After qualifying only 32nd fastest out of 38, Andy Michael worked his way into the feature then went 22nd to eighth to earn the $100 Precise Racing Products “Pedal Down” Hard Charger gift card. Paul Grigsby also was able to move forward going 20th to ninth in his first Tour start since last year’s event. Jimmy Johnson, Jr. rounded out the top 10.

Despite going out 36th out of the 38 qualifiers on a daytime surface, Blair was still able to set fast time by just 0.037 of a second over Pegher- his third $100 FK Rod Ends “Shock the Clock” honor of the year. In addition to Blair, also winning $25 FK Rod Ends heat races were Pegher, Bidwell, and Genco. Kyle Murray and Michael copped the last chance B mains. The 38-car field was the highest for the event since the 2014 “Fall Classic” that drew 45 cars.

In his first Tour start in more than two years, Zach Wiech held off a hard by Wendell Pinckney to claim the final feature transfer spot in the second last chance B main, and was named the Dirt Defender “Defensive Drive of the Night” recipient. Canadian Michael Goudie was selected as the TBM Brakes “Tough Brake of the Night”. The Brighton Speedway racer made the five-hour tow for his first ever RUSH race, but his night ended early in the opening heat race.

2014 RUSH Late Model Weekly Series Champion, Chad Ruhlman, will go down in the history books as the very first winner of the RUSH Sprint Cars at McKean. The 41-year-old Bemus Point, NY driver’s 20-lap feature victory was worth $600 as he currently leads the $5,000 to-win Bonnell’s Rod Shop Weekly Series Championship. Ruhlman’s mandated sealed, spec $135 Bilstein Shocks were confiscated in post-race tech for further testing. The event was timed non-stop in 5:44.732

Ruhlman started second, but fell back to third on the start as Arnie Kent led the opening lap over Brian Woodhall. It was three-wide in turn four on lap two with Woodhall moving to the lead. Lap three saw Ruhlman get under Kent for second. Ruhlman made the winning pass on lap four when he drove around Woodhall on the top of turn four.

The top three of Ruhlman, Woodhall, and Kent pulled away from the field on lap six and by lap eight Ruhlman stretched out his advantage as Woodhall and Kent battled for second. Woodhall slowed and exited the event on lap nine moving Kent back to second and Brad Blackshear up to third.

Kent, who was fresh off a runner-up finish on September 19 at Lernerville Speedway to earn the $1,000 “Wednesday Night Lightning” Series title, was no match for Ruhlman, who took the checkered flag first for his season’s 14th win by 5.580 seconds in his North Star Unlimited/Rand Machining/Premier Communications/Ruhlman Race Cars/Close Racing Supply-sponsored #87R.

Heat winner, Dave Hawkins, and his son Scott both used the outside to pass Blackshear for third and four on laps 14 and 15 respectively. For Dave Hawkins, his third was his best finish of the season eclipsing a pair of fourth place efforts back in May and June. Scott Hawkins recorded his sixth top five of the season in fourth. Blackshear dropped to fifth.

The Sweeney Late Model Tour resumes action in a big way this weekend (October 5-6) part of the 30th annual “Pittsburgher” as the “Bill Hendren Memorial” presented by FK Rods Ends will take place. On Friday, FK Rods Ends “Shock the Clock” Qualifying and heat races will kick-off the weekend in addition to the $500 to-win “One to Remember” non-winners event presented by Pace Performance. Saturday will get started with the last chance B mains and dash to set the line-up for the 40-lap, $4,000 to-win, $300 to-start feature. A $250 to-win non-qualifier will also be held.

The RUSH Sprints will be off until the “Steel City Stampede” on October 12-13, which will feature an $800 to-win Bonnell’s Rod Shop Weekly Series special event.