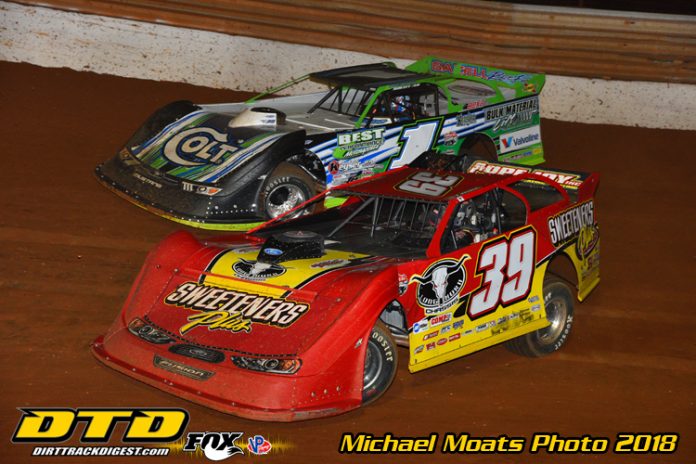 Following the on-track action on Friday night, Re Issue will provide entertainment with a wide array of music from Classic Rock to Americana to Roots – sometimes mild, sometimes with an edge. The hit band is comprised of three very experienced musicians and supported by a formally trained sound engineer. Several local breweries will offer beverages in addition to food and a bonfire. All Pittsburgher 100 ticket holders will be admitted free, with all others being only $5.00.

Saturday’s activities will include a Dirt Racing Outreach Service from 3:30 – 4:15 pm, followed by a Driver Autograph Session from 4:30 – 5:15 pm. The on-track action on Saturday night will include B-Mains and the 100-lap, $20,000-to-win main event for the Lucas Oil Late Model Dirt Series, along with feature events for the RUSH Late Models and Penn-Ohio Pro Stocks.

The Pittsburgher 100 is accustomed to some of the most high-speed, door-to-door, edge of your seat racing action of the season. In 2017, Don O’Neal led from start to finish to claim his first-career Pittsburgher 100. O’Neal had to fight off charges from his Clint Bowyer Racing teammate, Darrell Lanigan, who ultimately finished second. Josh Richards, Earl Pearson Jr., and Jimmy Owens rounded out the top five.

Jonathan Davenport enters the Pittsburgher 100 with a commanding lead over Josh Richards in the Lucas Oil Championship Standings. With his 300-point advantage, Davenport will earn his second national championship simply by entering the final two events of the season. Scott Bloomquist remains third, while Earl Pearson Jr. and Tim McCreadie round out the top five in current championship standings.