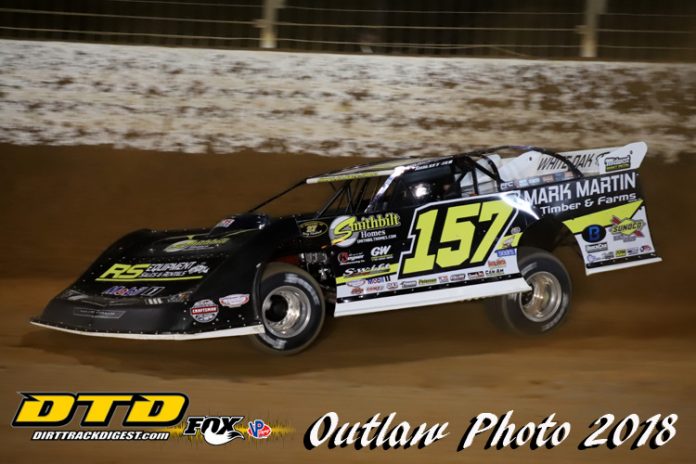 CONCORD, NC – Night one of the World of Outlaws World Finals presented by Can-Am Off Road from The Dirt Track at Charlotte got off to a great start on Thursday afternoon, with Super DIRTcar Series qualifying sessions rolling onto the track promptly at 3:45. Things didn’t end very well for the World of Outlaws Craftsman Late Models, though, as their final qualifying session of the evening was halted by Mother Nature.

Everything else in the Thursday portion of the program went well, however, as all other Super DIRTcar Series and World of Outlaws Craftsman Sprint Car/Late Model Series events were completed.

This puts McDowell and Madden on the front row of Friday heat one, Bloomquist and Pearson Jr. out front of heat two, Donny Schatz and sixth-fast Group A time trailer Dakotah Knuckles in row one for heat three.

Drawing from these times, Clanton will sit on the pole of heat four with Marlar alongside him. Heat five will feature Ferguson and Eckert on the front row, while Sheppard and sixth-fast Group B time trailer Benji Hicks will lead the field to the green in heat six.

Unfortunately, Saturday’s portion of qualifying was cut short from a late rain shower that began around 8:45 p.m. Mike Marlar set fast overall time in Group A with a 14.536, while Group B was rained out. This session will resume action after the Super DIRTcar Series Last Chance Showdown on Saturday evening; line-ups will be posted on our Twitter page.

Friday’s World Finals presented by Can-Am is still on as scheduled; stay tuned to both World of Outlaws and The Dirt Track at Charlotte Motor Speedway’s social media channels for the most up-to-date news regarding schedule changes.

As always, if you can’t make it to the track, watch every lap LIVE on DIRTVision!