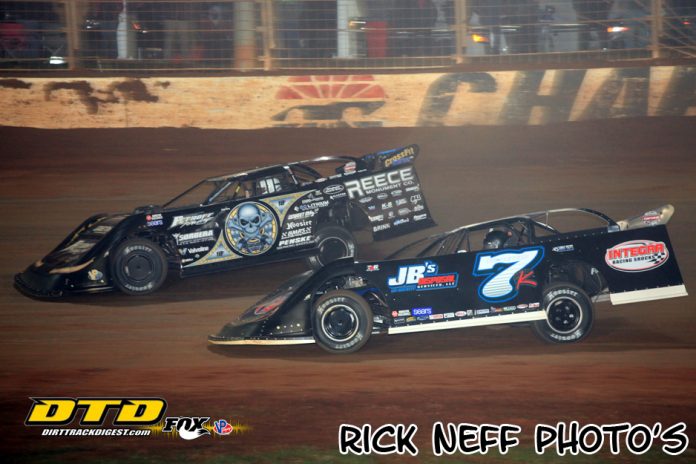 CONCORD, NC – What once started earlier this year, all the way back in February at the Volusia Speedway Park for the DIRTcar Nationals is now complete. The World of Outlaws Craftsman Late Model Series wrapped up its 30th Anniversary tour on Saturday night at the Dirt Track at Charlotte in the World of Outlaws World Finals presented by Can-Am, where Scott Bloomquist won his first since Florida in February and fellow-Tennessee native Mike Marlar officially clinched his very first World of Outlaws championship points title.

The Race: Up front, there really was never much of one, as Bloomquist went virtually unchallenged through 50 laps, which he led every one of. Scooping his second win of the season and 32nd all-time, Bloomquist re-drew the fourth wrench from the Craftsman box and took off like a rocket at the drop of the green. He grabbed the lead before the first lap was completed and would not relinquish it, going flag-to-flag for a $12k check.

But it wasn’t just Bloomquist on the track all by his lonesome for 50 laps, as multiple waves of lapped traffic appeared in his path, in addition to the multiple restarts. Try as the rest of the field may, though, nobody was catching the Reece Monument Co. No. 0 that night.

2018 Lucas Oil Late Model Dirt Series Champion Jonathan Davenport (ironically parked right next to 2018 World of Outlaws Craftsman Late Models Champion Mike Marlar) crossed the line in second after a very hard-fought effort to get there. Starting from inside row seven, Davenport made a very urgent charge to the front and broke the top five by lap 10. “Superman” battled with Chase Junghans lap-after-lap until he escaped the ShopQuik No. 18’s grasp just before the halfway mark.

From that point onward, Davenport was forced to fend off a hard-charging Brandon Sheppard to protect his runner-up spot in the closing circuits. Sheppard was strong on the topside, but ultimately unable to stay with the Nutrien No. 49. Davenport’s gap to Bloomquist in the final lap was over seven seconds, in case it wasn’t clear how far ahead the 0 was…

The Championship: Scott Bloomquist has won a World of Outlaws Late Model championship before in 2004 and racked up 32 feature wins since then, so nobody expects him to be doing donuts on the frontstretch after winning a race. Mike Marlar, on the other hand, had never previously attempted to follow the Outlaw tour before this year, and won the championship on his first try. So everyone understood why his Hoosiers were spinning after the checkered fell on Saturday night’s racing activities.

Officially, Marlar beat Sheppard in the Series points chase by 28 markers to claim his first World of Outlaws Craftsman Late Model Series title. With his sixth-place finish on Saturday night and Sheppard in his sights, Marlar knew the deal was sealed when the final flag dropped.

But “The Winfield Warrior” had a race to survive before any confetti rained on him, to which he drove perfectly. Marlar re-drew sixth, and from the drop of the green, sat comfortably inside the top three, staying out of trouble until just under ten laps to go when he noticeably backed down his driving’s aggressiveness. Slipping back to 6th by lap 44, Marlar would set the Delk Equipment No. 157 on cruise control for the rest of the distance.

“I got up to second there, and actually got up beside Scott, and I thought ‘Man, I’m having a little too much fun,’” Marlar said. “{With these tires,] the worry is if you wear them down thin, you might get a puncture in them. So I just wanted to be cautious and easy and not spend my tires and make sure they were thick enough that it wouldn’t puncture with a rock or something. I had to get into conservation mode there, and it all worked out”

Some may claim this is sandbagging, others might say it’s playing things smart. Whatever the case, Marlar drove the race he needed to secure the title. And the rest just all worked out.

“First off, running with the World of Outlaws has just been a pleasure,” Marlar said. “Win, lose or draw, it’s been great all year. We went to some awesome racetracks… and it was humbling to me to see how nice the officials were to us.”

Marlar continued on to give his upmost appreciation for all of the World of Outlaws officials and other competitors, even reminiscing on a time earlier this season where the World of Outlaws command center hauler had blown a tire on the highway in South Dakota and Marlar and his team stopped to help fix it. The comradery bits they all shared will be what Marlar remembers the most.

2018 Rookie of the Year, David Breazeale, also paid Marlar a visit earlier in the day to tell him “how much fun” it had been racing together. Just more sportsmanship at its finest, and another helping of what Marlar had hoped his season would be from the beginning.

And now that the race celebrations are over, it’s time for a few post-race activities, a deep breath, and a look into the future plans for the Delk Racing team. Their 2018 campaign was only supposed to be a “bucket list” item, according to Marlar. But he may be having second thoughts about leaving the tour for the next item on his racing bucket list.

“Right now, we’re just working out some details,” Marlar said. “We’ve got a lot to think about on an approach. There may be some partners that may come along and get involved, or there may not. So right now, I don’t want to talk too much about it; I just want to take the time and this moment to give Ronnie [Delk, car owner] all the glory he deserves. He does so much for us and I’m so glad he gets to go out as a champion.”

On behalf of all of the World of Outlaws Craftsman Late Model Series officials and crew, a big ‘thank you’ goes out to all of our great fans, sponsors and other supporters from all over the country who came out to the track each and every night on the tour’s 30th Anniversary schedule. Cheers to an even better racing season in 2019!