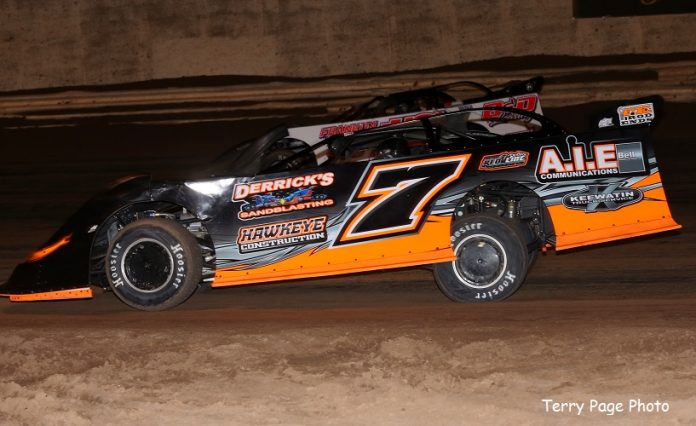 CONCORD, NC – Two World of Outlaws Late Model Series Rookies of the Year have eventually gone on to win the season-long championship. In 2019, six drivers will be taking their first steps toward adding their names to that exclusive list.

Ricky Weiss, G.R. Smith, Blake Spencer, Kyle Hardy, Cade Dillard and Chuck Hummer all have their sights set on the rookie title in 2019. All have unique talents and believe they can survive a season against the toughest competition they will have ever faced night in and night out.

Weiss, the newly-crowned five-time WISSOTA Late Models Champion from Headingly, Manitoba, has 28 starts with the Outlaws dating back to 2007. Even though he hails from north of the border, his best finish came in Tennessee on June 2, 2007, at Tazewell Speedway — a third-place run for the black-and-orange No. 7.

At some point in every good driver’s career is a “breakout race,” one that really defines their character and puts them on the map as a racer with potential. Weiss is certainly no Late Model amateur, but August 10, 2018 will forever live on his mantle as the biggest win of his career to date, as he took the 37th annual North-South 100 at Florence Speedway in convincing fashion over Tim McCreadie and Hudson O’Neal. With 24 other wins in his ride this past season, he’s the most decorated Rookie of the Year contender.

Weiss will sport a Sweet-Bloomquist chassis again in 2019 with Derrick’s Sandblasting, G-Style Transport, JC Properties and Turk Enterprises on the side of the car. Weiss plans to bounce around between Bloomquist’s shop in Mooresburg, TN and his own back in Manitoba, depending on time between races and their location. He said the help Bloomquist and his associates provide the team with the car is invaluable and will be a big factor to his own success on his first attempt at a national tour.

“We’re going to try and stick here as much as we can,” Weiss said. “The knowledge and the help that they give us, the amount that we learn from Scott and Cody [Mallory]… just being here is kind of surreal for us. Anytime we can get a bit of knowledge from those guys, we’re going to take advantage of it.”

Smith, a driver/owner from Statesville, NC, has been around the World of Outlaws tour before, but is finally taking his shot at the full season behind the wheel. Smith will be the sole driver of his bright red No. 22 after going to the DIRTcar Nationals in 2018 with Brian Shirley as his wheelman. While plans to run full-time in 2018 with Shirley didn’t come to fruition, Smith is set to go all out in his Victory Circle Auto Sales machine — something he has been anticipating for a while.

“I’m very excited to get back behind the wheel and have the opportunity to follow the Outlaws again,” Smith said. “So long as every piece of the operation stays together throughout the season, we’re prepared to go the distance.”

After his parting with Shirley, Smith picked up a bit of regional racing with the USLMS and also tapped Gastonia, NC-native Ross Bailes to drive the car in a handful of races later in the year. Next year, Smith will be back and full of ambition, starting at Screven.

Spencer and the Revolution Racing/Bozard Ford team will move to full-time status for the first time in 2018. The St. Augustine, FL-based team competed in 16 events throughout 2018, placing them 16th in Series points. Arguably the most determined driver on the list with the most to prove, Spencer says it’s full speed ahead on the team’s operation to get more experience out on tour.

“Everybody’s kind of taking the underdog approach,” Spencer said. “The experience level of me as a driver probably isn’t as qualified as most, but that’s part of the journey. I think everybody that’s in our program is on that same page, from Bozard Ford all the way down to a tire changer. We’re all on board with getting that experience and growing into something new.”

A brand-new face, never before seen with the World of Outlaws – Sylvania, Ohio’s Chuck Hummer will be joining the tour in 2019 with what could be one of the most interesting and unique operations the Late Model world has ever seen.

Hummer appeared in 25 of the DIRTcar Summer Nationals tour races in 2018, earning him a 10th-place Series points finish. He accomplished this all by himself, zero outside help from any additional crew members of any type, and a CT525 Chevrolet Crate engine – two of which he plans to use full-time next year. Very unusual for a such a high level of competition, but Hummer said it was something that worked in his favor, keeping costs down by also using an open trailer and dually truck.

“The Summer Nationals crowd is very tough, very competitive,” Hummer said. “I ran the whole deal and lost just one motor — that was just because the track was super rough. I finished the year with the same body on the racecar, all the same parts. All I lost was two radiators and an engine.”

He’ll have his own business, Service Drive Solutions, on the car, as well as an organization that will headline his entire operation. Little Blessings Veteran and Community Outreach, a nonprofit organization that helps veterans get back into their communities through activity-based programs, will be on the side of Hummer’s car in 2019, as well as on his pit crew. In fact, that’s all his pit crew will be, each night. A different group of veterans in each city the Series stops at will come out to the track and make up Hummer’s pit crew.

“I’m hoping to prove, just like I did on the Summer Nationals tour, that you can go out there with a $15,000 racecar and a $12,000 motor and be competitive against the team that has an unlimited budget and a $90,000 racecar,” Hummer said.

Making his debut with the Series this year and back again for a full-time run in 2019 is Cade Dillard, of Robeline, LA. Dillard raced just twice with the Outlaws in 2018, a 13th and an 11th in back-to-back nights at the Whynot Motorsports Park. Beginning his career in 2005, Dillard raced several years on the USMTS tour, a veteran behind the wheel of his Modified. However, his ventures in the Late Model didn’t begin until this past season, starting the year out in Arizona at the Wild West Shootout.

Dillard will sport Razor Edge Graphics, Hypercoil Springs, S&S Fishing & Rentals, Joel’s Auto Sales, Bryan Cook Trucks, Nichols Stores and Awolt Hot Oil Service on the side of the car next season, with an MB Custom chassis, built by close friends Jimmy and Chris Mars. Mars and his associates have been instrumental in the No. 97’s success, Dillard said.

“Jimmy Mars has been a huge factor in my program, he’s helped me a ton over the years since we’ve been running this Modified,” Dillard said. “He’s been a real big help in my transition to a Late Model. I lean on him and ask his opinion a lot, he said [a national tour] would suit us a lot better. He thinks we’d have a real good shot at it.”

Throughout 2018, Dillard also made appearances on both the MLRA and Louisiana Late Model Racing Series, with wins at the Sammy Nolen, Chatham and Thunder Valley Speedways, and a win with the Comp Cams Super Dirt Series the Timberline Speedway in Texas. This year, Dillard’s ready to venture out a bit more, saying the attractive tour schedule is part of the reason why he decided to tackle the World of Outlaws tour.

“I ran with [the World of Outlaws] a few times and I’ve always liked how they ran things,” Dillard said. “When I did come in there and race with them, they were always real nice and treated me good. To me, that means a lot. I don’t know many people and not many people know me, so coming in there where you feel welcome, it makes you feel good about your choice.”

Virginian Kyle Hardy and the Viper Motorsports team recently announced their plans to join the 2019 Outlaw roster and run for Rookie of the Year, following a runner-up finish in Ultimate Super Late Model Series points this past season for the Pennsylvania-based team.

Hardy, along with car owners Shawn and Lisa Martin, will pair with Barry Wright Race Cars in 2019 as a support system for their operation, just months after Chris Madden vacated his house car spot with the South Carolina-based race shop.

“We just thought a change would be good,” Hardy said. “We’ll be able to get more help, feedback and more hands-on help from those guys. I’ll be able to call them whenever I can; it should be a good deal working with those guys.”

Since his Outlaws debut in 2013, Hardy has appeared on 16 different occasions with his best finish coming in 2015 at the Potomac Speedway in August; a 3rd-place showing for the No. 99 team. LB Express, Pancho’s Race Products, Chiarelli Paving and Sable Construction will again back the No. 99 in 2019, and the team is looking forward to accomplishing their goals from Volusia to Charlotte.

“We’d like to run in the top-five in points,” Hardy said. “At least, win a race or get close to one.”

Any other roster news and updates will be made public as soon as they are confirmed. Stay in touch with the Outlaws on Twitter @WoOLateModels and on Facebook @worldofoutlawslatemodelseries.