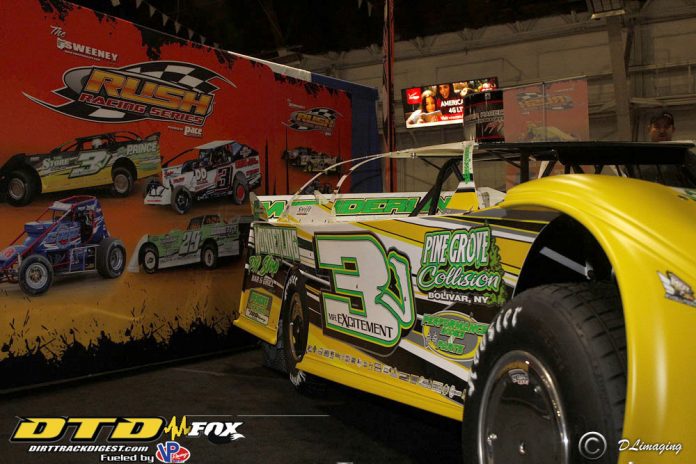 PULASKI, PA – The Sweeney Chevrolet Buick GMC RUSH Racing Series powered by Pace Performance will be going to an uncharted territory in 2019. The Sweeney RUSH Late Model Touring Series will not only cross the border into Canada, but move into the French speaking province of Quebec for the first time in Series history! On Friday and Saturday, July 12-13, Autodrome Granby and Le RPM Speedway will host back-to-back Platinum Touring Series events paying $4,000 to-win, $400 to-start in US currency! The two tracks are located only 40 miles apart. In addition, a minimum of 20 $100 Sunoco gift cards will be distributed to participating competitors to assist with travel expenses!

“We cannot express how excited we are about this weekend,” expressed RUSH Director Vicki Emig. “We were contacted by Charles Lampron, assistant-promoter at both RPM and Granby, about the possibility of bringing the RUSH Late Models to their speedways for a Quebec invasion. After a lot of thought and discussions with several people, the idea became a reality. These Quebec tracks have really stepped up to offer these great purses so their fans can experience Late Model racing in 2019.”

“We’re very excited to bring the Late Models back to Quebec,” Lampron said. “We plan on making it a memorable weekend for the drivers and the fans. “We feel this will be a great experience for our racers and the Series itself. We also have to thank our promoters in New York and Canada for their cooperation for this huge weekend.”

Canadian tracks Brighton and Humberstone will not be running Late Models during this weekend. Outlaw Speedway, our Friday night track in New York, will not run the RUSH Late Models on July 12. Saturday night New York tracks such as Fulton, Genesee, and Woodhull Speedways have stated they will accommodate racers that wish to participate in these events with details to be announced.

In years past, Le RPM and Autodrome Granby have hosted national touring series such as the World of Outlaws Sprint Cars and Late Models, Super DIRTcar Series events, All Star Circuit of Champions Sprint Cars along with the Empire Super Sprints.


Lampron has stated that racers can stay overnight at the tracks. The restaurant at RPM can be opened in the morning. Also, the race shop at Granby will be made available if drivers have any issues on Friday night. Racers will be sent additional details on rules and other pertinent info on the events. Any racers not currently on the driver list, should e-mail info@rushracingseries.com.

The Sweeney Late Model Touring Series has made many stops over the years in the Canadian providence of Ontario at Humberstone and Merrittville Speedways. The most recent appearance north of the border was on May 22, 2017 at Merrittville when Charlie Sandercock made history by becoming the first Canadian to win a Tour event.

New York residents can enter Canada with an enhanced NY license. Passport cards (Canada, Mexico, Bermuda & Caribbean) can be obtained for $65. Passports take 4-6 weeks to receive or 2-3 weeks when expedited for an additional $60. For more information, check out https://travel.state.gov/content/travel/en/passports/requirements/forms.html.

The 2019 Sweeney Touring Series schedule continues to come together as currently there are now at least six events that will pay $4,000 or more to win! The schedule is expected to be completed sometime later in January.

Le RPM Speedway is located at 546 Rue De l’Ecole in Saint-Marcel-de-Richelieu, Québec, J0H 1T0. The track is a 1/4-mile in size and can seat 2,000 people. For more information, check out their website at www.lerpmspeedway.com and “like” them on Facebook at www.facebook.com/RpmSpeedway.

Autodrome Granby is located at about an hour west of Montreal at 1268 Cowie Street in Granby, Quebec, J2J 0H2. Nous sommes environ à 1h à l’Ouest de Montréal et 2h à l’Est de Québec. The track is 1/2-mile in size and is considered to be the fastest dirt track in Canada. Nos infrastructures font partie des meilleures de l’industrie avec des estrades pouvant accueillir plus de 6 000 personnes. Their infrastructures are among the best in the industry with seating that can accommodate close to 6,000 people. For more information, check out their website at www.autodromegranby.com and “like” them on Facebook at www.facebook.com/AutodromeGranbyOfficiel