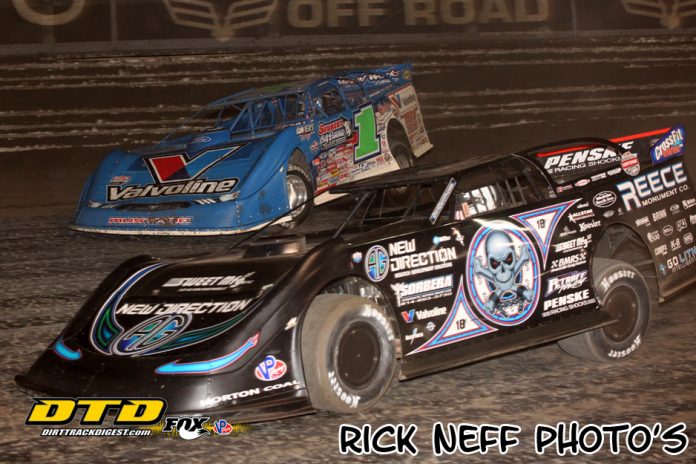 BARBERVILLE, FL – Lanigan. Bloomquist. Richards. Clanton. Moyer. These are just a few of the legendary names in dirt Late Model racing history who have made their mark on the famed Volusia Speedway Park. The warm Florida temperatures, the palm trees, the Big Gator trophies and the roar of thousands of people when the checkered flag falls after each of the 12-straight nights of racing is what keeps drivers and fans coming back for more every year.

Forty-seven years of competition at “The World’s Fastest Half-Mile” has spawned tons great racing under many catchy event monikers, seen many iconic trophy styles and privileged certain drivers with special bragging rights that never expire. A feature win at the DIRTcar Nationals is what each participating driver eyes at the beginning of every racing season.

The World of Outlaws Morton Buildings Late Models have a special relationship with Volusia — it was the site of the very first race back after 13 years of dormancy. Steve Francis earned the victory that February night in 2004, opening the doors to a bright future of Outlaw stars making their mark on dirt Late Model racing history. Over the span of 40 completed Outlaw races at the track, 18 different drivers have tasted victory.

This year, in the 48th running of this illustrious event, the World of Outlaws Morton Buildings Late Model Series will hit the track once again for four consecutive nights of racing, Feb. 13-16 – only the third time in Series history the schedule boasts four straight races at the facility.

Come February, each of the full-time drivers on the Outlaw circuit will be aiming to start quick at the high-speed half-mile. Some have already gotten the jump on it with success two weeks ago in Arizona; namely 2019 Rookie of the Year contender Ricky Weiss, who picked up two victories at the Wild West Shootout.


“[It was great] going out there and being able to be fast every night,” said Weiss, a native of Manitoba, Canada. “We had a few misfortunes early and the track was a little different, took a little bit to tweak it… But our momentum is definitely high and we’re looking forward to getting back in the seat.”

Weiss, last year’s North-South 100 winner at Florence Speedway, turned a lot of heads and spoke volumes to his talent on big half-miles. Weiss also has one start at Volusia, in Scott Bloomquist’s ride, but the finish wasn’t the way he planned. This year, he hopes to retain the same success he earned at Florence and transmit that into his own efforts on the high-speed ovals.

“We’ve been running more and more with Super Late Models, a little bit all over [the country] with the softer tires,” Weiss said. “We’ve got a pretty good baseline down now. We’ve been working a lot with Cody [Mallory] and Scott, and it really doesn’t matter where we go, we need to contend. We’re just hoping to bring them on and have a good Speedweeks and see if we can come away with a few top-fives and look good in the points.”

If anyone else on the track knows anything about momentum, look no further than 2017 Series Champion Brandon Sheppard. Since taking over the driving duties of the Rocket Chassis house car at the beginning of 2017, “The Rocket Shepp” has compiled an impressive 31 wins in 85 starts. With just one win at Volusia, he was the last Outlaw driver to hoist a gator, and the only Outlaw to taste victory at the track during Series competition last year.

After scoring the most victories on the tour last season for the second consecutive year, Sheppard ultimately came up just a bit short of winning the points championship for the second time, falling to Mike Marlar by just 28 points. This season, Marlar decided to scale back on his full-time competition schedule to make room for other ventures, ultimately turning the spotlight back on Sheppard and Series veterans Clanton and Chris Madden. In 2019, Sheppard will once again be back behind the wheel of the big-blue No. 1, backed by the craftsmanship and tutelage of car owner and chassis builder Mark Richards.

“When I go run the Rocket house car, all I have to worry about is driving the car, worrying about the track and what I need to do in the seat,” Sheppard said. “Mark and the guys take care of everything else.”

With all of the “silly season” switches and driver changes during the offseason, there’s lots of new competition to look out for and lots of storylines to be unpacked. For Sheppard and the rest of his team, it all looks the same to them. Their only goal, much like everyone else’s, is to park it in victory lane every night, no matter who’s in what car.

“That’s the biggest thing this year going into the Outlaw tour,” said Sheppard, a third-generation racer from Illinois. “It’s just about staying consistent and finishing races and, obviously, winning races. That’s what our goal is, to win races… I know that Mark Richards Racing, Rocket Chassis house car is going to be on point right from the get-go.”

Needless to say, both the rookies and veterans will be on their A-game in just a few weeks on Feb. 8-9 at Screven Motor Speedway and then at Volusia’s DIRTcar Nationals.

Once all is said and done for Speedweeks, the Outlaws head to the mountains of Tennessee for two shows on March 8 and 9, before heading out to Farmer City for the Illini 100 in the first week of April. If you can’t make it to the track, log on to DIRTVision to start your Late Model Fast Pass subscription today and watch your favorite Outlaws live, all season long!