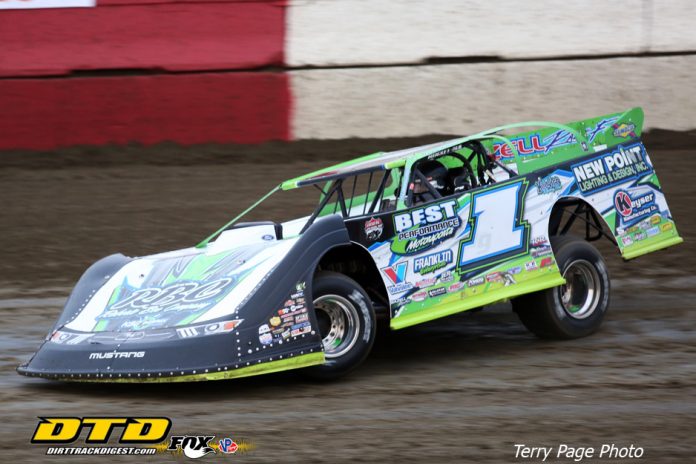 TAMPA, FLA (February 5, 2019) – Tyler Erb continued his recent hot streak as he claimed his third victory in only a four-race season thus far on the Lucas Oil Late Model Dirt Series tour.
Erb dominated the event, leading every lap of the Wrisco Industries Winternationals presented by Lucas Oil on Tuesday night at East Bay Raceway Park.
Erb started on the outside of the front row in his Best Performance Motorsports entry and pulled away from the pack at the start of the 30-lap main event. His torrid pace was only slowed by a single caution on lap eight.
Earl Pearson Jr. started alongside Erb on the front row. After dropping back as much as a full straightaway at time, he regained his momentum over the second half of the race to bring his Ronnie and Terri Stuckey-owned, Lucas Oil, Black Diamond Chassis home in second. Dennis Erb Jr. earned his best finish of the year by taking third in his Vomac Truck Sales, Rocket. Brandon Sheppard came home in fourth, followed by Jimmy Owens in fifth.
Kyle Bronson charged through the field early on, advancing from the ninth starting spot to take control second from Pearson on lap 14. Bronson then held the runner-up spot until Pearson forged ahead soon after. Pearson started to close the gap on Erb as the youngster approached heavy lapped traffic. Pearson chopped several seconds off of the Texan’s lead, but Erb skillfully maneuvered through traffic to elude the challenge of Pearson.
“I got high in turn four after I was signaled that my lead was getting smaller and smaller. I made the decision to go to the outside to pass cars after seeing [Brandon] Overton do it in front of me. Going to the outside gave us a little leeway and some space to breathe,” said the 22-year-old Erb in Lucas Oil Victory Lane.
“Like I said last night, driving for this team has been a dream come true. I am probably one of the happiest people in the world right now. I am lucky enough to be able to do this for a living. I just couldn’t imagine being with anybody better than this team at the Best [Performance Motorsports] shop. I am really thankful for this opportunity and I am looking forward to the next four nights.”
The current Lucas Oil Late Model Dirt Series point leader, Earl Pearson Jr., survived a terrific battle for second-place. “We restarted on the high-side after the caution. All-in-all it was a good night for us. The track was quite a bit different tonight. He [Erb] is really rolling through the corners well, right now. We can catch him in traffic, but in clean air, he is just a little bit better than us right now.”
Six-time East Bay Winternationals winner, Dennis Erb Jr., had his best finish of the year with a third- place run. “We have kind of struggled here the past few years. Hopefully things keep going in this direction; we have our car running pretty good right now. We need to get it dialed in a little bit better as the week goes on. The race track is in really good condition, we are able to move around a lot. You have to get the set-up right on these cars to get around here.”
The winner’s Eric and Kelly Brock-owned, Best Performance Motorsports Rocket is powered by a Durham Racing Engine and sponsored by: Roberts Bee Company, New Point Lighting and Design, Bazell Race Fuels, Sunoco, Franklin Enterprises, Valvoline, Keyser, and KBC Graphix.
Completing the top ten were Brian Shirley, Josh Richards, Kyle Bronson, Billy Moyer Jr., and Tim McCreadie.
Lucas Oil Late Model Dirt Series
Race Summary
Tuesday, February 5th, 2019
Wrisco Industries Winternationals presented by Lucas Oil
East Bay Raceway Park – Tampa, Fla.