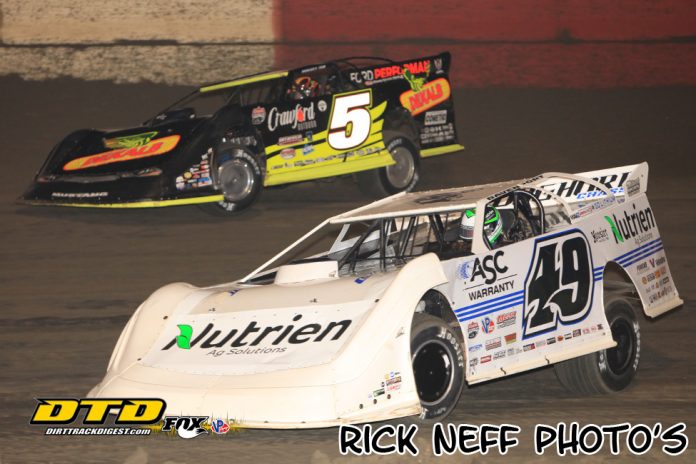 TAMPA, FL – The defending Lucas Oil Late Model Dirt Series National Champion, Jonathan Davenport survived a torrid battle with Brandon Sheppard to register his first series win of 2019 on Wednesday night at East Bay Raceway Park
Davenport took the lead from Sheppard on lap 26 and then held off Tyler Erb to win the Wrisco Industries Winternationals presented by Lucas Oil. It was Davenport’s fifth-career win at the “Clay by the Bay” and the 37th Lucas Oil Late Model Dirt Series victory of his career.
Erb’s Best Performance Motorsports, Rocket entered the event winning three of the first four events of the season and was looking for his third straight victory at East Bay. Josh Richards came from the 23rd starting spot in the Clint Bowyer Racing, Peak Antifreeze and Coolant, Rocket to place third. Brandon Overton finished fourth after starting 18th. Sheppard rounded out the top five.
A former Lucas Oil Rookie of the Year, Colton Flinner earned the first PFC Brakes Pole Award of his career and led the first eight laps of the main event before yielding to Brian Shirley on the ninth circuit.
Davenport started fifth and kept pace with the leaders before charging to the point on the twelfth circuit. Davenport held the lead until Sheppard move ahead on lap 24. Davenport quickly fought back, passing Sheppard on lap 26 to take the lead for the final time.
“I definitely wanted to see that last caution,” said Davenport. “I was getting into lapped traffic and everybody was on the bottom going into one and two. Everybody out there earned their paycheck tonight. This is the slickest place in the world. When I went into three and four, I just put it on the floor. I can’t thank my crew enough. We all put our heads together. We went back through our notes to see what we were missing on the set-up and their hard work paid off.”
Erb maintained his solid start to the season with a second-place finish. “Not winning that heat race and starting eighth probably hurt us tonight. Those restarts were wild. I was on the outside everytime and I didn’t want to be there. We had a good race going. I hated to see that caution once I got past Sheppard. I could tell that JD’s [Jonathan Davenport’s] crew was telling him to run down the middle. It was a really great night. Good job to JD, Josh [Richards], and Sheppy [Sheppard]. It was a crazy and exciting race for sure.”
Richards overcame issues in his heat race and rebounded with a strong third-place run. “We had a long night. The motor hadn’t been running right. We have had some fuel problems the last few days. I told the crew something wasn’t right. We made a change right before the feature and I was just going to ride around there and it started going pretty good. We had a shot at the lead, but I’m happy to finish third.”
The winner’s Lance Landers Motorsports, Longhorn Chassis is powered by a Cornett Racing Engine and is sponsored by: Nutrien Ag Solutions, Spartan Mowers, ASC Warranty, Penske Racing Shocks, Valvoline, and Mega Plumbing of the Carolinas.
Completing the top ten were Kyle Bronson, Earl Pearson Jr., Brian Shirley, Don O’Neal, and Devin Moran.
Lucas Oil Late Model Dirt Series
Race Summary
Wednesday, February 6th, 2019
Wrisco Industries Winternationals presented by Lucas Oil
East Bay Raceway Park – Tampa, Fla.