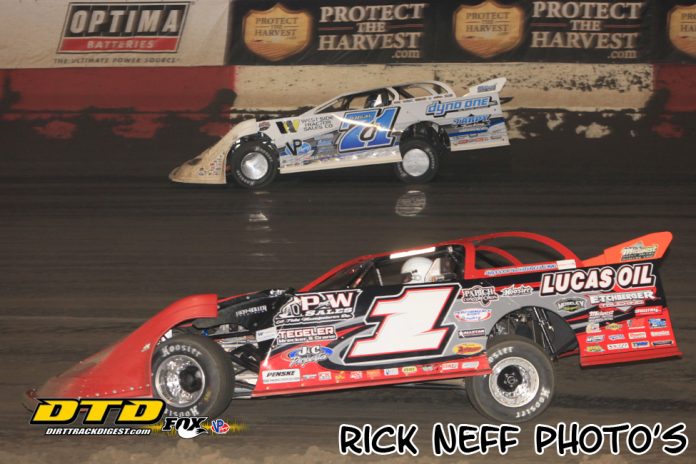 TAMPA, FL – Hudson O’Neal rallied from a lap ten caution to stun the Lucas Oil Late Model Dirt Series field on Thursday night at East Bay Raceway Park.
O’Neal charged ahead of race leader Tyler Erb and second-place-running Earl Pearson Jr. with two laps to go to win night four of the Wrisco Industries Winternationals presented by Lucas Oil.
Using the top groove, the 18-year-old former Lucas Oil Rookie of the Year beat Pearson to the finish line by just .031 seconds to score his first career win at the “Clay by the Bay.” He and his father Don join Jack and Jackie Boggs as the only other father-son duo to ever win during the East Bay Late Model Winternationals since the event began in 1978.
O’Neal spun in turn four on lap ten to bring out a caution flag. He restarted on the tail and began to make his way through the pack. With six laps to go he was running in ninth, but after Erb and Jonathan Davenport tangled while battling for the lead, the final caution flew for Davenport with 36 laps complete. O’Neal narrowly avoided Davenport whose mangled car was sitting against the wall between turns three and four.
On the restart, O’Neal used Davenport’s line to motor around both Erb and Pearson on the outside. Pearson snuck under Erb and then tried to make a winning move coming off of turn four, but O’Neal nipped Pearson in one of the closest finishes in Winternationals history.
Kyle Bronson led the first eight circuits until Erb, who started third forged ahead. Erb was looking for his third East Bay win of the week and held the advantage through a rash of caution flags. Pearson kept the pressure up on Erb for most of the race which set-up a thrilling finish.
“We had a really good car tonight, we just got caught up in that wreck in turn three early on. I thought I kind of took myself out it,” said the third-generation racer, O’Neal. “I found something up top. I didn’t know if it was good enough to win the race or not. I saw Davenport get up there and then he had his misfortune. I will take any one I can get. He [Davenport] showed me the line. I just took advantage of the leader not knowing what to do.”
“I started off up top, but I wasn’t making up much ground on the leaders,” O’Neal added. “Everything has to fall your way in these races to win. I can’t thank everybody enough on this race team. Thanks to Todd Burns for giving me this opportunity and for bringing me down here. It’s been a pretty tough Speedweeks so far, but tonight has me pumped up for the rest of the week.”
Pearson continued his string of solid performances with a narrow runner-up finish. “Davenport got going up top, but it was awfully treacherous out there. That’s probably one of the closest finishes ever here. I saw Davenport and Erb go out there, but I was going to stay on the bottom. All-in-all it was a good night for the Lucas Oil car.”
Erb looked like he was on his to way to winning for the fourth time this year, but came home in third. “Going to the top could have won me the race. I never saw Jonathan there. It’s just part of racing sometimes. We are just looking forward to the next two nights. We have a really fast car. I am excited to get back here tomorrow night. I just missed the bottom there the last two laps. Congrats to Hudson for coming from so far back to win.”
The winner’s Todd and Vickie Burns-owned SSI Motorsports, Longhorn is powered by a Clements Racing Engine and sponsored by: Dyno One, West Side Tractor Sales, Sub-Surface of Indiana, Tarpy Trucking, VP Fuels, and Crawford Outdoor.
Completing the top ten were Tanner English, Morgan Bagley, Brandon Overton, Allen Murray, and Austin Hubbard.
Lucas Oil Late Model Dirt Series
Race Summary
Thursday, February 7th, 2019
Wrisco Industries Winternationals presented by Lucas Oil
East Bay Raceway Park – Tampa, Fla.