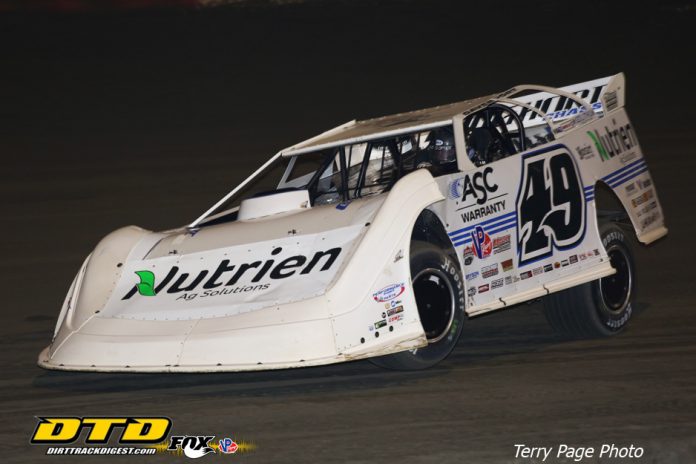 TAMPA, FL- Jonathan Davenport grabbed the lead from Tyler Erb on lap 38 and led the rest of the way to score his second win in the Wrisco Industries Winternationals presented by Lucas Oil.
Erb entered the event with two wins during the week and bolted to the lead at the start of the 50-lap main event. Erb held the lead until Davenport forged ahead with twelve laps remaining. Erb’s Best Performance Motorsports, Rocket crossed the stripe in second followed by Earl Pearson Jr. in the Ronnie and Terri Stuckey-owned, Lucas Oil Products, Black Diamond Race Car.
Completing the top five were Scott Bloomquist in the STEEL-IT, Sweet-Bloomquist entry, and Devin Moran in the Big River Steel, Dunn-Benson Ford, Rocket.
Davenport made his way to Lucas Oil Victory Lane for the 38th time in his career, joined by his son Blane. “I just want to thank all of the fans for coming out tonight. Knowing that tonight was a point race, we really wanted to put on a good show. We have had a really good car here the last three nights. When I turned under Erb to get the lead he left me some room there where there was some brown on the race track. Congrats to him [Erb] and Earl [Pearson] for both putting on a good run tonight as well.”
“We have such a great race team,” Davenport added. “Thanks to Lance Landers for putting this together. Thanks to my crew: Jason, Tyler and Lance they do such a great job. Gavin [Landers] is here this week and Brewster back at the t-shirt trailer. The track has been racy all week. This is what we love doing. We come down here to compete and mix it up with everybody and you never know who is going to win.”
“It was crazy when the bottom kind of died there,” said Erb. “The top got faster in one and two. I just went up top and out of a lucky chance I could run there. We got to three-wide for the lead and that’s when JD got by me. Congratulations to JD and his team, they had a great car, Earl did too. We will take second tonight, it was another podium finish for the team, and we will come back tomorrow night.”
Pearson was runner-up to Hudson O’Neal on Thursday night and took third behind Davenport and Erb tonight. “This is all for the guys here they have worked their tails off during the winter. We went to Arizona to try some stuff out there. My Black Diamond Chassis has been really good since we have come down here. It has been a very good week for us, and we will keep digging.”
The winner’s Lance Landers Motorsports, Longhorn Chassis is powered by a Cornett Racing Engine and sponsored by: Nutrien Ag Solutions, ASC Warranty, Spartan Mowers, Penske Racing Shocks, Valvoline, and Mega Plumbing of the Carolinas. His crew chief is Jason Durham.
Completing the top ten were Tim McCreadie, Billy Moyer, Jr., Jason Jameson, Mike Benedum, and Jeff Mathews.
Lucas Oil Late Model Dirt Series
Race Summary
Friday, February 8th, 2019
Wrisco Industries Winternationals presented by Lucas Oil
East Bay Raceway Park – Tampa, Fla.