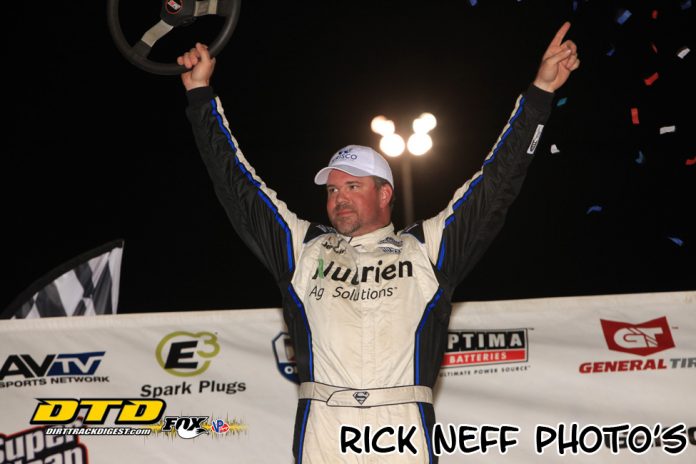 TAMPA, FL – Jonathan Davenport withstood an incredible ten-lap battle to win the Wrisco Industries Winternationals presented by Lucas Oil finale on Saturday night at East Bay Raceway Park.
Davenport took the lead for good from Tanner English on lap 45 and scored his third win of the week at “The Clay by the Bay.” Davenport came alive in the final 15 laps of the 50-lap main event as he powered his car around the top side of the track. English led the majority of the race, and then battled Davenport in heavy lapped traffic lap after lap. The caution flag waved on lap 47 for Earl Pearson Jr., who was forced to pit for a flat tire.
Davenport then dashed to the finish line for his 39th career Lucas Oil Late Model Dirt Series win. Tyler Erb slipped by English with two laps to go to finish in second. Devin Moran barely edged out English at the finish line to take third. English led 40 of the 50 laps before coming home in fourth, with Justin Williams scoring the best Lucas Oil Late Model Dirt Series finish of his career rounding out the top five.
“I knew we had a really good car, it was a little bumpier out there tonight. I was just trying not to buzz my tires. I just wanted to save my tires until the last ten laps. We went with a little different set-up tonight,” said Davenport, the 35-year-old, two-time National Champion.
“The car hasn’t felt good the last two nights even though we won,” Davenport added. “Tanner did a great job tonight. I have driven that car for Randy [Weaver] and Chip [Stone] so I knew they were going to be tough to outrun. This was a heck of a race track tonight. I really didn’t know where to go at the end. I knew Tanner was better on the bottom than I was. I saw there was a little bit of brown in the middle, and the top was getting so dirty.   I don’t know if there were other guys running up there or not.”
Erb continued his early season success finishing in the runner-up spot. “I stayed on the bottom for a while, then I moved to the top. The track has been different every night this week. About one out of every five laps I might make up some time. That last caution helped us get by Tanner on the restart. It was another good run we can’t be unhappy with second. It’s been a really good week, I hate to leave this place.”
Moran moved his Big River Steel, Dunn Benson Ford, Rocket into fifth place in the championship point standings with his third-place finish. “We just got around up there where nobody else was running. Our car still didn’t have the right balance we needed. We just kind of did what we had to do to get up there. We ended the week with three top-five finishes, so we made a lot of progress throughout the week. If we can just start up front, we should be in the contention for a win here soon.”
The winner’s Lance Landers Motorsports, Longhorn Chassis is powered by a Cornett Racing Engine and sponsored by: Nutrien Ag Solutions, ASC Warranty, Spartan Mowers, Penske Racing Shocks, Hoosier Tires, Valvoline, Mega Plumbing of the Carolinas, and Hawkeye Trucks.
Completing the top ten were Jimmy Owens, Josh Richards, Shanon Buckingham, Billy Moyer Jr., and Kyle Bronson.
Lucas Oil Late Model Dirt Series
Race Summary
Saturday, February 9th, 2019
Wrisco Industries Winternationals presented by Lucas Oil
East Bay Raceway Park – Tampa, Fla.