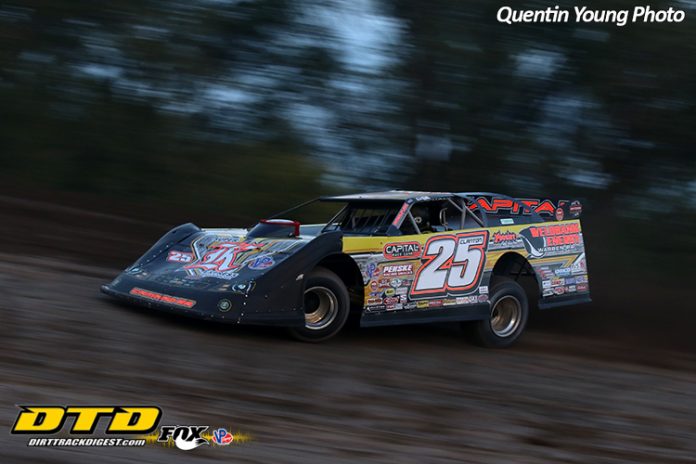 Clanton, the 2015 Series champion from Zebulon, GA, had gone 51 races without a win before earning his fourth victory at Screven and 43rd all-time in World of Outlaws competition, holding off Kyle Hardy and Chase Junghans to the checkered flag.

According to “The Georgia Bulldog” himself, going winless last season never actually bothered him as much as most fans thought it would have. In fact, he used the dry spell as fuel to get better. Now that the monkey is off of his back, Clanton will look to build on this momentum as the current points leader heading into Volusia, where he has been so dangerous in past years with five wins since 2015.

“It feels real good,” Clanton said. “To go almost a year and a half… like I said at the banquet [last year], it just makes you mad. And the guy who wins, it just makes him more determined to come back and win again, and that’s what we’ve done. We’ve worked awful hard over the winter to build a new racecar here.”

In what was almost a perfect night, Clanton qualified second overall out of 39 cars, won his heat race and redrew the pole for the Morton Buildings Feature. Taking the lead on lap 1, he faced several long strings of lapped traffic, as the race’s first caution didn’t fly until lap 45 – a complete night-and-day difference from Friday night’s Feature, which saw numerous cautions and even a red flag. Maneuvering around lapped traffic on any given night is hard enough, let alone doing it on a one-lane racetrack. But Clanton was able to handle the pressure from those behind him, much like all great veterans of the sport do.

“I guess it’s lucky to get number one but I think our car was good enough to pass a couple of cars,” Clanton said with the biggest smile on his face. “I was just biding my time, trying not to get into too much lapped traffic, just didn’t want to get myself in a bind. We rode a long way, and to come up with the win, it’s pretty special.”

And how special it was for Clanton and the Capital Chassis stable this weekend, with Chris Madden putting his Capital on the podium in Friday night’s race and a top-10 on Saturday. Clanton said Madden’s help has been and will continue to be instrumental in Capital’s success on the tour this season.

“I’ve had some help when Chris came along after Charlotte [last year] and we went and tested my car, then we built this car,” Clanton said. “We’ve changed some things on it and evidently we’re going in the right direction, so that’s the good thing.”

Another special finish came right behind Clanton – the Viper Motorsports entrant of Rookie contender Kyle Hardy. The Virginian had a solid night on Friday, coming from 17th to finish 11th after winning his Late Chance Showdown. But Saturday night was a much different story, as he set fast time in Group B, won his heat and redrew third.

Hardy made the pass for second around Jason Covert on lap 12 and chased Clanton down the rest of the way but was never able to make the pass on the rubbered track. However, he held his own through lapped traffic, staying right with Clanton the entire way and closing a two-second gap before the lap 45 caution. Overall, a great showing by the new Barry Wright Race Cars house driver.

“It turned out to be great,” Hardy said. “We’ve got a greatly prepared car by Lance and Barry Wright, and that means the world. We ran decent last night, wasn’t the greatest, but second place tonight was, by far, great for us.”

After the 11th place on Friday night and the runner-up finish on Saturday, Hardy now leads in Rookie points by 20 markers over Ricky Weiss, who fell back to 15th in Saturday’s Feature. This gives him a big boost of confidence, heading into Volusia for the DIRTcar Nationals.

“Absolutely, it’s a huge boost of confidence,” Hardy said with a grin. “We didn’t have two bad nights, we had a decent and a great night. We’re just super happy about it and ready to get going.”

Hardy’s previous experience at Screven played right into his favor on Saturday night, as his three prior starts seemed to give him the edge over his fellow Rookie competitors.

“It definitely helped, I’ve raced here three times before and it was the fifth time over the weekend, so it turned out to be great,” Hardy said.

In what should have been another Rookie in the top five, Cade Dillard seemed to have a great fourth-place run going before tangling with Jason Covert in turn three with just two laps remaining. Dillard was obviously disappointed by the incident and the resulting 19th-place finish, but it gave him plenty to build off of heading into Volusia next week and was a great rebound, just one night after having to fight for a 14th-place run after taking a provisional.

“I had a good car in the feature,” Dillard said. “I was just riding, trying to stay out of trouble. Had a chance there at the end, got under [Covert], I’d say nearly nose-to-nose with him. I’m not sure if he didn’t see us there or saw us and just turned left… Unfortunately, it killed our good run for us.”

Up Next…
The 48th Annual DIRTcar Nationals at Volusia Speedway Park is the site of the next four Series races, Feb. 13-16. Two DIRTcar Late Model shows will preceed the Outlaws invasion on Monday and Tuesday. Get you tickets now ans don’t miss this exciting event by clicking here, or order your Late Model Fast Pass on DIRTVision and watch every lap LIVE!