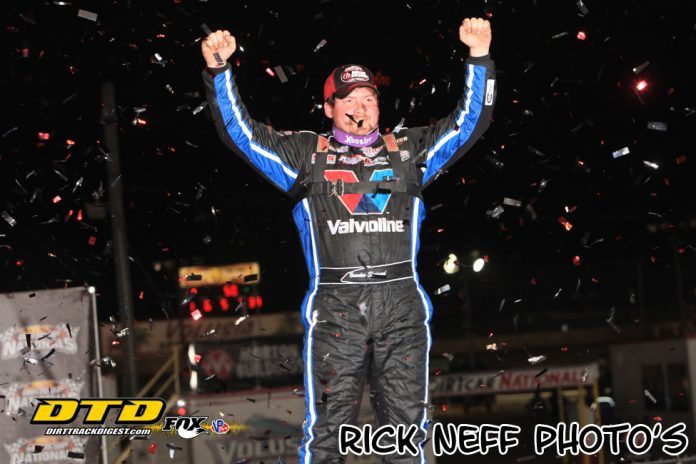 BARBERVILLE, FL – Brandon Sheppard has flexed his muscles here at the DIRTcar Nationals as he picked up his third win in four races in the Late Model Division.

“I don’t even know what to say right now, I’m ecstatic,” said Sheppard. “This team has been working their tail off and it’s showing up now. These Rocket cars are great cars, and a bunch of them run up front every night. It’s awesome to be a part of it.”

Tim McCreadie took command at the start of the 50-lap World of Outlaws Morton Builders Late Model Series main, leading early over Chris Madden and Brandon Sheppard. Madden hounded McCreadie during the early going, with Sheppard right behind. As the leaders reached traffic on lap nine, Sheppard darted under Madden and then McCreadie to drive from third to first in a split second. The caution waived the next time around, lap 10, and Sheppard was out front in his quest for three wins in a row.

Once out front, Sheppard stretched the legs and opened up a big lead. Even a lap 18 yellow couldn’t keep Sheppard close to the pack, as Madden, Brian Shirley, and others fought over second. Eventually, Shirley broke free from Madden and took sole control of second.

By halfway, many of the frontrunners, especially Sheppard and Shirley, found comfort on the cushion. Initially, Sheppard opened up a two second lead after the restart, but as the laps ticked away and the halfway signal was given, Shirley was visibly closing the gap on the leader. A lap 27 yellow made Shirley’s job easy, allowing him to line up next to Sheppard. However, Shirley did not fire well on the restart, and Madden took the spot back. With 20 to go, Shirley got the spot back, and Madden surrendered third to Kyle Bronson.

As the laps ticked away, Shirley kept Sheppard within striking distance. With 11 laps left, Bronson found the turn one wall and then was struck by Jonathan Davenport and Madden, ending all of their good runs.

Sheppard had been excellent on restarts all night, and this one on lap 39 was no exception, putting a small buffer between himself, Shirley, and now Mike Marlar. With eight laps left, Marlar shot a slider to claim second, looking for his second win of the week. As the laps wound down, Marlar closed in, within a car length with three laps left. Trying various lines in the final laps, a car length was as close as Marlar would get, as Brandon Sheppard grabbed his third World of Outlaws win in a row over Mike Marlar, Brian Shirley, Don O’Neal, and Darrell Lanigan.