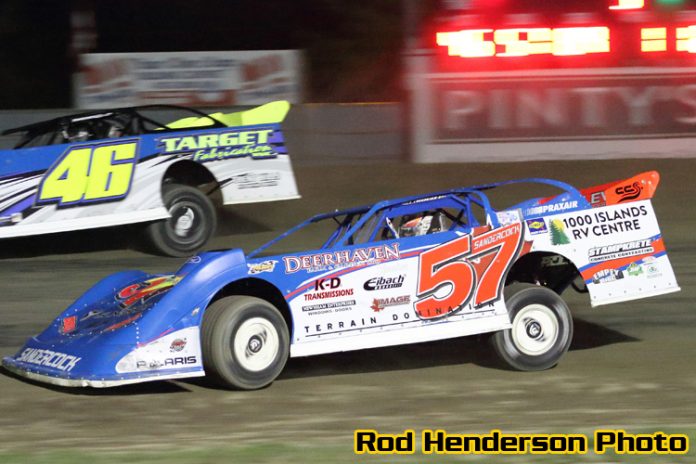 After a successful inaugural season the Vanderlaan Building Supplies Northeast Late Model Association will return to Southern Ontario and Upstate New York Tracks in 2019. The association that started between local area Late Model tracks to help showcase the great Late Model racing in the Northeast is looking to build on the promising first season.

More than 70 drivers took part in at least one event while 60 plus drivers took part in at least one home track event and one combined event. No one driver had more success in 2018 than Trenton, Ontario driver #57 Charlie Sandercock who swept the six combined race events including the season finally at Fulton Speedway besting a season high 28 cars with a broken right foot. Kyle Sopaz finished runner up in 2018 with four top 5 finishes in the six events including a second place at the Cornwall Motor Speedway in August.

The Vanderlaan Building Supplies NLMA is a partnership between the Brighton Speedway, Fulton Speedway and Humberstone Speedway that provides the local Late Model talent a chance to venture outside their weekly home tracks without breaking the bank to travel and test their talent against other local talented drivers. All the events pay a minimum of $1,000.00 to win making it worthwhile for the drivers yet affordable purses for local tracks.

Another goal of the NLMA schedule is to promote participation at the home tracks weekly shows by awarding home track points at two weekly events that go towards the driver’s year end point total. All home track events are held prior to June 29th when the combined schedule kicks in on June 30th.

The combined schedule kicks off with double header Canada Day long weekend in the Niagara region. Sunday June 30th the NLMA will be part of Humberstone Speedways $1,000.00 to Win Showdown Sunday where all classes in attendance will race for $1000.00 to win. From Humberstone the drivers will head up twenty minutes up the highway to the Niagara Regions other dirt track for Merrittville Speedway’s Canada Day Special on Monday July 1st.

August 11th the NLMA resumes its combined schedule with a return to Cornwall Motor Speedway. Last year the ¼ mile speedway provided a super tacky and fast surface that saw exciting racing throughout the field including a fierce battle up front between Sopaz and Sandercock.

In September the NLMA will see its second double header of the season at the return of the Brighton Speedway Applefest Shootout Weekend on September 21st and 22nd. As part of the action packed weekend the Annual Great Crate Race will pay $4000.00 to the winner as the NLMA’s highest paying event of the season.

The Finale will take place one week later on September 27th at the Fulton Speedway as part of its biggest weekend of the season “the Outlaw 200 Weekend”. This is one of dirt racings crown jewel events in the Northeast and continues to set competitor and attendance records.

A number of sponsors stepped up to support the NLMA in 2018 that allowed for the tracks to pay a point fund of over $12,000.00 to drivers from all three tracks and many are returning in 2019 with hopes to top that number in the coming season.