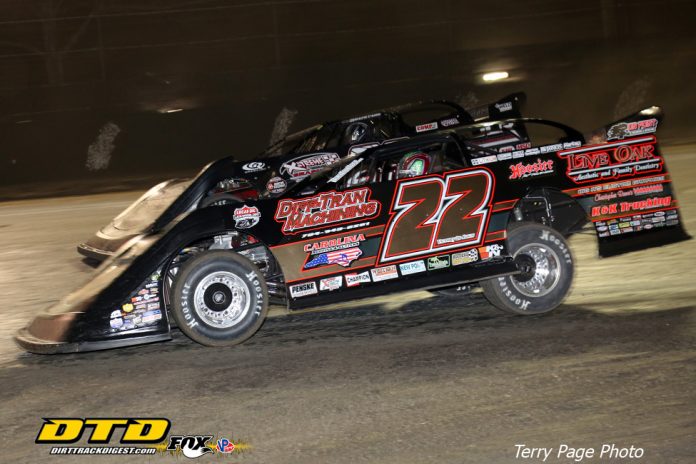 Ferguson grabbed the lead away from Ross Bailes on lap three and never looked back on the way to his first win on the tour which made him the 26th different winner in now 55 Spring Nationals events to date. Ferguson drove the Clements Racing Engines-powered Sweet-Bloomquist Race Car to the win with sponsorship from RPM Truck & Trailer Sales & Service, Live Oak Aesthetic & Family Dentistry, Champion, Langley Collision Center, Carver & Son’s Roofing and Keith’s Handyman Services.

Polesitter Ross Bailes and Ferguson brought the 23-car-field to the green flag with both drivers in hot pursuit of the point. They would both battle it out for the top spot with Ferguson ultimately coming out ahead on the third circuit. Three cautions slowed the field on laps 30, 41 and 54. After the final yellow with six laps to go, Ferguson held off fifth-starting Michael Page for the payday. Completing the top-five included Friday’s winner Dale McDowell third, Donald McIntosh and Travis Pennington. Movers through the field included Ashton Winger who rallied from 17th to finish eighth while Austin Horton started 19th in the main event and finished tenth.