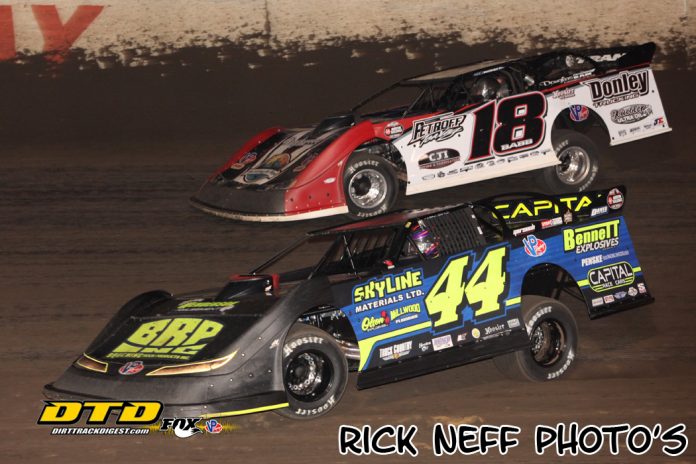 CONCORD, NC — The World of Outlaws Morton Buildings Late Model Series kicks into high gear in May, and the drivers certainly are ready to pick up the pace.

Several drivers took time to discuss the season so far and what’s ahead:

• Rookie and Canada native Ricky Weiss of Headingley, Manitoba, on his season to date: “It’s been pretty good, pretty consistent. If we can stay on that, I think we’ll be good. It’s how we ended last year. We know if we can finish with top-fives and top-10s, we’ll be happy.”

• Chris Madden, of Gray Court, SC, on progressing with Capital Race Cars: “We’ve definitely had some speed in our racecar. I think we should have a few wins in there, just some circumstances didn’t allow us to get them. Overall, I think we’ve had a great season to get started with so far. [I’m] just really looking forward to getting some more races under our belt with our new team. The chemistry between everybody seems to be working really well, so no problems there to worry about.”


• 2015 Series Champion Shane Clanton, of Zebulon, GA, assessing his start to 2019: “It’s not bad. Probably a B, or a B-minus. Just because we got that win, doesn’t mean our cars are great, but we’ve done a lot of changes in the past three weeks and it seems to be okay.”

• Three-time Series Champion Darrell Lanigan, of Union, KY, on his return to the World of Outlaws tour: “It’s been decent. I think we’ve had a top-10 in every race. We’re bringing out a new chassis and new motor program, so I’d definitely give it a B-plus.”

• Madden, on returning to his home track of Cherokee Speedway: “The biggest thing about racing around home, to me, is my fanbase. That’s where I’m from, and it gives [my fans] an opportunity to come out and see not only me but the other guys that travel around with us. They get to see all of us race and it’s pretty exciting to have one of the ultimate, elite racing series come into our hometown. It’s a pretty big deal to me, and I’m just proud to be a part of it.”

• Madden, on pressure of racing so close to home: “There’s probably more pressure racing at home than there is out here on the road because everybody expects you to win. Well, winning’s not that easy anymore, I don’t know if people realize that or not. When you win now, it’s a great success to be able to achieve. I think we’re on the verge of getting a few wins here. … Obviously, I want to win, that’s what I go for. You definitely don’t want to let everybody down. Everybody’s there to see you win. Sometimes, you feel like you’ve come short of succeeding, but it’s not for a lack of effort from me or my team. However the outcome is, it’s going to be how it’s going to be. Our goal is to win and give my fans a victory there at home.”

• Clanton, headed back to Cherokee where he won in 2017: “We ran good there last year. That was one of our only top-two runs that we had last year, so we’re looking forward to going back and hopefully getting a win.”

• Lanigan, who is second in the championship standings heading to Cherokee: “We’ve raced pretty decent there. We’ve got a couple wins down there, so I’m excited about [going back].”

• Brandon Sheppard, Illini 100 champion who hails from New Berlin, IL: “It’s definitely a lot different than what I’m used to. It’s red dirt, long straightaways, tight corners. Definitely a really dirty racetrack, but I felt like it made for a pretty good race, especially in the feature when the track slowed down a little bit. It was definitely a fun place, and if they’ve got the track anywhere close to where they had it last year, it should be fun again.”

• Weiss, on going to Lancaster and Cochran, new tracks on the 2019 schedule: “We know the cars that are relatively fast everywhere we go, so we just judge [based on] them. Hopefully, our base setup is pretty decent for that, which it has been everywhere else we’ve been so far, so I don’t see why it wouldn’t [continue].”

• Sheppard, on seeing new tracks: “It’s always fun to go to new tracks and go to different places. It’s just more places you can check off the list. I love going to new racetracks and places I haven’t been before, so it’s cool. … I’ve heard a lot of stuff about Lancaster. I’ve watched some people practice at Cochran this year on videos and stuff, and it looked like a pretty cool place too.”

• Rookie Cade Dillard, of Robeline, LA, on seeing new tracks: “Once you get there, you’ve just got to compare it to something compatible that you’ve been to, to get you in the ballpark. It helps too that [my chassis builder] Jimmy Mars has been to the majority of the tracks in the country, so he’s always had really good feedback on what to expect and what’s a good starting point. The biggest thing, for me as a driver, is just getting experience at them all. They’re all new to me and they’ve all been pretty unique so far.”

• Weiss, on going to Fayetteville for the $25,000-to-win First in Flight 100: “I actually like the bigger speedways. I like the speed and the finesse that it brings out of the driver – it just seems to fit my driving style. That, and the dryer [the track] gets, the smoother it gets, the longer [the race] gets and the better we are.”

• Clanton, on bigger tracks like Fayetteville: “Any time you can stretch the legs out on the motor, it’s fun to drive, knowing that you run that fast.”

• Lanigan, looking forward to the challenging for the $25,000 top prize at Fayetteville: “Fayetteville’s definitely a big, sandy track. We’ve been there and got a win there also. I like some of the big tracks coming up, we’ll see what we’ve got.”

• Dillard, on tracks of comparable size since he’s never been to Fayetteville: “We ran pretty good at Arizona [Speedway], and we’ve had a lot of success there. Where I come from, it’s usually just small, 1/4-mile bullring-type stuff. So, I don’t really have a ton of experience on [tracks like Fayetteville], but this whole year is just about learning it all in general, so we’ll definitely do our best.”

• Lanigan, looking ahead to Muskingum County and Wayne County: “We’ve been to both of them, and we’ve actually got a win on both of them so I’m definitely excited to go there.”