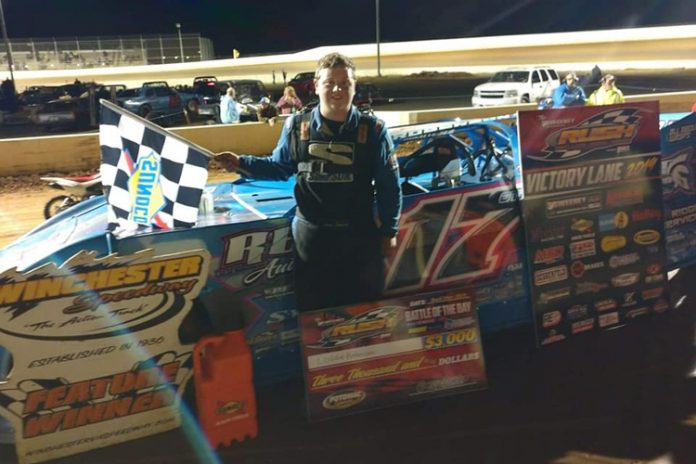 WINCHESTER, VA – The Sweeney Chevrolet Buick GMC RUSH Dirt Late Model Touring Series presented by Pace Performance headed to Winchester Speedway on Saturday night for the finale of the second annual “Battle of the Bay” Speedweek presented by Wehrs Machine & Racing Parts. After torrential rains fell on Friday night that washed out round three of Speedweek at Potomac Speedway, sunshine and mild conditions returned for Winchester as 44 race teams from seven different states plus Ontario, Canada participated. Seven of the eight Speedweek events have now been completed over the two years with car counts over 40 for every event including a high of 53 on Wednesday night at Delaware International Speedway.

For the second straight year, Logan Roberson closed out Speedweek victorious at his home track; however, this year, wasn’t able to overcome Max Blair for the $1,000 title. Roberson inherited the lead after race-long leader Ross Robinson lost a driveshaft, but yielded the lead to Blair when racing resumed on lap 20, then would out-duel Blair on the following lap to regain the top spot and went on for his first Sweeney Tour win of the season. Roberson earned $3,225 for his night’s work along with a Sunoco 5-Gallon Race Jug plus $500 for his runner-up in Speedweek points.

“We had something in our playbook,” revealed the 21-year-old Waynesboro, Virginia standout when asked if he had anything for leader Robinson. “My dad was signaling me to slow down and wait for lapped traffic to hopefully get him. He (Robinson) was very good. I hate to see that bad break for him, but we’ll take it any way possible. We’ve had a great season so far. We struggled the first two nights of the Battle of the Bay and wasn’t as good as I wanted to be, but we came home and took the win. It feels good to win here for me and my family- it’s awesome.”

After passing Roberson to win the dash, Robinson took off in the lead over Roberson and Blair at the start of the 30-lap feature, which was initially aborted twice by multi-car accidents. Following a caution with eight laps scored for Dale Hollidge, Matt Hill moved past Jeremy Wonderling for fifth. Robinson had about a half-straightaway lead on Roberson when he caught lapped traffic on lap 19. That lead would shrink the following lap until Robinson came up lame in turn three after losing the driveshaft. Robinson entered the night just four points behind Blair in both the Speedweek and Tour point standings, and his misfortune would earn him the TBM Brakes “Tough Brake of the Night”.


Roberson would then inherit the lead over Blair, Devin Brannon, Hill, and Wonderling. Another caution would slow action when Brannon spun and collected Jennae Piper with still 19 laps scored. When racing resumed, Roberson and Blair were side-by-side the entire lap with Blair using the outside to nose ahead to lead the 20th circuit, while Jeremy Wonderling and Charlie Sandercock passed Hill for third and fourth. Blair though would be unable to maintain the lead on lap 21 as Roberson made the inside work to snatch the lead for good.

The last 11 laps would go caution-free as Roberson pulled away from Blair every lap to take the checkered flag first by 2.051 seconds for his third Winchester win of the season in four starts and fourth overall in RUSH-sanctioned competition. The victory was Roberson’s third of his career in Sweeney Tour action and came in the Dirt Defender/BTS Towing Service/Russ King Racing/Wynbridge/Swift Springs/Zmax/Virginia Motor Speedway-sponsored #17.

Though Blair was disappointed with his second place run, he’ll leave the Mid-Atlantic with approximately $9,925 in earnings in just three nights and will take his Sweeney Tour point lead to his home tracks of Stateline and Eriez next month.

“We were a little free, but I think it was maybe the tire difference,” explained Blair. “He had a different tire on than I did. We were alright. I think we had a shot at it if there was a little more room getting off turn two on that last restart, but it is what it is. Those guys are always tough here and you know that when you come here so congrats to them. The points came into it during the race. I knew when Ross was leading if I could finish third I’d still win it, but if I got passed I wouldn’t. He then broke a driveshaft and it went everywhere. I hit some pieces and was hoping it didn’t hurt anything under the car. I knew once that happened I had some breathing room for the points and could race hard for the win.”

For the second straight year, Wonderling ended Speedweek with a podium finish and the defending Sweeney Tour champion has now finished in the top 12 of all seven Speedweek races over the past two years! Wonderling will also receive the Ontime Body & Graphic “Spoiler Alert” $150 rear spoiler.

“I’ve been decent but haven’t had the results,” stated the Wellsville, NY racer. “The first couple tracks were difficult for me. I’m not used to being on stuff like that. To come down here and finish third with these caliber of racers and the amount of cars is tough. I have to thank Jim Stephens. We’ve been working on this car and getting it better and better. I didn’t have anything for those two though (Roberson and Blair).”

After a disappointing finish the first two nights of Speedweek, Sandercock closed out the “Battle of the Bay” with a strong fourth place effort for his best ever finish in the seven races over the past two years. Sandercock started 12th and was halfway to the front before being shuffled back on a restart then charged back forward. Sandercock fought for the third position with Wonderling over the final 11 laps, but couldn’t make the pass. `

Hill was fifth. After not coming in the first two events of Speedweek, Matt Latta made the trip down from northeast Ohio and netted a sixth place finish after starting 11th in his season debut. Jakob Piper raced from 16th to seventh. After getting caught up in an opening lap accident, Kyle Lukon came all the way back to finish eighth. Nick Davis was ninth as 18th starting Braeden Dillinger completed the top 10. After taking a Series provisional and starting 25th, Michael Duritsky, Jr. made his way to 12th at the finish to earn the $100 Precise Racing Products “Pedal Down” Hard Charger gift card.

Sam Pennacchio closed out Speedweek by capturing the Non-Qualifier victory in his Duguay Haulage-sponsored #311. After finishing a close third in Thursday’s Non-Qualifier at Georgetown, Pennacchio dominated the 10-lap caution-free affair. The Niagara Falls, Ontario, Canada racer earned $200 and became the 35th different winner in 41 races run all-time in the “Wheelman” Bonus Event Challenge Series. Track regular, Timmy Booth, passed Kyle Murray on lap two to finish second. Chuck Bowie and Al Shawver, Jr. also got by Murray on lap four to finish third and fourth respectively. Murray dropped to fifth in his first ever visit to the track.

ARC Racing and Round Hill Auto Service presented the “$500 Club” as the five $100 drawings for racers in the top 15 of Winchester track points went to Roberson, Feathers, Jakob Piper, Booth, and Levi Crowl.

The Sweeney Tour will resume action on Saturday, May 18 at Stateline Speedway in Busti, NY for the “Bill Law Memorial” followed up on Sunday at Eriez Speedway in Erie, Pa. Both “Marquee” events will pay $2,000 to-win, $225 to-start.