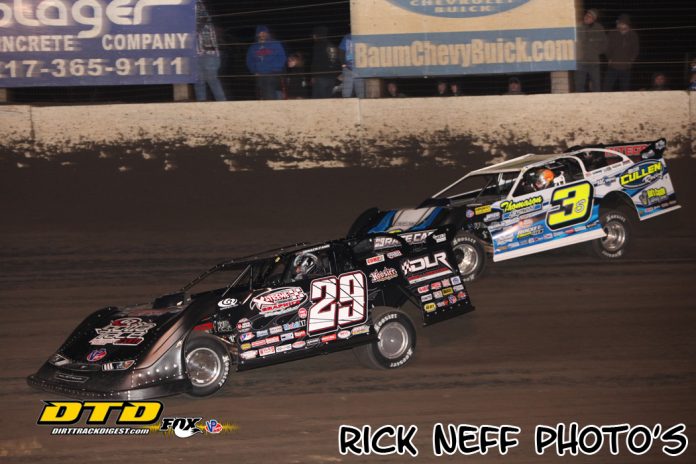 CONCORD, NC – The World of Outlaws Morton Buildings Late Model Series kicks off a busy month of May this Friday and Saturday at Cherokee Speedway and Lavonia Speedway, with South Carolina-native Chris Madden hoping some home-cooking is what he needs to put himself in victory lane for the first time this season.

A two-time Series championship runner-up, Madden did a final tune-up last weekend to prepare for the busy month ahead, finishing second at Smoky Mountain Speedway on Friday and third at Dixie Speedway the very next night. This Friday, May 3, he’ll have what he would consider his best chance at getting his first World of Outlaws win this season at Cherokee Speedway – his home track.

“The biggest thing about racing around home, to me, is my fanbase,” said Madden, who’s race shop is located in Gaffney, not far from Cherokee. “That’s where I’m from, and it gives [my fans] an opportunity to come out and see not only me but the other guys that travel around with us. They get to see all of us race and it’s pretty exciting to have one of the ultimate, elite racing series come into our hometown. It’s a pretty big deal to me, and I’m just proud to be a part of it.”

The field will be extremely competitive. While veteran racers like Madden have been battling on the tour for a number of years, several rookies have been learning lessons quickly and applying them in local and regional competition when not on the road.

Showcasing how far they’ve come since joining the Series in February, the Rookie of the Year class just bagged a total of three wins in two days last weekend.


Ricky Weiss kicked things off last Friday night with a win at Smoky Mountain Speedway, while Cade Dillard picked up his second Super Late Model win of the year at his home track of ShowTime Speedway in Many, LA. Finally, Kyle Hardy scored a victory on Saturday night at the Winchester Speedway in Winchester, VA – his first of the season for Viper Motorsports and Barry Wright Race Cars.

Earlier in April, several more of the Series veterans scored good finishes in preparation for this month’s action, too. Chase Junghans, who currently sits tied for third in Series points, picked up a win at the Davenport (IA) Speedway on April 19 – his first of the season aboard the ShopQuik #18. Championship leader Brandon Sheppard also continued his incredible hot streak by scoring another pair of back-to-back podium finishes at Atomic Speedway on April 11 and Hagerstown Speedway on April 13.

Friday at Cherokee and Saturday at Lavonia, Sheppard will lead the Outlaws back to the green flag and hopes to defend his Lavonia victory from last year. Can he get it done? Check out the action in person, or if you can’t be there tune into DIRTVision.com.

WHEN & WHERE
Friday, May 3 at Cherokee Speedway in Gaffney, SC
Saturday, May 4 at Lavonia Speedway in Lavonia, GA

TICKETS
Tickets will be available for purchase at the track on the day of the events.

AROUND THE TURN: The World of Outlaws Morton Buildings Late Model Series next heads to Fayetteville Motor Speedway in Fayetteville, NC for the First in Flight 100 on May 10 and 11.