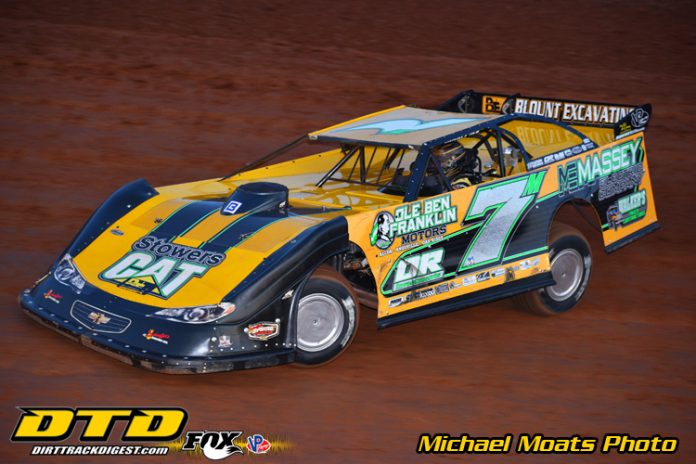 CROSSVILLE, TN – Donald McIntosh claimed his second-straight Schaeffer’s Oil Spring Nationals Series presented by Sunoco Race Fuels victory of the season on Friday May 17 at Crossville Speedway in Crossville, Tenn. McIntosh closed the points lead that Dale McDowell had going into Crossville to just four markers heading into Thunderhill on Saturday. McDowell took the green then slowed with mechanical problems thus ending his race and having to spectate from the infield.

The Dawsonville, Ga. driver collected $4,000 for the win while driving the Blount Motorsports, Massey Electric, Blount Excavating and Stower’s CAT-sponsored Rocket Chassis which is powered by a Vic Hill Racing Engine. This was McIntosh’s fifth career Spring Nationals Series victory as the series rolled in for the seventh points race on the tour.

Polesitter and new track record holder Ross Bailes set a blistering pace on the initial start of the race but sixth-place starter Dale McDowell would slow on the backstretch during the initial green and slow the field. McDowell would retire to the infield with mechanical issues. Bailes would lead again for the restart and maintain that position until lap 14. After a caution flag flew for Tommy Taylor slowing in turn two, the 14th lap seemed to be the lap that would keep on giving, literally. On the restart, Tanner English slowed with a right-rear flat tire. Then under caution, race leader Ross Bailes slowed with a right-rear flat as well. On the third try for a restart, fifth-place Jeff Neubert slowed on the backchute with a right-rear flat tire as well. The final yellow would wave on lap-28 as Scott Cook shreds a right-rear flat tire.

McIntosh would lead the remaining distance and take the $4,000 payday over Dakotah Knuckles, Robby Moses, Tanner English and Ross Bailes.

The Schaeffer’s Oil Spring Nationals Series presented by Sunoco Race Fuels returns to action on Saturday May 18th at Thunderhill Raceway Park in Summertown, Tenn. racing for $10,000-to-win. This will be the first-ever series appearance to the Jason Walker-promoted race track.