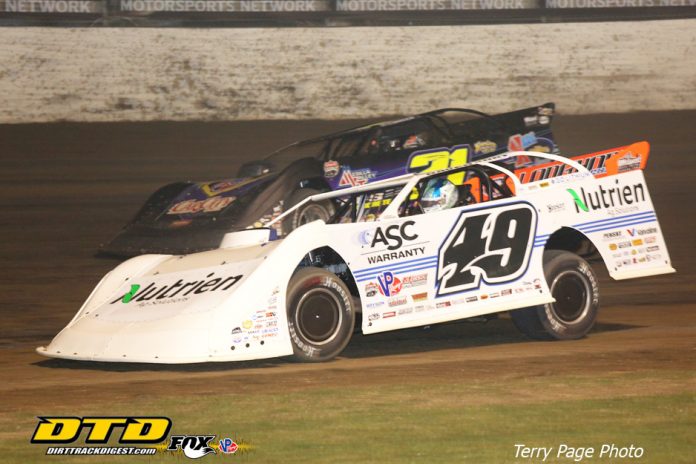 COLUMBUS, MS – Jonathan Davenport held off Tim McCreadie to win night two of Magnolia Motor Speedway’s GEICO Clash at the Mag – presented by Big River Steel. For Davenport, it was his seventh Lucas Oil victory of the season.
Davenport started from the pole and fought off early race challenges from fellow front-row starter, Mike Marlar. McCreadie passed Marlar on lap 11 for the second spot and valiantly tried to overhaul his fellow Longhorn Chassis driver in the waning laps of the race.
Devin Moran charged from the 11th starting position to finish third after passing Marlar on the final lap, earning the Optima Batteries Hard Charger of the Race. Marlar was fourth and Don O’Neal rounded out the top five finishers.
“This Lucas Oil Late Model Dirt Series is so competitive. Going out to qualify just a few cars later than we did tonight almost put us out of the top ten last night. I know that Johnny Stokes is going to keep working on this track. It’s just like tuning on our race cars, but there is a fine line. I know he will get it right for tomorrow night,” said the two-time series champion.
“I think these Longhorn Chassis have turned the corner and we’ve got them running really well,” Davenport added. “I know McCreadie finished second tonight, so they have their program running for the win as well. We have tried several different things with these and right now we are spot on. We haven’t been able to race a lot, so we haven’t unloaded a lot the last few months with all the weather we’ve been having.”
McCreadie claimed his second runner-up finish in as many nights at Magnolia. “We are feeling really comfortable with these cars now. I don’t know what happened in qualifying, if it was really slimy still or what, but it put us behind tonight. We should be starting close to the front and hopefully we can put 100 laps together tomorrow night.”
Moran rallied late by passing several cars over the last half the race to come home in third, despite having an ailing car after the checkers fell. “We stopped down in turn four after coming back on the track. We had some rear end problems after the race. It spun the rear end and pulled the driveshaft out. I will have to get a wrecker to tow it back to the pits. Fortunately, we made all 25 laps tonight.”
The winner’s Lance Landers Motorsports-owned, Longhorn Chassis is powered by a Cornett Racing Engine and sponsored by: Nutrien Ag Solutions, ASC Warranty, Penske Racing Shocks, Valvoline, Mega Plumbing of the Carolinas, Hawkeye Trucks, and Spartan Mowers.
Completing the top ten were Tyler Erb, Josh Richards, Timothy Culp, Earl Pearson Jr., and Neil Baggett.
Lucas Oil Late Model Dirt Series
Race Summary
Friday, May 31, 2019
GEICO Clash at the Mag – presented by Big River Steel
Magnolia Motor Speedway – Columbus, Miss.