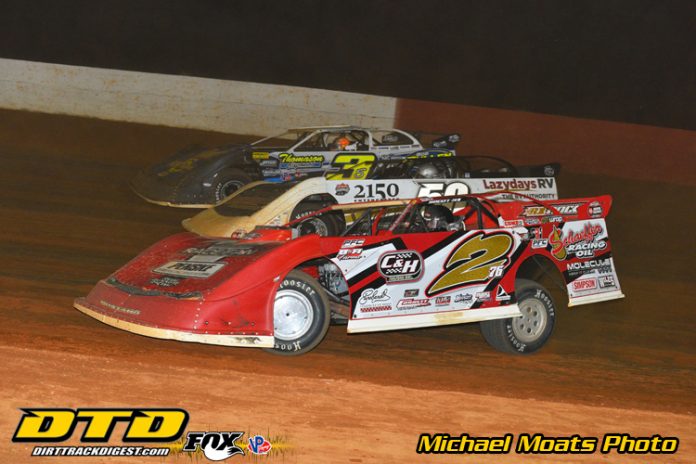 COCHRAN, GA – The first track debut of the season for the World of Outlaws Morton Buildings Late Model Series went very well on Friday night. Warm weather, a great crowd, no threats of rain, a racy track surface… it just all seemed to come together. The same goes for home-state hero Brandon Overton, who picked up his second World of Outlaws win of the year at Cochran Motor Speedway over Chase Junghans and Ricky Weiss.

Overton’s night started out well and ended even better. Laying down a lap of 13.781 placed him third overall in Qualifying, and a win in Drydene Heat #3 set him up for an outside-pole redraw effort. But starting to his inside was a man the Outlaws have seen so many times in that position already this season…

Brandon Sheppard owned the first half of the night’s events, picking up the PFC Brakes Fast Time Award, winning Drydene Heat #1 and redrawing the pole. Early on in the Morton Buildings Feature, it was looking as though Sheppard was going to have his eighth win in 13 races, but Junghans and Overton had other plans.

Sheppard caught the rear of the field on lap 14 with Junghans right on his tail. Junghans, who started behind Overton, had been closing the gap for several laps and drove the car deep into turn one. He stayed with the low line out of turn two while Sheppard hit the cushion, and they both drag raced down the backstretch.

Using the O1 car of Travis Pennington as a pick, Junghans was able to slide under Sheppard for the lead. For the next 14 laps, Junghans held a strong lead, until he caught lapped traffic himself with Overton (who passed Sheppard on lap 18) within a single car length behind.


Overton pulled up alongside Junghans going into turn one and held the bottom line, while Junghans followed Clint Smith on the top. Casey Roberts came out of turn two on the low side but slid up into the middle groove going down the backstretch, which prompted Junghans to try and thread the needle into turn three between Overton and Roberts. His attempt was unsuccessful, and Overton got the best of both cars, holding the low line through the corner to take the lead.

“I knew if I could beat [Junghans] to the brown [part of the track] and just get stuck, I could probably get ahead of him,” Overton said. “It was tight racing but neither one of us wrecked each other. I just got the position and stayed as close to the brown as I could, got a good run and just tried not to overrun the corners after that.”

That move proved to be the one that won the race, as “Big Sexy” led the final 21 laps to pick up the fifth Morton Buildings Feature win of his career.

“I finally feel excited to be back racing,” he said. “Everyone’s getting along really good right now. It just took us a little while to figure out what everybody wanted, what Harold [Holly, Rum Runner Racing crew chief] wants to see. I’m just really happy about the whole deal, it’s finally coming together.”

Indeed, Overton is glad to be back in Victory Lane. He started off the 2019 season with a win at Screven Motor Speedway but fell off a bit in the races that followed, as he posted only one top-10 finish over his next seven starts with the Outlaws. The new partnership between he and car owner Joey Coulter brought about immediate success and new challenges to overcome. And overcome Rum Runner Racing has, as the Schaeffer Racing Oil #2 put on a show Friday night and made quite a statement win.

“It’s taken a lot of lows for us to finally click,” Overton said of the relationship with his new crew chief. “I couldn’t be in a better situation as far as car owners go. Me and Joey get along really good. His parents are awesome, they love racing, and I hope I stay here for a long time.”

This win marks the second in his home state of Georgia with the Outlaws. Overton grew up racing on many tracks similar to Cochran, and he feels that “home field advantage” really played a role in his success over 50 laps.

After Overton made the move for the lead, Junghans was able to hold onto second for his fifth top-five of the season. After starting off 2019 with four top-5s in the first seven races, he did not post another until Friday night. Junghans credits he and the crew’s hard work and resilience to get things right with the setup.

“We’re definitely going in the right direction with our car,” he said. “We’ve been struggling lately. We changed a bunch of stuff the last couple weeks and have been working hard on it, and it’s definitely showing.”

Junghans said he knew the adjustments were working when he saw he was gaining on Sheppard early on.

“[Sheppard’s] car’s been really good this year,” he said. “When we fired and I was keeping up with him, I was thinking ‘oh, we’ve got something now.’”

Lapped traffic seemed to play quite a bit of a role in where the leaders finished this race, as both passes for the lead were made in the middle of it.

“I knew because my crew guy was signaling to me that [Overton] was getting close,” Junghans said. “It was like a hornet’s nest with all of those lapped cars. I would go high and one of them would go high, then I’d go low and another would go low, it was kind of a roadblock for us.”

Headingley, Manitoba’s Ricky Weiss had a strong night inside the top 5, scoring his second straight finish on the podium at a track he had previously not seen.

“Our car’s in one piece, it was a great points night, and they say we were catching [the top two] at the end, so that’s always a plus,” Weiss said.

His move to get around Brandon Sheppard came on lap 35. Another lapped car got in Sheppard’s way and Weiss, who had been chomping at the bit for several laps, was able to throw a slidejob to snag the position. His only regret was that the race went caution-free.

“We had a pretty good battle there,” Weiss said. “I was really hoping for a caution once I got around him just to see what I had for the leaders, but it didn’t pan out that way.”

Next on the Outlaws’ schedule is another debut at a very fast Southeastern half-mile, the Lancaster Motor Speedway in Lancaster, SC. Hot laps begin at 7:30 p.m. ET on DIRTVision, don’t miss what’s sure to be another exciting night of action!