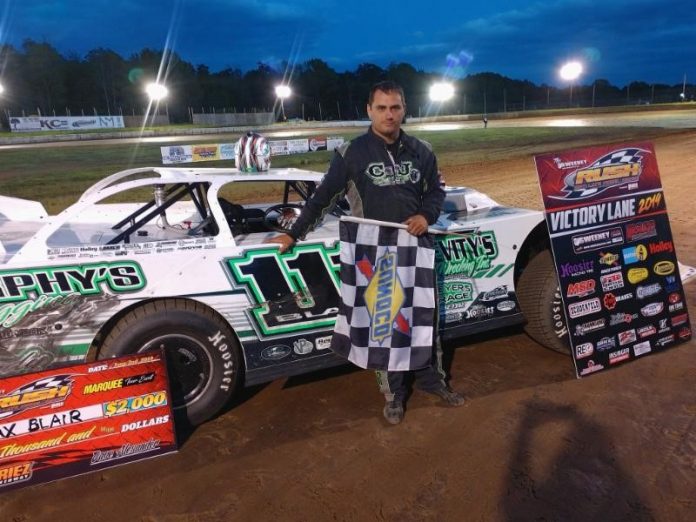 ERIE, PA – The Sweeney Chevrolet Buick GMC RUSH Dirt Late Model Touring Series presented by Pace Performance wrapped up a busy three-race weekend throughout New York and northwest Pennsylvania on Sunday night at Eriez Speedway. Despite a ton of rain that fell Saturday afternoon through early Sunday afternoon, first year track owner, Dave Alexander, and his staff went on with the show and was rewarded with clearing skies yet a chilly late afternoon and evening as just the second show of 2019 was completed at the Erie, Pa. track. It was race #7 of the 2019 season for the Sweeney Tour as a total of 32 different drivers from all over Pennsylvania, Ohio, New York, and Ontario, Canada competed between Sunday and when the show was started and rained out back on May 19.

Max Blair opened up the 2019 Sweeney Tour campaign winning the $4,000 “Raelyn Huffman Memorial” at Delaware International Speedway followed by his first ever win at Georgetown Speedway the following night worth $3,000 part of the “Battle of the Bay” Speedweek presented by Wehrs Machine & Racing Products. On Sunday, Blair returned to victory lane by using a classic crossover move to pass Chub Frank on lap 13 and was never challenged the remainder of the way in the 30-lap feature. Blair’s $2,000 victory snapped defending Sweeney Tour champion and current points leader Jeremy Wonderling’s three-race win streak. Max has now won six of the seven Sweeney RUSH Tour events held at Eriez in the past five seasons with his father Rob winning the other in a substitution role in 2016!

“Most of the memorable stuff I have of Chub is when I was kid,” explained the 29-year-old Centerville, Pa. driver, who also captured the $1,500 Super Late Model victory on Sunday. “Dad was friends with him and we were traveling around racing all over with him. He was one of my heroes growing up. Racing with him is awesome, and any time you can pass him for the win is even better. I was no good in the dash. We changed some stuff and we were definitely better. He’s one of the best. I knew there was no way he was going to let me get under him so I had to catch him by surprise. I couldn’t this without my dad, all of my sponsors, the RUSH Series, my crew, my wife, and Andrew. I have a lot of people that help me and I couldn’t do it without each and every one of them- that’s for sure.”

Fresh off his first career RUSH win on Monday at Stateline Speedway in Sweeney Weekly Series competition, Frank used the outside to pass Breyton Santee on the start for the early lead with Santee, Matt Latta, Blair, and Wonderling in tow. Following a caution for Braeden Dillinger’s spin with two laps completed, Blair moved to third on the restart before five cars tangled the following lap. Right before racing was set to resume, Tour regular, Ryan Frazee, who was making his Eriez debut, exited the event and was designated as the TBM Brakes “Tough Brake of the Night” recipient.


The next 19 laps would go caution-free as back under green, Blair and Santee raced hard for second. The two ran side-by-side on lap five with Blair making the pass around the outside on lap five. As Blair set his sights on Frank, Santee was trying to hold off Latta and Kyle Zimmerman, who had gotten by Wonderling for fifth, in the battle for third. Latta would take the spot as he went to the outside of Santee on lap eight.

Meanwhile, Blair had caught Frank and was all over the veteran standout racer. The two then caught lapped traffic as Frank was doing everything possible to fend off Blair. Finally on lap 13 racing off turn two, Blair performed the class crossover move to sneak under and past Frank racing down the backstretch. Zimmerman continued to move forward as he took fourth from Santee on lap 14.

Blair had a half-straightaway lead on Frank when he caught heavy traffic on lap 15. Blair made some tremendous moves to extend his margin over Frank on lap 16. The event’s final caution was displayed when Kurt Stebbins spun with 22 laps completed. When racing resumed on lap 23, Zimmerman got by Latta for third, while Wonderling passed by Santee and Latta for fourth. Latta though would regain fourth one lap later from Wonderling.

That would be the last of the position changes in the top five as Blair drove off to his all-time leading 24th career Sweeney RUSH Tour victory and third straight at Eriez in his Murphy’s Logging/C&J Dairy/Previty’s Auto Wrecking/Specialty Products/Moody & Son Welding-sponsored #111. Blair also received a Sunoco 5-Gallon Race Jug.

Frank came home in second in his first ever RUSH Tour start driving a Boom Briggs #99B, and earned $1,000. “You’d be surprised but we run this car tighter than we do our open car,” acknowledged the 57-year-old Bear Lake, Pa. “It seems like these tires don’t have as much grip so we’re trying to work on some stuff for our customers. These cars are so much different to drive because you can’t slip and slide them like an open car- you lose too much ground. You have to be careful how you drive them. I have a couple kids that are going to run this car later in the year so we’re just trying to make sure it’s right. The car was a really bouncy tonight compared to Max’s car that was really smooth. We’ll go work on it. Max is tough. I know running second to him isn’t horrible in the crates because he’s the guy to beat about every night. One good thing is I could watch his car to see what it’s doing so I can make our car better.”

Zimmerman’s third place finish was his best in Sweeney Tour competition since finishing runner-up ironically at Eriez on June 7, 2015. Latta, who won Friday’s Sweeney RUSH Weekly Series special at Raceway 7, closed out a great weekend with a fourth place finish. Wonderling was fifth for his fifth straight Tour top five effort of the season. Pole-sitter Santee dropped to sixth in his 2019 Tour debut. Jason Genco went from 12th to seventh and received the “Spoiler Alert” contingency, which was worth a $150 spoiler from Ontime Body & Graphic. Completing the top 10 were Michael Duritsky, Jr., Scott Gurdak, and Kyle Lukon.

The Zarin Truck and Automotive “$500 Club” drawings took place back on May 19 when the event was originally scheduled before being rained out for drivers in the top 15 of Eriez track points. Turn 4 Bar & Grill of Orwell, Ohio co-sponsored the five $100 drawings that went to Kyle Zimmerman, Scott Gurdak, Matt Latta, Breyton Santee, and Paul Norman.

The Sweeney Tour will now be off the following two weekends before the richest Crate Late Model race in the history of the Northeast comes to Lernerville Speedway in Sarver, Pa. June 20-22 for the $10,000 to-win “Bill Emig Memorial” co-presented by Hovis Auto & Truck Supply. Warm-ups and FK Rod Ends “Shock the Clock” Qualifying will take place on Thursday night with the FK Rod Ends heat races and the dash on Friday night, and wrapping up on Saturday night with the last chance B mains, 50-lap $10,000 to-win feature, and the $400 to-win non-qualifier.