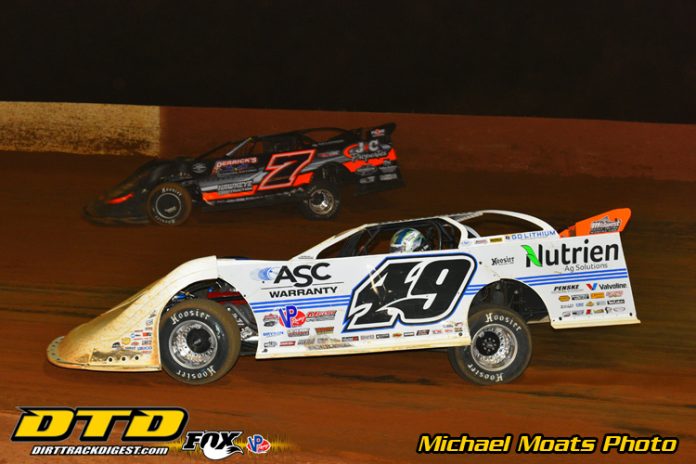 Davenport and Owens ran first and second the entire 50 laps, battling nose-to-tail in the early stages of the race. Hudson O’Neal; the defending race winner; and Josh Richards exchanged the third spot on several occasions in the final laps before O’Neal edged out Richards. Mike Marlar rounded of the top five finishers in a race that went the entire distance without a caution flag.

Davenport earned his second-career Ralph Latham Memorial win and was very pleased in Lucas Oil Victory Lane. “I had a good spot to watch the race last night at Tazewell. I think we had a car that could’ve won last night. We started in the back and I went too hard too early. I thought the rain was right on us. I wasn’t going to give this one away. After they watered the track tonight, I had no idea where to go. I knew Jimmy [Owens] was under me and I wanted to give him some room.”

“I didn’t want to ruin our night right off the bat,” said the two-time and defending National Champion. “I have to thank Josh [King] for giving us a good track to race on. I tore this thing up last night and thanks to my crew guys for putting it back together. We are happy to be back in Victory Lane. I wasn’t making up any time on the lapped cars. I was just spinning my tires there for a while. I was trying to save them until the end. I was trying to keep Jimmy at bay.”


Owens was coming off of a fifth-place finish at Tazewell and hounded Davenport for the entire race. “I didn’t expect it to go caution free. We have a lot of professional drivers out here and everybody did a great job. I was needing some oxygen there about half-way through. I was pounding on that cushion and that just wasn’t for me. It was a rough night at Tazewell last night. The crew busted their tails to get this thing ready for tonight.”

O’Neal charged from eleventh to pick up the third spot. “I wasn’t hoping for a caution I was praying for one. We needed one there. We got behind early tonight. We were pretty good in the heat race. We drove up through there in the feature and I can’t complain a bit, we have had a really good weekend. I know we have wins but we have been missing that consistency. This is a race track we have been waiting all year to come to. I can’t wait to come back here in August.”