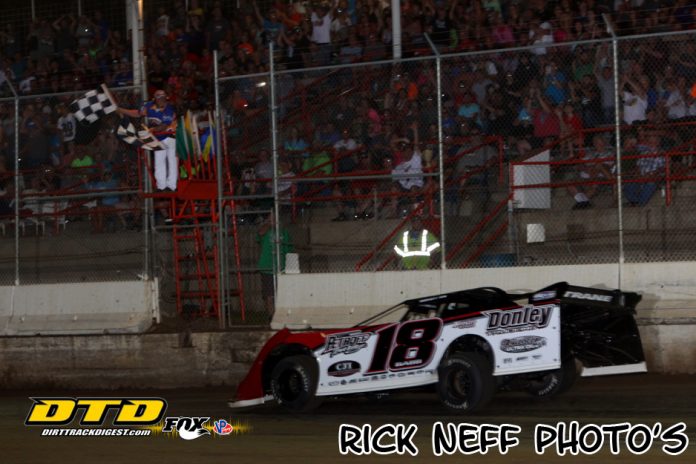 HIGHLAND, IL – Three-hundred sixty-nine days ago, Shannon Babb picked up his 97th career DIRTcar Summer Nationals “Hell Tour” win at the Spoon River Speedway on June 25, 2018. Tonight, as Series Announcer Ruben Mireles declared in Victory Lane, “Babb is Back!” as he emerged victorious for the 98th time in his Summer Nationals career Saturday night at the Highland Speedway.

As Rusty Griffaw led the field around for opening circuits, Brandon Sheppard and Babb started their battle for position – Sheppard hammering the cushion and Babb swiftly maneuvering the bottom.

Sheppard eventually got the best of Babb by the fifth lap and led the next 11 laps, as Moyer continued his charge to the front from his ninth-place starting spot. But the cushion proved to be too much for Sheppard’s right-rear Hoosier tire to handle, and he pulled his #B5 machine into the infield with the flat tire after fading back to seventh by lap 28.

By this point, Moyer had already completed his charge to the front, nearly going four-wide with Schlenk, Bobby Pierce and Sheppard at one point for the runner-up spot. But the young guns of the tour just weren’t able to outdrive the veterans. Babb had taken the lead from Sheppard for good on lap 18 and held it the rest of the way to score his first Hell Tour victory of the season.


The Summer Nationals Late Models are back in action tonight at the Lincoln Speedway in Lincoln, Illinois. Catch all of the action live on DIRTVision!