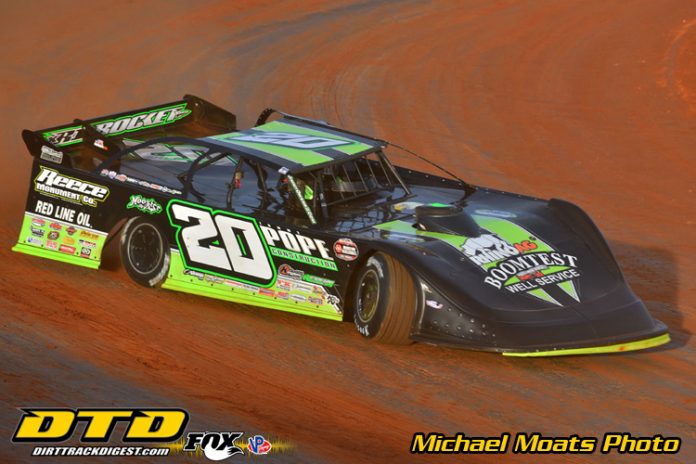 WHEATLAND, MO – Jimmy Owens continues his mastery of Lucas Oil Speedway by capturing the first night of the CMH Diamond Nationals – Presented by Super Clean on Saturday night.
In a race that saw three different leaders, Owens fought off several challenges from Earl Pearson Jr. to secure his second straight Lucas Oil Late Model Dirt Series victory and his fourth-career Diamond Nationals. Saturday night’s $15,000-to-win event marked Owens’ 63rd LOLMDS win.
Scott Bloomquist; the defending CMH Diamond Nationals winner; started from the pole and led the first 10 laps until Owens charged to the lead after starting fifth. Pearson moved by Bloomquist on lap 20 using the top groove and within just a few laps caught the front-running Owens.
Owens and Pearson then dueled side-by-side for several laps as the two went back-and-forth for the top spot. Owens eventually pulled away from Pearson in heavy lapped traffic and he went on the record his ninth career win at Lucas Oil Speedway.
For the second night in a row, Pearson ran second to Owens. Mike Marlar edged out Bloomquist in the waning laps to secure the third spot. Bloomquist was fourth, with current LOLMDS point leader Jonathan Davenport coming home in fifth after starting in 13th.
“We are rolling right now,” Owens said. “This is a big win for us! My car owner Leon Ramirez is here. My crew has worked their tails off in the last week. I didn’t want to see any cautions. We are still struggling on restarts. It’ll be awesome to get to back here tomorrow night and race. The crew is pumped up. It’s a great feeling to get back to victory lane at Lucas Oil Speedway.”
“We couldn’t get off the corner,” commented Pearson. “Everybody knows that Jimmy is so good here. He has won countless times here before. We tried to run with him for 12 to 15 laps. He could move around a lot better than us. We finished second to Jimmy last night and again here tonight. We’ll come back tomorrow night and give it another shot.”
Marlar continued his streak of solid finishes with the LOLMDS by coming home in third. “We changed some stuff on the car before the feature. It was a fun track to race on tonight. We went with something out of the ordinary and it worked. Congrats to Jimmy on the win, he deserves this win. It was good to race against Scott [Bloomquist] again, and it’s good to see him back. He and I battled the whole race.”
The winner’s Leon Ramirez-owned, Rocket Chassis is powered by a Durham Racing Engine and is sponsored by: Rhino Ag, Boomtest Well Service, Reece Monument Company, Tommy Pope Construction, FK Rod Ends, Sunoco Race Fuels, Integra Shocks, Red Line Oil, and Midwest Sheet Metal.
Completing the top ten were Shanon Buckingham, Billy Moyer, Jesse Stovall, Rick Eckert, and Hudson O’Neal.
Lucas Oil Late Model Dirt Series
Race Summary
Saturday, July 13, 2019
CMH Diamond Nationals – Presented by Super Clean
Lucas Oil Speedway – Wheatland, Mo.