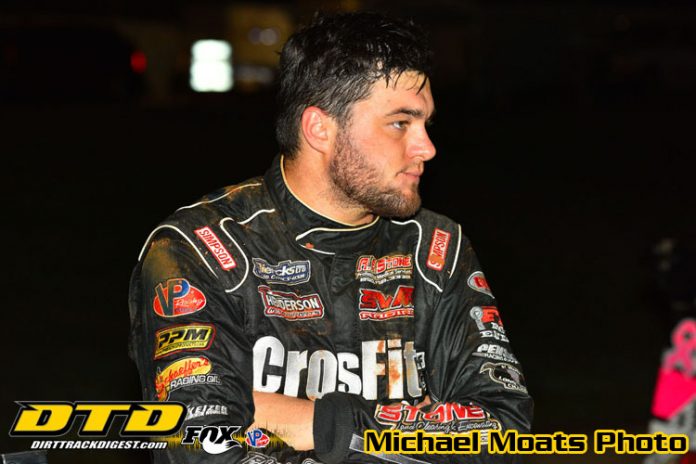 RURAL RETREAT, VA – The Schaeffer’s Oil Southern Nationals Series presented by Sunoco Race Fuels would begin its 2019 season tour on Saturday at Wythe Raceway in Rural Retreat, VA and Brandon Overton of Evans, GA would be dominant in leading all fifty-three laps of the series opener and claiming the $10,000 payday in the process.

Brandon Overton would jump to the early race lead, with Michael Brown, Vic Hill, Dale McDowell, and Ross Bailes giving chase. Overton would set a rapid pace out front and would start working slower traffic on lap seven and he pulled away from the field. McDowell would drive past Hill for third on lap twelve as the action would be slowed by a caution on lap sixteen for Christian Hanger, who had rolled to a stop and second-place running Brown would pull pitside during the caution and be done for the night. The restart would see Overton pull away, while Kyle Strickler would go from seventh to third on the restart and Donald McIntosh would go to fourth on lap seventeen, while Michael Page would mount a charge and take fifth on lap nineteen. Overton would work his magic in traffic at this point and by the time Cla Knight would slow in turn four to draw the caution flag on lap thirty-eight, only nine drivers remained on the lead lap. The restart would see now third-place running McIntosh have a flat right-rear tire and pit and return to action. The final halt to the action would come on lap forty when Michael Page contacted the guardrail in turn one and the end result would be a red flag as Page’s contact would damage a section of guardrail that had to be repaired. The final restart would see Overton maintain the lead over the final laps and secure the win, with McDowell finishing second, while Kyle Hardy claimed the third position. McIntosh and fifteenth-place starting Tanner English completed the top five. The remainder of the top ten would be Dennis Franklin, Jake Knowles, Benji Hicks, Brandon Kinzer, and Anthony Sanders.

The Schaeffer’s Oil Southern Nationals presented by Sunoco Race Fuels next event will be Sunday July 14 at Cherokee Speedway in Gaffney, SC, paying $10,000 to win.