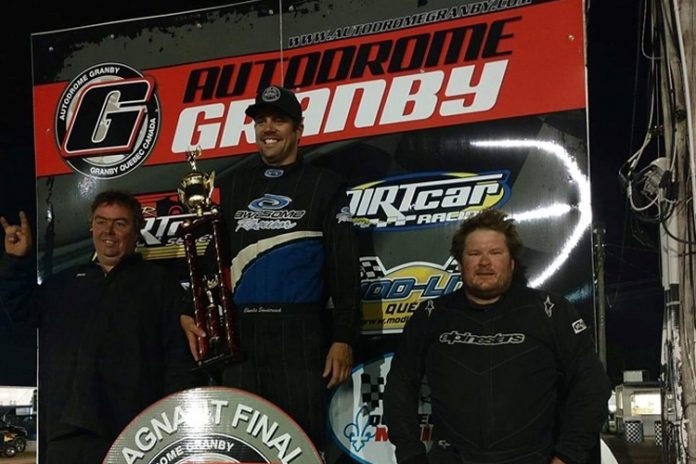 GRANBY, QUE – The Sweeney Chevrolet Buick GMC RUSH Dirt Late Model Touring Series powered by Pace Performance headed to unchartered territory on Friday night in the French-speaking province of Quebec as Autodrome Granby hosted night one of the inaugural “Quebec Invasion”. A big crowd turned out at the fast half-mile track to witness Late Models first for the first time in seven years when the World of Outlaws made an appearance. The Platinum Tour designated event saw all teams travel a minimum of four and half hours to as much as nearly 11 hours for the southwestern Pennsylvania teams.

On May 22, 2017, Canadian Charlie Sandercock finally scored a popular first ever Sweeney RUSH Tour win in his home country at Merrittville Speedway. Since then, Sandercock has been fast and close on several occasions when he’s made limited Tour starts, but was unable to get the job done. On Friday night, Sandercock fell back to fifth on lap 14 before charging back forward and taking the lead from race-long leader Michael Duritsky, Jr. on lap 35 to capture the big $4,000US payday to the delight of his home country fans.

“Thank you to Autodrome Granby for having RUSH up here for these shows,” acknowledged the 32-year-old Trenton, Ontario, Canada racer. “We were really looking forward to this weekend- a big track tonight and down to a small track tomorrow. I can’t thank all these fans enough for coming out watching us. The restart was our friend. We had to make sure we capitalized on that. The track was super-fast. Hats off to the guys that prepped the track- it was really good, and my crew gave me a wicked fast car.”

Duritsky used the outside to pass fellow Pennsylvania racer, Braeden Dillinger, to take the early lead with Dillinger, Sandercock, John Waters, and Steve Baldwin settling into positions two through five. Sandercock was all over Dillinger in the race for second on lap three, while Duritsky began to pull away on lap four. While the battle continued for second, Duritsky had a straightaway lead built up by the time he caught traffic on lap 11. That lead shrunk in a hurry when he got high in turn two on lap 12 not much before Chad Homan slowed to bring out the first caution.


When racing resumed on lap 13, fifth starting Waters overtook Sandercock for third, while seventh starting Kyle Sopaz cracked the top five for the first time. Sopaz was looking strong in his first Tour start as he slipped under Sandercock for fourth on lap 14, but fifth would be as far back as Sandercock dropped as one lap later he regained the fourth position. Sandercock was now on the move as he drove around Waters for third on lap 17 before Waters spun to bring out the caution one lap later trying to fight back under Sandercock.

Back under green on lap 18, Sandercock overtook Dillinger for second and went after Duritsky. Sandercock closed in at the halfway point as the front duo began to distance themselves from the field. Sandercock really began to put the heat on Duritsky on lap 29 and did so before a pair of spins by Chris Fleming and Harry Halliday slowed action with 34 laps completed. Under caution, Dillinger pitted as he yielding third to Sopaz with 11th starting Phil Potts now fourth.

Duritsky again chose the bottom for the restart, but this time Sandercock made the outside work as he shot into the lead with Potts and Sopaz following in second as Duritsky fell back with a tire rubbing after contact from his fierce battle with Sandercock. Sandercock would go unchallenged over the final six laps to take the checkered flag first by a margin of 1.963 seconds in the Paul Crouter-owned, Bellevue Fabricating/Deerhaven Farming & Garden/1000 Island RV-sponsored #57.

Potts had a successful first Tour start since May 23, 2016 at Merrittville as came home in the second spot to earn $2,000 along with the $100 Precise Racing Products “Pedal Down” Hard Charger gift card after starting back in 11th. With Sopaz taking third worth $1,000 in his first career Tour start, Canadian racers were able to sweep the podium.

Waters fought his way back from spinning and restarting on the tail to earn the fourth position. Brandon Mowat raced from 12th to fifth. Duritsky fell back to sixth as he was able to edge out Austin King by 0.052 of a second to earn the Dirt Defender “Defensive Drive of the Night”. Brian Knowles was eighth. Craig Graham advanced from 16th to ninth in his first ever Tour start. Ryan Frazee rounded out the top 10 and received a $150 spoiler kit from Ontime Body & Graphic.