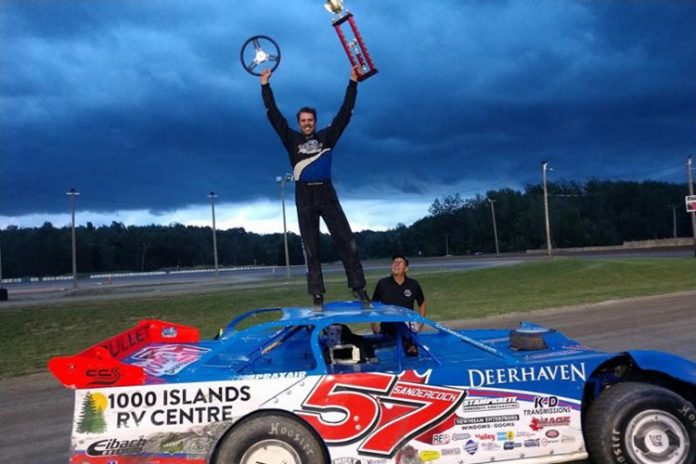 SAINT-MARCEL-DE-RICHELIEU, QUE – The Sweeney Chevrolet Buick GMC RUSH Dirt Late Model Touring Series powered by Pace Performance closed out the inaugural “Quebec Invasion” on Saturday evening with an appearance at Le RPM Speedway. For the second straight night in Quebec, the stands were packed this time at the quarter-mile in not only the first ever RUSH appearance, but the first time Late Models of any sort had competed at the track! RUSH wants to thank the management and staff of both facilities for the wonderful hospitality and professionalism exhibited in addition to putting up the $4,000 to-win, $400 to-start purse each night along with the race teams that all traveled between 5 and 11 hours to compete! Each team received a $100 travel package from RUSH in addition to the prize money and contingencies.

Over two years had passed since Charlie Sandercock won his first career Sweeney RUSH Late Model Touring Series victory back Merrittville Speedway before Friday’s night popular win in front of a huge crowd at Autodrome Granby. Sandercock’s third Tour victory didn’t wait long as the Canadian standout pilot rode the cushion from the seventh starting spot to the lead on lap 17 and never looked back in the 40-lap feature. Sandercock’s impressive weekend sweep of the “Quebec Invasion” earned him $8,125 US, which equates to more than $10,600 Canadian!

“It was a super racey track,” acknowledged the 32-year-old Trenton, Ontario racer. “We did not start off the night the best, but my crew gave me a good car at the end of the night. The fans in Quebec are like no other when it comes to race fans. I really appreciate them having us and hope they enjoyed the racing. Thanks also to the RUSH staff for always going the extra mile for the drivers.”

John Waters jumped into the early lead at the start of the feature with Michael Duritsky, Jr., Austin King, Kyle Sopaz, and Brad Rayner in tow. While most cars were running the bottom, seventh Sandercock moved to the top and passed Brandon Mowat for sixth on lap six and Rayner one lap later to crack the top five. All eyes were on Sandercock as he was riding the rim and quickly making progress. On lap 11, Sandercock drove around Sopaz for fourth. The event’s first caution was displayed when Michael Goudie spun with 15 laps scored.

With Waters choosing the inside for the restart, that gave Sandercock the outside in row two and he certainly used that to his advantage as he passed both King and Duritsky for second on lap 16 as he remained committed to the top. Sandercock then quickly ran down Waters and made the winning pass off the top of turn two on lap 17. Waters stayed with Sandercock, but two laps later pushed across the track and came to rest on the mound of dirt in turn two after the bolt in the lower control arm broke.

Back under green, Sandercock, who only qualified 11th fastest, pulled away from the field, while the battle was on for second as Duritsky had his hands full with Sopaz and eighth starting Phil Potts. Sopaz was able to power around Duritsky off turn four to take second on lap 23, while Potts made the identical move one lap later for third. By now, Sandercock had opened up a straightaway lead before a caution for Craig Graham’s spin with 28 laps scored.

One more caution for another Goudie spin with three laps to go would be all that would slow Sandercock from his third career Sweeney Tour win in the Paul Crouter-owned, Bellevue Fabricating/Deerhaven Farming & Garden/1000 Island RV-sponsored #57 as he took the checkered flag first by 2.054 seconds. Sandercock also received another Sunoco 5-Gallon Race Jug.

One night after a third place finish in his first ever RUSH Tour start, Sopaz did one better coming home second to earn $2,000 and giving him more than $3,000 US earnings for the weekend! For the second straight night, Potts made the podium as his two-race Quebec earnings were also over $3,000. Potts raced from 11th to second on Friday night, and eighth to third on Saturday night. The trio of Canadian racers swept the podium both nights!

Duritsky and Chad Homan had a great battle in the final laps as Duritsky narrowly edged out Homan for fourth by just 0.080 of a second! After breaking the transmission on Friday night that caused a DNF, Homan made repairs and got off to a great start setting second fastest time in qualifying, but his night soured when more mechanical gremlins in his heat race forced him to start 14th in the feature. Homan would battle his way up nine spots to earn the $100 Precise Racing Products “Pedal Down” Hard Charger gift card.

Rayner was sixth. Steve Baldwin barely edged out Brandon Mowat in a long battle for the seventh spot by just 0.082 of a second to receive the Dirt Defender “Defensive Drive of the Night” contingency. Southwestern Pennsylvania racers Braeden Dillinger and Ryan Frazee completed the top 10. Harry Halliday finished 11th and received a $150 spoiler kit from Ontime Body & Graphic. Brian Knowles was certainly looking forward to racing the ¼-mile, but rear end problems forced him to start and park the feature, and was selected as the TBM Brakes “Tough Brake of the Night”.

Waters established a new track record with a lap of 14.385 in $100 FK Rod Ends “Shock the Clock” qualifying then went off to win heat race one for another $25. Sopaz won the $25 FK Rod Ends second heat race, while Waters also won the dash that earned him the feature pole position.

The Sweeney Tour heads to the “Monster Half-Mile” this Saturday night (July 20) for the first of three appearances of the season. It’s the rescheduled “Manufacturers Night” presented by MSD Performance that was rained out on June 29. The Marquee Event will pay $2,000 to-win, $225 to-start with over $30,000 of valuable product giveaways being awarded to competing racers.