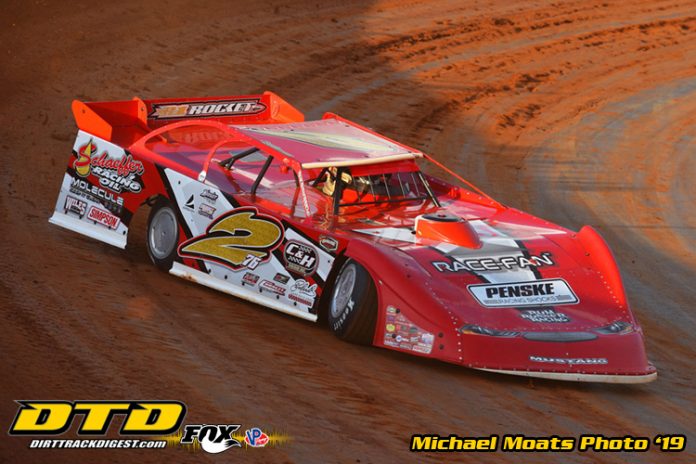 CROSSVILLE, TN – The Schaeffer’s Oil Southern Nationals Series presented by Sunoco Race Fuels would visit Crossville Speedway in Crossville, TN on Thursday evening and Brandon Overton of Evans, GA would take the win worth $3,500. It would be Overton’s third straight win in this event for the tour at this track, having also won the race in 2017 and 2018.

Brandon Overton would take the lead at the start of the event, with Dakotah Knuckles Jason Jameson, Donald McIntosh, and Cory Hedgecock in pursuit. The front five would remain the same as Overton would begin to work slower traffic on lap seven, while Jameson would take second from Knuckles and McIntosh would also pass Knuckles to take third on the same circuit. Overton would pull away a bit at this point, while Hedgecock would begin to pressure Knuckles for fourth. The first caution would wave on lap eleven as disaster would strike Hedgecock as he would spin in turn two while battling for the fourth position with Knuckles. The restart would see Overton and Jameson pull away from the pack a bit, with McIntosh holding third. Michael Chilton would begin to charge at this point and would make his way into the top five on lap fifteen and would take fourth on lap twenty-one.

The second caution of the race would wave on lap twenty-three when Kenny Cobble would roll to a stop on the frontchute. This restart would see Overton and Jameson again pull away a bit from the field, with McIntosh hanging onto to third, while Tanner English would make his way into fifth on lap twenty-eight. Third-place running McIntosh would bring out the final caution of the event on lap twenty-nine with a flat right-rear tire and he would pull to the work area and change the tire and return to action. The final restart would see Overton pull away a bit from Jameson in the final few laps to score the victory, with Jameson settling for second, while Chilton would claim third after starting in the 12th position. English and Jake Knowles would complete the top five. The remainder of the top ten finishers would be David Payne, Tyler Clem, Cla Knight, Walker Arthur, and McIntosh.

The Schaeffer’s Oil Southern Nationals presented by Sunoco Race Fuels next event will be Friday July 26 at 411 Motor Speedway in Seymour, TN, paying $10,000 to win.