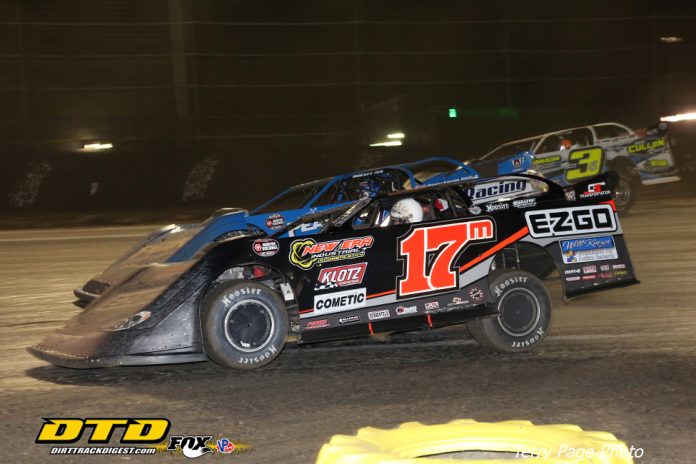 SEYMOUR, TN – The Schaeffer’s Oil Southern Nationals Series presented by Sunoco Race Fuels would visit 411 Motor Speedway in Seymour, TN on Friday evening and Dale McDowell of Chickamauga, GA would lead all fifty-three laps on his way to the victory and the $10,000 payday. McDowell became the sixth different winner in eight series events contested to this point in the season and the race marked the first-ever caution free fifty-three lap event in tour history.

Dale McDowell would take the lead at the start of the fifty-three-lap contest that would run caution-free, with Brandon Overton, Donald McIntosh, Ryan King, and Dakotah Knuckles giving chase. The front-five would remain the same as McDowell would start lapping slower traffic on lap nine and would get into heavy traffic by lap fourteen, allowing Overton to close the distance between himself and McDowell. With the lead duo working in and out of slower traffic, Cory Hedgecock would take fourth from Ryan King on lap twenty-one and three circuits later, Kyle Strickler would claim the fifth position. McDowell and Overton would continue their march through slower traffic up front, while Strickler would score the fourth position away from Hedgecock on lap thirty-one.

Meanwhile, 12th place starter Ross Bailes would slice his way toward the front as he would take the fifth position on lap thirty-three. The final twenty circuits would see McDowell be dogged by Overton for the top spot, with Overton looking under McDowell on several occasions for the lead, but would be unable to make the pass. The final three laps would see Overton continue to challenge McDowell for the lead, however, McDowell would see the checkered flag first, with Overton settling for second, while McIntosh would come home in the third position. Strickler and Bailes would round out the top five finishers. Sixth through tenth positions at the finish would fall to Michael Chilton, Hedgecock, King, Jason Jameson, and Tanner English.