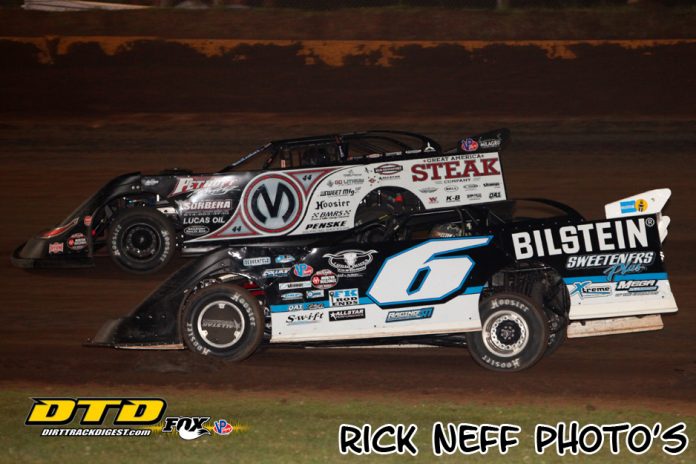 NEW RICHMOND, WI – With six laps remaining in Saturday night’s USA Nationals Feature at Cedar Lake Speedway, it appeared as though defending event winner Brandon Sheppard was going to repeat. But there was one driver behind him who had never been so hungry for his first win in the prestigious event – Chris Madden.

“Smokey” slid his Scott Bloomquist Racing “Team Zero” #0M right up in front of Sheppard’s Rocket Chassis house car in turn two to take the lead, which he held onto through a green-white checkered finish to claim his first USA Nationals title over Tim McCreadie and Brandon Sheppard.

“It’s pretty awesome to come back home,” Madden said. “We drove our first race with Scott back at I-80, had a shot to win that race and wound up second. So, to come here and back it up with a win, it’s pretty awesome. It says a lot for Team Zero.”

That’s right – Saturday night was only Madden’s second event behind the wheel of his Great America Steak Company machine. What an adaptation “Smokey” has made so soon into the seat.

Put simply, Madden had the most consistent car on the racetrack on Saturday night. Never dropping below fourth over 100 laps, he spent the better part of the race’s final quarter battling door-to-door with Sheppard. Madden dominated the bottom lane, while Sheppard preferred the top.


The two played cat-and-mouse until the race’s deciding moment with six laps to go. Sheppard bobbled on the cushion coming out of turn two, allowing Madden to get a run on him down the backstretch. Madden patiently waited for the right moment and pulled the trigger as they came back around into turn one, driving it in deep to slide directly into Sheppard’s line on the top.

“I knew I wasn’t going to catch Sheppard at the pace I was running,” Madden said. “So I just slowed down my pace a bit, got in a rhythm. I said, ‘if I catch him right here, I’ve got to go by him.’”

When Sheppard got to the exit of turn two, the hole had already closed and he was forced to get on the binders, giving up the top spot to Madden. A green-white-checkered finish put a tiny bit on extra pressure on Madden out front, but he got a great restart and persevered to seal the deal.

New to SBR in 2019, Madden and Bloomquist have previous history together. Several years of driving Sweet-Bloomquist Chassis cars under Scott’s tutelage helped foster a relationship that has been rejuvenated at just the right time in 2019. But after Team Zero’s announcement back in March that Bloomquist would be sidelined due to injury, their massive fanbase began to worry about the direction of the operation.

The team eventually found their new pilot in Madden at the beginning of last month, right as he was looking for a new home himself. Madden departed the team he began his World of Outlaws championship campaign with back in mid-June, Skyline Motorsports, and set out on a mission to find a new home at which to hone his craft.

Now, it’s all come together, and SBR has $50,000 and a brand-new wooden eagle trophy to show for it. In Victory Lane, Madden was almost instantly overcome with emotion. $50,000 stands as the biggest payday of his career, and he made every lap count on his way to victory.

“Cody is a great guy. I didn’t really know him that well until I came to do this. But he puts a lot of effort in to this, and he works as hard on these cars as anybody else does in the pit are does,” Madden said.

After all was said and done on Friday night, Sheppard settled for a solid third-place finish, while Watertown, New York’s own Tim McCreadie got by Sheppard on the green-white-checkered restart and drag-raced him to the stripe to claim the runner-up spot. Running inside the top-five nearly the entire race, the K&L Rumley #6M had a great turnaround from last weekend’s non-qualifying PDC effort at Fairbury.

A winner of the World of Outlaws’ first crown jewel race back in June, the Firecracker 100 at Lernerville Speedway, McCreadie knows exactly how tough the competition was in the pits this weekend and was pleased with the efforts by he and the Longhorn Chassis house car team.

“To be up there with [Madden and Sheppard] on the stage is truly amazing,” a grateful McCreadie said after the race. “These guys are some of the best in the business. Just to be a part of it, fighting hard for wins is fun – that’s why we all do it.”

World of Outlaws Rookie of the Year contender Cade Dillard had a very impressive night on track in his very first start at Cedar Lake in a Dirt Late Model, leading the first 60 laps of the race before fading back to a 13th-place finish.

“When you’re out front, you don’t really know where to run it or how hard,” Dillard said. “I was just running what I felt best. I felt like I had I really good car at the beginning… I guess it was too good at the beginning and not good enough at the end.”

Despite not getting the finish he had hoped for, Dillard took a lot away from his experience in a Late Model at Cedar Lake and said it all adds to how much he feels he’s improved over the season.

“I’m still happy to even have the chance to be here,” he said. “More or less, make the race, sit on the pole, and lead the majority of it.”

The World of Outlaws are heading back to the birthplace of the Series, Williams Grove Speedway on Thursday, August 16! Be there as the Outlaws take on the local Pennsylvania field before two more days in The Keystone State, following up at Port Royal Speedway on Saturday and Eriez Speedway on Sunday.