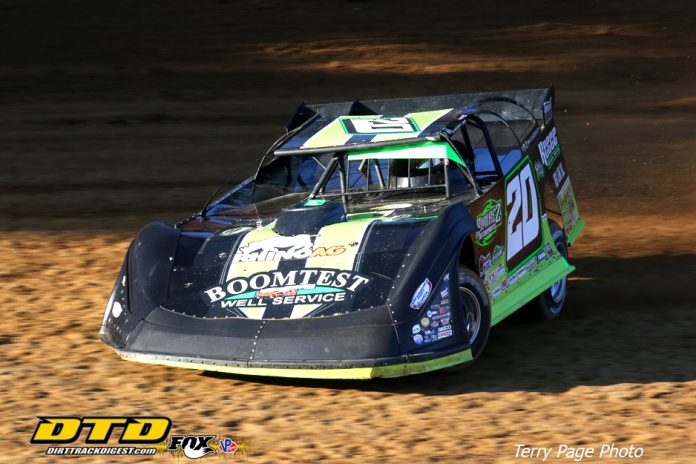 UNION, KY – Friday night’s portion of the Sunoco Race Fuels North/South – Presented by Lucas Oil kicked off with 53 of the nation’s top dirt late model drivers battling in twelve heat races of passing points.
In the first round, heat one was won by Mike Marlar. He led all the way to pick up the victory. Marlar stayed in front of a fantastic battle for second that lasted for the entire distance. Ultimately, he was followed to the line by Michael Norris and Ricky Weiss.
In the second heat, Zak Blackwood led all the way to win. Dale McDowell charged from the fourth starting position to take the runner-up spot. Scott Bloomquist took the third spot.
In heat three, Frank Heckenast Jr. passed Billy Moyer Jr. on the white flag lap to win an exciting battle between the two. Moyer Jr. would cross the line in second over seventh-starting Stormy Scott.
Hudson O’Neal made a daring move early in heat four as the 18-year-old went on to win the heat after starting in eighth, collecting the most passing points in round one with his winning effort. Duane Chamberlain would finish in second followed by Florence first-timer Chris Garnes.
The fifth heat race saw a torrid battle between the top three finishers. Jimmy Owens, Jonathan Davenport and Bobby Pierce ran away from the rest of the field over the last half of the race. Jonathan Davenport, who started seventh and Bobby Pierce, who started eighth rocketed through the field to finish second and third.
The sixth and final heat race of round one saw Kyle Bronson use his outside front-row starting spot to take the win as a hotly contested battle for second took place, with Nick Hoffman finally edging Brandon Overton for the second spot.
In the second round, heat one turned out to have a battle of number 8 cars as Mike Benedum took the lead at the start and stretched it out from the other number 8, Kyle Stickler. Strickler trailed at the line in second position, and eighth-place starter Devin Gilpin finished in third.
The second heat went to outside front row starter Bobby Pierce as he had to contend with youngster Billy Green for the first half of the race. Robby Hensley, the two-time Florence Speedway track champion finished in third.
Earl Pearson Jr. fought off the field for the win in the third heat, followed to the checkers by Ricky Weiss and Jonathan Davenport.
The fourth heat saw Scott Bloomquist come from the seventh starting spot to take the win. Devin Moran edged out Donald McIntosh at the stripe for second.
The fifth heat in round two saw Stormy Scott take the victory over Chris Madden and Tim McCreadie.
The sixth and final heat saw Jimmy Owens advance from the sixth starting position to take the win. With the victory, he earns the pole position for tomorrow night’s Sunoco Race Fuels North-South 100. Zack Dohm came from the same row as Owens to finish in second. Tyler Erb was third.
Lucas Oil Late Model Dirt Series
Race Summary
Friday, August 9, 2019
37th annual Sunoco North/South 100 – Presented by Lucas Oil
Florence Speedway – Union, Ky.