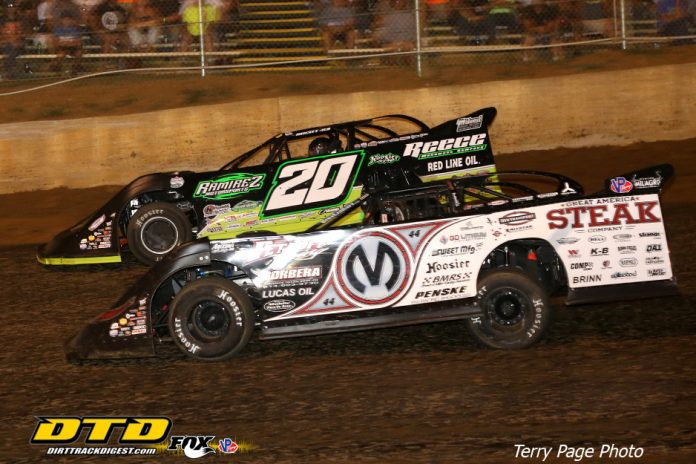 UNION, KY – Chris Madden continued his recent hot-streak with a $50,000 victory in Saturday’s Sunoco Race Fuels North/South 100 – Presented by Lucas Oil at Florence Speedway.
Madden stormed from his tenth starting spot to sweep the weekend in front of the standing room only crowd. With his win, Madden became the seventh different driver to win the race in the last seven years.
Madden took the lead from Jimmy Owens on lap 76 and then went uncontested to score his eleventh career Lucas Oil Late Model Dirt Series victory.
Hudson O’Neal tried to catch Madden in the final four green flag laps, but he had to settle for second with Owens finishing in third. Devin Moran came from the fourteenth starting position to take fourth as Zack Dohm passed seventeen cars to earn the Hard Charger of the Race and rounded out the top five at the stripe.
In a race that saw four lead changes among three drivers, Owens grabbed the lead at the start of the race and led the first eighteen circuits of the 100-lap event. Bobby Pierce then bolted to the point on lap 19. Owens regained the lead on lap 34 and held a comfortable margin for most of the race, until a caution for Bobby Pierce on lap 72.
When the race resumed, Owens and Madden had a side-by-side battle between the two veteran drivers for several laps, until Madden finally managed to take the lead for good on lap 76.
“We knew we had a chance to win tonight,” Madden commented in Victory Lane. “We just wanted to stay out of trouble and position ourselves in the top five by halfway; try to gain some positions on the restarts. At this place, you just kind of inch on a guy, you just really don’t pass him in one try.”
What an awesome racecar and an awesome team we have,” said the winner, who became the 25th different driver to win the event since it began in 1983. “Thanks to all of the fans for coming out this weekend. We appreciate it. Whenever we got into traffic, I knew I had a car capable of winning the race.”
O’Neal recorded his best career finish in the event as he earned a $20,000 payday for second. “We were really good around the bottom all night. We never gave up on it. A couple of times we got shuffled back to fourth or fifth. I tried to search around and find some different angles out there. All-in-all we were good all weekend, we just needed to be one position better in this race. Congrats to Chris, he drove a great race.”
Owens led 60 laps but fell short of becoming the first four-time winner of the event. “It’s really a racy track. You don’t know whether to go high or low or the middle, that’s why it’s a hard race to win. We were comfortable where we were running. The track just had more grip down on the bottom as the race went on and that is where Madden and those guys were running. Both Chris and Hudson have had a great car all weekend. I am happy to come in third behind those guys.”
Madden’s Scott Bloomquist Racing, Bloomquist Race Car is powered by a Custom Race Engine and sponsored by: Great America Steak Company, STEEL-IT, Lucas Oil Products, Sorbera Chiropractic, Sweet Manufacturing, Crossfit by Overton, VP Fuels, and Penske Shocks.
Completing the top ten were Tim McCreadie, Ricky Weiss, Kyle Strickler, Brandon Overton, and Scott Bloomquist.
In the $2,000-to-win non-qualifier’s race, former Florence Speedway track champion Jason Jameson took the lead from Frank Heckenast Jr. after a late race restart and pulled away for the victory. Heckenast finished in second, followed by Robby Hensley, Johnny Scott, and Billy Green.
Lucas Oil Late Model Dirt Series
Race Summary
Friday and Saturday, August 9-10, 2019
37th annual Sunoco North/South 100 – Presented by Lucas Oil
Florence Speedway – Union, Ky.