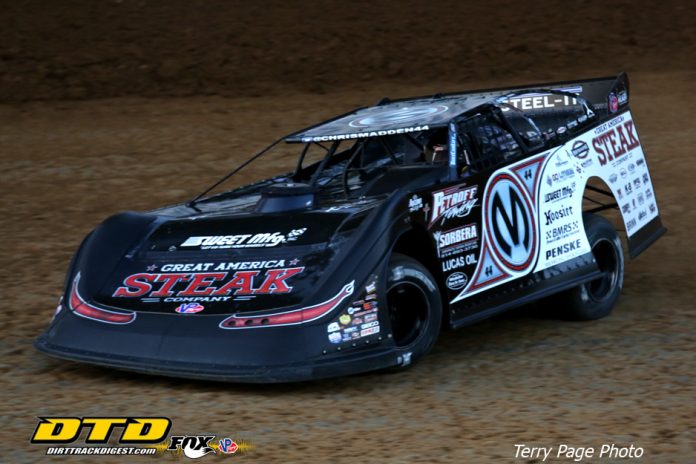 LOCUST GROVE, AR – Chris Madden is undoubtably the hottest driver in dirt late model racing after winning his third consecutive crown jewel event in as many weeks on Saturday night.
The 44-year-old South Carolina native stormed to his first career COMP Cams Topless 100 – Presented by Nutrien Ag Solutions at Batesville Motor Speedway. Madden earned $40,000 for his effort and became the fifteenth different driver to win the annual crown jewel event sanctioned by the Lucas Oil Late Model Dirt Series and the COMP Cams Super Dirt Series.
Madden led the first 33 laps of the race until his Team Zero teammate Scott Bloomquist took over the top spot. Bloomquist, who was seeking his sixth career victory in the August race, led until Madden regained the point on lap 76. From there, Madden held off both Brandon Overton and Bloomquist for the win. Josh Richards finished in fourth, followed by a hard-charging Shannon Babb who took fifth after starting in sixteenth.
Madden and Bloomquist went back-and-forth for the lead several times early in the race after starting on the front row together. Overton would later make his presence known in the fight for the top spot.
Overton, who started tenth on the grid, charged to second just two laps shy of the halfway mark. At halfway, it was Bloomquist, Overton and Madden running in tight quarters. Bloomquist slipped in turn four on lap 76 and allowed Madden to take over the lead for good. Overton never gave up, challenging Madden for the remainder of the race but ultimately settling for a runner-up finish.
The Topless 100 marked Madden’s thirteenth-career Lucas Oil Late Model Dirt Series victory. “We got to heavy traffic with 15 laps to go. I tried to back up off of the traffic. I got by a couple of guys I thought I could and there were ones I didn’t think I could get around so easily. I got off of that bottom there one lap and I could see Brandon was there, so I quickly got back down there.”
“I got back on the bottom just in time,” Madden added. “I tried not to get loose going into the corner and I wanted to set a pace to finish it off. I had no intention of pitting for tires. I took it easy for a long time. Brandon just slipped up enough to give us the advantage. What an awesome race car I have here with Cody Sommer and Scott. I just see big things happening with this team.”
Overton, in the Rum Runner Racing entry, earned $20,000 for his second-place finish. “Chris showed me the top down there and I got beside Scott. Then I slipped a little and Chris got around both of us. Hats off to those guys they have been running really well. Stuff is falling their way. That was a heck of a race out there.   Thanks to Joey Coulter for giving me the chance to drive his car. Thanks to my crew chief Harold Holly, and all of my crew as well.”
Bloomquist who was looking to make it back-to-back wins took the third finishing position and took home $10,000 for his efforts. “We were running the bottom and that was the place to be. We had dropped back to fourth and then we got back by Richards there. If you were outside you were hung out to dry. I felt pretty good tonight. I was a little sore at the end. I had a tough time getting out of the car. We are getting stronger race-by-race.”
The winner’s Scott Bloomquist Racing, Bloomquist Race Cars Chassis is powered by a Custom Race Engine and is sponsored by: Great America Steak Company, STEEL-IT, Lucas Oil Products, Sorbera Chiropractic, Crossfit by Overton, Petroff Towing, Millwood Plumbing, Henderson Amusement, Sweet Manufacturing, VP Fuels and Penske Racing Shocks.
Completing the top ten were Jonathan Davenport, Timothy Culp, Devin Moran, Mike Marlar and Hudson O’Neal.
Lucas Oil Late Model Dirt Series
Race Summary
Saturday, August 17, 2019
27th annual COMP Cams Topless 100 – Presented by Nutrien Ag Solutions
Batesville Motor Speedway – Batesville, Ark.