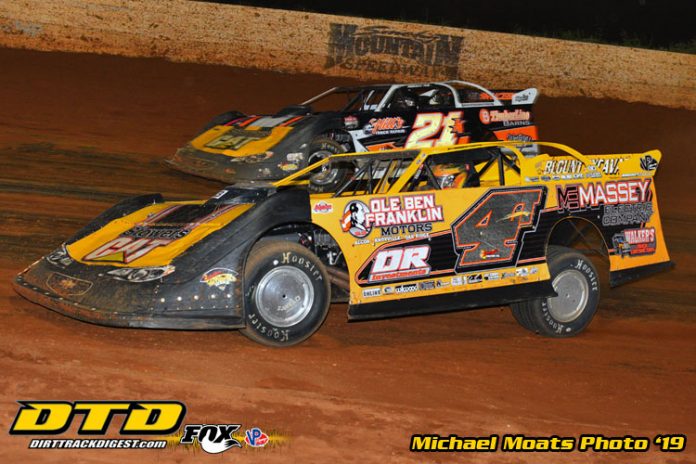 MARYVILLE, TN – The Schaeffer’s Oil Fall Nationals presented by Sunoco Race Fuels would present its inaugural event on Friday evening at Smoky Mountain Speedway in Maryville, TN with $4,000 up for grabs and Tommy Kerr of Maryville, TN would take the lead on lap thirty-one from Brandon Kinzer and lead the rest of the way to claim the victory.

Brandon Kinzer would take the lead at the start of the event, with Dakotah Knuckles, Donald McIntosh, Tommy Kerr, and Robby Moses in pursuit. The front trio of Kinzer, Knuckles, and McIntosh would pull away from Kerr and Moses a bit by lap ten, but Kerr would mount a charge on third-place McIntosh and would take the position on lap seventeen. Three circuits later on lap twenty, Kerr would grab second position away from Knuckles. McIntosh and Moses would close in on Knuckles and the pair would work past Knuckles for the third and fourth positions each on lap twenty-two. With Kinzer still showing the way and Kerr closing the gap between first and second, the only caution of the race would wave on lap twenty-four when third-place McIntosh would spin his machine in turn four after jumping the cushion.

The restart would see Kinzer and Kerr begin to battle for the first position, while David Payne would challenge Knuckles for the fourth spot and snag the position on lap twenty-eight. Kerr would ramp up his challenges of Kinzer for the top spot and would take the race lead exiting turn four on lap thirty-one. Moses would close on Kinzer and take the second position away from Kinzer on lap thirty-three. Moses would mount a charge on Kerr, but would come up short, with Kerr taking the victory, with Moses and Kinzer rounding out the podium positions. Payne and Knuckles would complete the top five finishers. The remainder of the top ten finishers would be McIntosh, Bobby Giffin, Austin Smith, Pierce McCarter, and Kyle Courtney.


The Schaeffer’s Oil Fall Nationals presented by Sunoco Race Fuels next event will be Saturday August 17 at North Georgia Speedway in Chatsworth, GA, paying $10,000 to win.