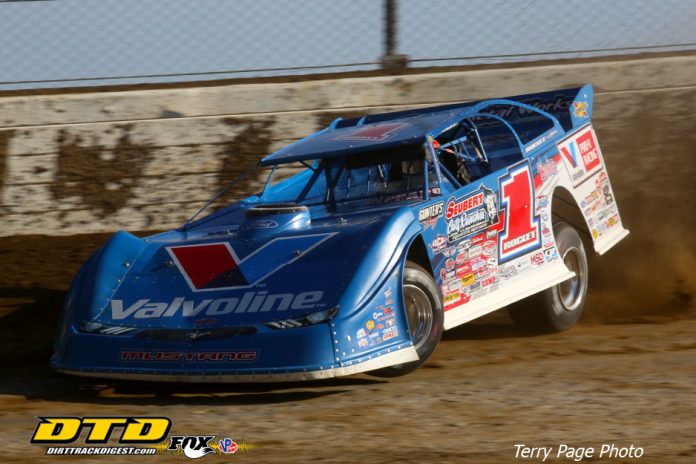 MANSFIELD, OH – Brandon Sheppard and Mike Marlar won Duel feature events on Friday night of the 2nd annual Dirt Million – Presented by Arizona Sport Shirts at Mansfield Motor Speedway.
Each driver earned $10,000 for their 30-lap victories and are guaranteed a starting spot in Saturday night’s Dirt Million finale.
Sheppard took the lead on lap two from pole-sitter Kent Robinson and led the rest of the way to win the first Duel. It was not an easy win for the 26-year-old Illinois racer, as he had to hold off both a charging Jimmy Owens and the defending Dirt Million winner, Earl Pearson Jr. Brandon Overton was fourth, with Hudson O’Neal coming from the fifteenth starting spot to register a fifth-place finish at the checkers.
“It was really hard staying out front,” said Sheppard. “They have got the track really good right now. You had to have a line where the car would go best. With traffic in front of us, we really didn’t know where to go. My crew guys are awesome, they kept me up to date on where I needed to be on the track. It was tricky out there. I felt good around the top of three and four and in one and two I felt good all over.”
“This car is just phenomenal right now. They have it really tuned in. We had a car that was capable of winning last night. It was just a little harder to pass last night,” said the winner, who recorded his 13th career Lucas Oil win and his first since winning the Indiana Icebreaker at Brownstown (IN) Speedway in March.
Owens was in the hunt for the win from the halfway mark and came home in second after passing Pearson on lap 21. “It is hands down better than we ran here last night. It felt good to be battling for the win. Brandon [Sheppard], he is one of the toughest guys in the country right now, and to have him moving around and looking over his shoulder the whole race was pretty awesome.”
Pearson; who collected over $202,000 for his win in the Dirt Million a year ago; returned to the Lucas Oil podium with his third-place finish: “It wasn’t too bad tonight. We got up on the cushion and did our thing, which is unusual for me to go to the cushion. We weren’t bad up on the cushion either. When Brandon moved up there, we couldn’t do much after that.”
The winner’s Mark Richards Racing, Rocket Chassis is powered by a Durham Racing Engine and sponsored by: Valvoline, Seubert Calf Ranches, Ace Metals Works, Gunter’s Honey, Keyser Manufacturing, Sunoco Race Fuels, and Integra Racing Shocks.
Completing the top ten were Kent Robinson, Shannon Babb, Shane Clanton, Max Blair, and Gordy Gundaker.
Marlar claimed his fourth Lucas Oil win of the season, leading all 30-laps for a convincing victory. Chase Junghans; for the second night in a row; recorded a second-place finish. Michael Norris, in the Clint Bowyer Racing #5 entry, posted his best career Lucas Oil Late Model Dirt Series finish rounding out the podium. Jonathan Davenport finished fourth with Tyler Erb crossing the finish line in fifth.
Marlar who also started on the pole of a Thursday night duel was not going to be denied tonight as he stormed to the lead early on over Norris and Junghans. Norris, who like Junghans, was seeking his first career Lucas Oil win, closed on Marlar in heavy traffic with twelve laps scored. Junghans made the pass on Norris for second on lap 20.
Marlar held steady in lapped traffic as Junghans and Norris could not get close enough in the waning laps to challenge for the win. Like Sheppard, the win also marked Marlar’s thirteenth career win with the Lucas Oil Late Model Dirt Series.
Marlar led every lap for his win. “Last night was a bummer when you get a good starting spot like that. It’s tough when you win a heat and get to start up front like we did. The car was something I could deal with today better than last night. It was definitely ‘elbows up’ early. Last year we had a real good shot for the win and a carburetor spring broke I think I was running second when it broke and I had to start lifting on the gas pedal.”
Junghans was pleased with another runner-up finish. “The third times the charm, right? Mikey is hard to beat. I wish the track would have gotten a little wider for us. We still have a little bit of tuning on the car to do yet. But it’s really good right now. We just need to build off of last night and tonight.”
Norris was thrilled with his podium finish. “Just to run with these guys is pretty awesome. The car was really good there. I thought we might actually have a shot at Mikey. The car got a little snug at the end there and that kind of played a factor. Congrats to him. We are glad to have two solid nights here.”
The winner’s Ronnie Delk-owned, Rocket Chassis is powered by a Cornett Racing Engine and sponsored by: Marathon Oil, Mark Martin Timber and Farms, Franklin Enterprises, RS Equipment Sales and Rentals, Integra, VP Fuels, and Delk Equipment Sales.
Completing the top ten were Rick Eckert, Ricky Weiss, Jared Landers, Josh Richards, and Darrell Lanigan.
Lucas Oil Late Model Dirt Series
Race Summary
Friday, August 23, 2019
Mansfield Motor Speedway – Mansfield, Ohio