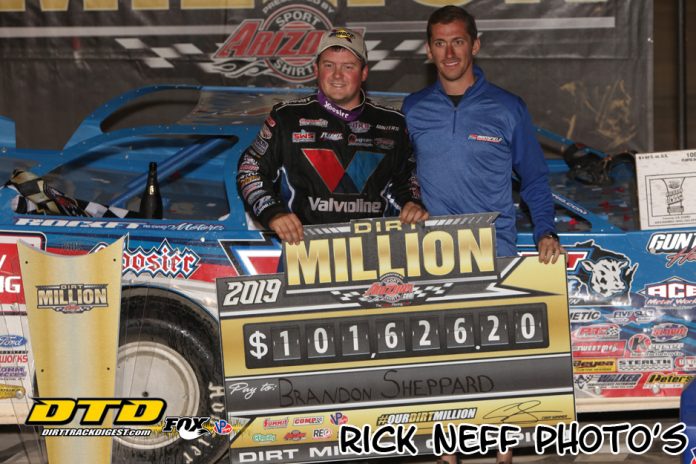 MANSFIELD, OH – Brandon Sheppard took the race lead from Jonathan Davenport on lap 30 and led the rest of the way to win the 2nd annual Dirt Million – Presented by Arizona Sport Shirts on Saturday night at Mansfield Motor Speedway.
Sheppard held off both Mike Marlar and Chase Junghans at the finish line. It was Sheppard’s third Lucas Oil Late Model Dirt Series win of the year and his 22nd triumph in 2019.
Sheppard and his car owner, Mark Richards took home $101,626.20 for his second six-figure victory of the season. He withstood a caution with two laps to go and another on the final lap while fighting off challenges from Marlar and Junghans.
Marlar earned a career-high $50,813.10 payday for finishing second. Junghans also topped his best previous earnings for a race by collecting over $33,000 for third. Jimmy Owens and Ricky Weiss completed the top five finishers.
Davenport took the lead at the start of the race with Sheppard and Scott Bloomquist running in the top three. Junghans slipped by Bloomquist on lap three and joined in the fray. That trio ran nose-to-tail up to lap 14 as traffic started to become a factor.
With the back-to-back cautions on lap 16 and 17, Davenport was unable to pull away from the field. On the lap 18 restart, Junghans moved into second, dropping Sheppard to third. Junghans stayed with Davenport in the race for the lead. On lap 30, Sheppard passed both Davenport and the second place running Junghans to take over the lead of the race.
Sheppard went to Lucas Oil Victory Lane for the 14th time in his career. “This is just amazing! My guys worked so hard on this thing. I put a lot of pressure on myself. I know this car can go to Victory Lane every night as long as I do my part. It was a phenomenal night. I knew I didn’t want to lead early on in that race. I didn’t want to run the top all night, so once I got to the lead, I got back on the bottom. It was a fun race. Thanks to Mark Richards and Steve Baker for giving me this opportunity.”
Marlar tried a couple of times on the topside to pass Sheppard, but ultimately settled on a second-plcae finish. “The whole race, I was just trying to make sure I had enough tires at the end. I was hoping when Brandon got to the traffic that he would get behind one of the cars in the back long enough to hold him up. Brandon is an awesome driver; he doesn’t make many mistakes. He is always fast, and you have to be faster to beat him. My car owner Ronnie Delk is a go for it type of guy and he trusts me with whatever decision I make out there and I think he would have had faith in me to make the best choice.”
Junghans, who entered Saturday with two consecutive runner-up finishes, was looking for his first career Lucas Oil victory. “If I could have gotten around JD [Davenport] earlier or if I had started on the pole it might have been different. The car has been good all weekend I just need to thank my crew for giving me a great car. I am kind of disappointed that we ran third, I felt like we should have won. It’s pretty cool to earn that kind of money for third. I am here to race. I wish I was standing in Victory Lane with the trophy and big check but we will try again next time.”
The winner’s Mark Richards Racing, Rocket Chassis is powered by a Durham Racing Engine and sponsored by: Valvoline, Seubert Calf Ranches, Ace Metal Works, Gunter’s Honey, Integra Racing Shocks, Sunoco Race Fuels, and Keyser Manufacturing.
Completing the top ten were Darrell Lanigan, Jonathan Davenport, Tyler Erb, Hudson O’Neal, and Scott Bloomquist.
Lucas Oil Late Model Dirt Series
Race Summary
Saturday, August 24, 2019
2nd annual Dirt Million – Presented by Arizona Sport Shirts
Mansfield Motor Speedway – Mansfield, Ohio