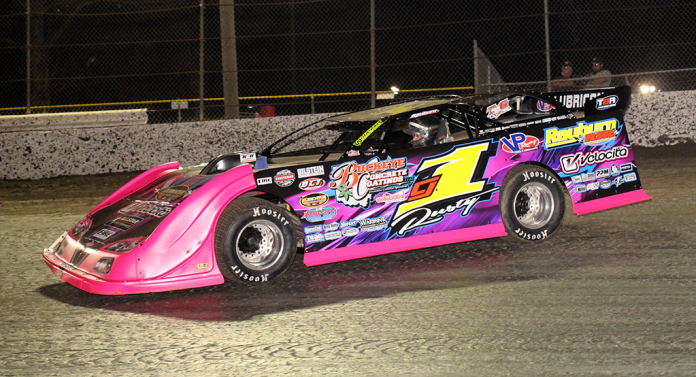 CONCORD, NC – The race for the 2019 World of Outlaws Morton Buildings Late Model Series championship gets down to the nitty-gritty this weekend with the final weekend of racing in the Midwest at I-96 Speedway on Thursday and Sharon Speedway on Friday and Saturday. Only 11 races remain on the schedule, and if any team is going to catch 16-time tour victor Brandon Sheppard by the Can-Am World Finals in just over two months, this weekend will be the time to kick it in gear.

However, the Outlaws will be up against a tough local field over all three days, starting with the I-96 locals. The defending DIRTcar Late Model National Champion Rusty Schlenk will lead the charge into I-96 with his three wins and four top-fives in five starts at the facility so far this year. The McClure, Ohio-native will be making his first World of Outlaws start since his 15th-place finish in the clash vs. the DIRTcar Summer Nationals at Terre Haute Action Track back in late June.

“This is one of the races I’ve been looking forward to all year,” Schlenk said. “I’m definitely excited about the chances we have to win, if not, just run well at least.”

A regular on the 2019 Summer Nationals tour, Schlenk wrapped up a top-five finish in the overall points championship, as well as a fifth-place finish in the tour’s visit to I-96 on July 11.

“We had a chance to win the Summer Nationals race there and just missed a little bit on setup, so as long as we do what we’re supposed to this weekend, we’ll be alright,” he said.

Schlenk recently celebrated his 200th career victory in a Late Model at I-96 on July 26, adding to a list that dates all the way back to July 20, 2002, his 16th birthday, when he won his very first race at Oakshade Raceway in Wauseon, OH. Since then, he’s been a force to be reckoned with at I-96, crediting he and his crew’s know-how of setting their Rayburn Chassis up for driving around the high side.

“I think it’s where we have most of our luck around there,” Schlenk said. “We get our car to go around the top of that place pretty good where everybody else seems to favor the bottom or the middle. It’s kind of hard to keep your speed up on the cushion, it’s so far around up there. But we’ve had a lot of success with it.”

Like many, Schlenk is one driver coming into this weekend on the hunt for their first World of Outlaws victory. With all of his success so far this year at the Lake Odessa oval, this could be his opportunity to score that big-time payday in front of what he considers to be his hometown fans.

“That would be huge,” Schlenk said. “I’ve got a big fan base up there, and I like to consider myself as a local favorite there. If I ever won a World of Outlaws race, I’d definitely want to do it in front of the fans that get to watch me every week.”

Turning attention to Friday and Saturday in Ohio, the brand new “Battle at the Border” event at Sharon marks the return of the World of Outlaws to the 3/8-mile track for the first time since 2010, when three-time Series Champion Darrell Lanigan took the checkered flag as the seventh different winner in seven visits since 2004.

Sharon Speedway sits just west of the Ohio-Pennsylvania border in Hartford, Ohio, making it the perfect location for Ohio and Pennsylvania’s best Dirt Late Model drivers to battle it out for the ultimate bragging rights against the Outlaws in their own game.

The World of Outlaws have had a Pennsylvanian on the full-time roster every year since 2004, and 2019 is none other than Bear Lake, PA veteran Boom Briggs’ turn to carry the flag of the Keystone State into Ohio this weekend, looking for his first Morton Buildings Feature win of the season.

With plenty of previous experience at Sharon, the Battle at the Border will be among his best opportunities to run up front and go for that long-deserved first career World of Outlaws win.

“Sharon is a top-notch racetrack in this area,” he said. “I’ve won a couple of races there and am really looking forward to the weekend.”

Come see Boom, Schlenk and all of the supporting World of Outlaws cast take on Michigan, Ohio and Pennsylvania’s best this weekend at the track or live on DIRTVision!

NEWS AND NOTES
After his $125,000 victory in the Dirt Late Model Dream at Eldora Speedway earlier this season, Brandon Sheppard collected his second six-figure payday of 2019 by winning the 2nd annual Dirt Million at Mansfield Motor Speedway on Saturday night. A hefty $101,626 check headed back to Shinnston, West Virginia on the Rocket1 Racing hauler while a great deal of Outlaws’ best claimed several of the next few spots inside the top ten.

Chase Junghans never finished outside of the top three in any Feature he started all weekend with two runner-up finishes in his preliminary Features on Thursday and Friday night, wrapping things up with a third-place finish in the big show on Saturday and a $33,875 check to go with it. Ricky Weiss and Darrell Lanigan ran steadily inside the top ten all race to claim the fifth and sixth spots, giving four of the top six spots to the Outlaws.

TICKETS
Tickets for both tracks can be purchased at the gate or in advance by logging onto each track’s websites.