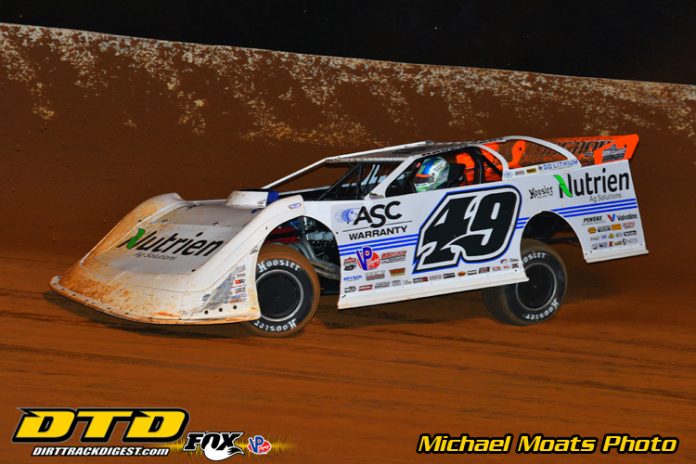 PORTSMOUTH, OH – Jonathan Davenport went to Victory Lane for the twelfth time in 2019 on Saturday night at Portsmouth Raceway Park.
Davenport took the lead at the start of the 50-lap, Bob Miller Memorial, and held off a charging Josh Richards before pulling away for the victory. A torrid battle for second place ensued in the final circuits with several drivers taking a shot at Richards, but the two-time Dirt Track World Champion held them off and finished for the runner-up spot.
Tim McCreadie advanced from his tenth starting spot to finish third. Polesitter Tyler Erb finished in fourth and Jimmy Owens rounded out the top five.
Davenport and Erb bolted away from the pack at the drop of the initial green flag. Richards then caught up to Erb and passed him for second on lap seven.
The third and final caution flew on lap 20 that bunched the field a final time. Davenport held the top spot easily on the restart and pulled out to a comfortable advantage, but Richards started to reel in the leader as the race wore on. Richards cut Davenport’s lead to a car length, but Davenport gained the advantage back as he cleared heavy traffic in a timely manner and continued to pull away in the closing laps.
Davenport the two-time and defending Lucas Oil National Champion was excited with his finish. “I am glad I didn’t see the race behind me. I am out of breath. This was the best driving car I have ever had. We have been struggling here lately. Everybody knows I am not too good here. I didn’t think I knew the directions to Victory Lane here. We are so bad here. We could run anywhere from fifth-tenth and maybe a third would be the best we could do. We changed a bunch of stuff tonight and it paid off.”
“I am tired of chasing these Rocket cars around here,” Davenport added. “That Randall Edwards is so good at setting cars up, especially here with that number 1 car. He’s won the big $100,000 to win race here three years in a row. Our car and all the Longhorns are really running well. I think if McCreadie would have won the heat he would have been tough to beat again tonight.”
Richards who has collected the last two $100,000 paychecks in the DTWC at Portsmouth, gave Davenport a run for his money. “We had a good race there with Tyler [Erb] and everybody else. Everyone raced each other clean. I love coming to this track. I didn’t realize it but at one point I about ripped my spoiler off. We were too free at the end there to take a shot at him [Davenport]. I knew we were holding on at the end and if they got by me, they got by me, but fortunately we held them off.”
McCreadie charged to third at the end and was challenging Richards for the runner-up spot when the race ended. “The track finally slowed down enough for us to keep up. We are just happy for all of our sponsors. I made a mistake in the heat and it cost us, but we kept on swinging and came home with another podium finish.”
The winner’s Lance Landers Motorsports, Longhorn Chassis is powered by a Cornett Racing Engine and sponsored by: Nutrien Ag Solutions, ASC Warranty, Penske Racing Shocks, Valvoline, Mega Plumbing of the Carolinas, Spartan Mowers, and Hawkeye Trucks.
The remainder of the top ten were Steve Casebolt, Kyle Bronson, Chris Ferguson, R.J Conley, and Don O’Neal.
Lucas Oil Late Model Dirt Series
Race Summary
Saturday, August 30, 2019
Bob Miller Memorial – Presented by Pepsi
Portsmouth Raceway Park – Portsmouth, Ohio