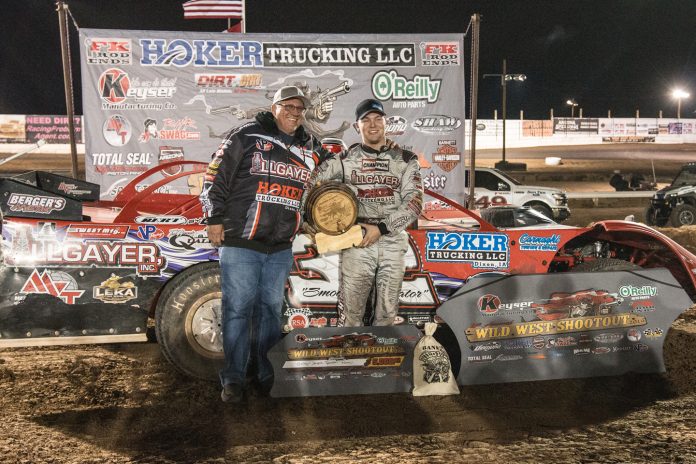 Dixon, Iowa-based Hoker Trucking is back on the lengthy list of sponsors for the 2020 edition of the miniseries, which features six evenings of racing from January 11-19 for the Super Late Model, Modified and X-Modified divisions. The Hoker Trucking logo will be displayed prominently every time a feature winner climbs out of their car after reaching the checkered flag first.

“Events like this are not possible without sponsors like Jeff and Penny Hoker at Hoker Trucking, and I am thrilled to have them back with us in 2020 as a returning sponsor for Victory Lane,” said Wild West Shootout marketing director Jason Babyak. “Jeff is more than just an event sponsor in that he attends the event, interacts with the staff and drivers and is personally involved in the Victory Lane celebrations, so having him back is always a positive for the event.”

“We are very excited to be a part of the Wild West Shootout again for 2020,” said Jeff Hoker. “This is the third year we’ve sponsored Victory Lane and are proud to be a part of this fantastic event. This is a great week of racing that everyone can make into a winter-time vacation while seeing some of the greatest racing action of the year.

“Once again we will have two of our sponsored cars racing there in Chris Simpson and Bobby Pierce and are hopeful one of them can get into the bonus money again this year.”

The Super Late Model portion of the miniseries will once again boast the Keyser Quarter-Million Challenge, a lucrative program that offers a $250,000 bonus for sweeping all six features; $100,000 for winning five; $25,000 for capturing four; and $10,000 for claiming three. With the Wild West Shootout offering five features paying $5,000 to win and a $15,000-to-win finale, a driver able to pull off the feat of sweeping the races would depart Arizona with $290,000.