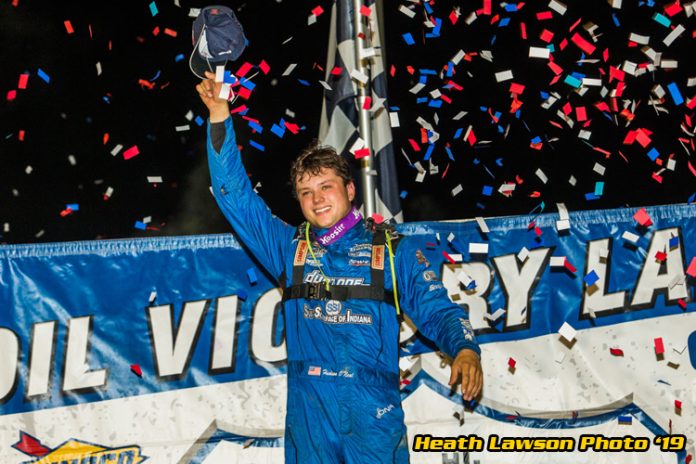 BROWNSTOWN, IN – Hudson O’Neal captured one of the biggest wins of his racing career at his home track on Saturday night. The 19-year-old Indiana native was victorious in the 40th Annual Jackson 100 at the Brownstown Speedway.
O’Neal took the lead on lap 71 from Devin Moran and sped to victory in the Lucas Oil Late Model Dirt Series-sanctioned event before a capacity crowd.
Moran tried to track down O’Neal in the late-going, but O’Neal held him off in the battle of young guns. Don O’Neal, the winner’s father, finished in third followed by Tim McCreadie and Nick Hoffman.
The first 50 laps of Brownstown’s most prestigious race were a battle for the lead between front row starters Mike Marlar and Moran. The two swapped the lead on several occasions in the first half of the race with Moran led at the half-way mark.
Don O’Neal joined in the hunt for the top spot on lap 51 as he swept by Marlar to take second. Don and Hudson O’Neal raced side-by-side for second before Hudson was able to finally clear his dad for the runner-up spot on lap 58.
Both O’Neal’s quickly chased down Moran. Moran was able to hold the point until lap 71 when the younger O’Neal was able to forge ahead. With 29 laps remaining, the running order had Hudson O’Neal in front with Moran, Hoffman, Don O’Neal and McCreadie in the top five.
Hoffman was glued to the bottom of the track. The open wheel modified standout held the third position until lap 86 when both Don O’Neal and McCreadie slipped by him.
In the late stages of the race, both Moran and Don O’Neal were closing the gap on the former Lucas Oil Rookie-of-the-Year, but the youngster was able to keep them at bay for the first Jackson 100 victory of his career.
It was a popular win for Hudson O’Neal as he went to Lucas Oil Victory Lane for the fourth time in 2019. “I am speechless right now. I was counting down the laps for the last ten laps. That’s amazing and to do it here on my home track. This is where I grew up racing and I love it every time I can come back here to race and perform in front of these wonderful fans. They have supported me for so long and from the beginning and they have helped me get where I am today.”
Moran, who finished second in the Indiana Icebreaker in March, was close to getting the first Brownstown win of his career. “That was a tough one to lose. Congrats to Hud on the win. Don was there too. Our car couldn’t steer as well as theirs. I was hoping he [Hudson O’Neal] would move up. I think I could have had a shot at him in the last few laps.”
Don O’Neal, giving his son a bear hug in Victory Lane, came up just short of his fifth-career Jackson 100. “I was wanting to get to the lead. Man, what a racetrack. It was a heck of show from the start. It was a lot fun. I just love coming to this track. This place is awesome. This place has a lot of memories for me.”
The winner’s Todd and Vickie Burns, SSI Motorsports-owned Longhorn Chassis is powered by a Clements Racing Engine and sponsored by: Dyno One, West Side Tractor Sales, Sub-Surface of Indiana, Tarpy Trucking, VP Fuels, Penske Shocks, Swift Springs, Crawford Outdoor and O’Neal Salvage and Recycling.
Completing the top ten were Tyler Erb, Shanon Buckingham, Chris Madden, Josh Richards and Mike Marlar.
Lucas Oil Late Model Dirt Series
Race Summary
Saturday, September 21, 2019
40th Annual Jackson 100
Brownstown Speedway – Brownstown, Ind.