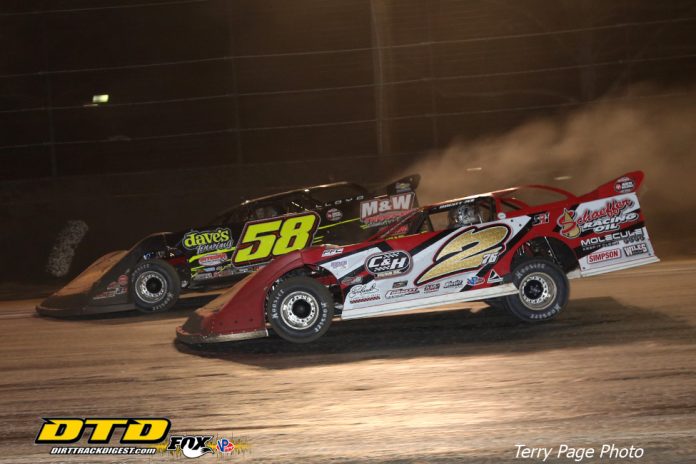 This weekend, when the Outlaws take on another Thursday-Friday-Saturday tripleheader at Lavonia Speedway, Cherokee Speedway and 411 Motor Speedway, there will be another driver by the name of Brandon in the field who has defeated the Outlaws twice already this season and will, no doubt, be a big contender to do it again. Commonly referred to by his nickname of “Big Sexy,” it’s the 2015 World of Outlaws Rookie of the Year, Brandon Overton.

The Evans, GA-driver slayed the Outlaws in the season opener back in February at Screven Motor Speedway and again in late May at Cochran Motor Speedway; two tracks in his home state that he certainly knows his way around. Armed with several Super Late Model wins around the Southeast and a Schaeffer’s Southern Nationals Series championship title, Overton has definitely shown what he’s capable of in his first year behind the Rum Runner Racing #2.

Those new trophies on the shelf look great to everyone involved in the shop, but Overton’s competitive spirit keeps driving him forward every week to make it to Victory Lane every time he’s on the track. In short, he can never have too much success.

“I feel like we’ve accomplished what we set out to do,” Overton said. “But I also feel like we could have done better. I think when I first joined the team, we all had really high expectations. We haven’t done bad, it’s just that we set the bar so high for what we thought we were going to do this year that we’re now still urgently searching every week to win more races.”

Team owner and former full-time World of Outlaws wheelman Joey Coulter brought Overton onto the team over the winter of 2018-19, where they had almost immediate success with the expertise of crew chief Harold Holly – a personal friend of Overton and former crew chief of Coulter in his NASCAR Camping World Truck Series days.

The trio has spent lots of time at the track and in the shop working on both their cars and communication skills throughout the season, which Overton and Coulter agree has helped the development of their team immensely.

“Sometimes, Joey helps Harold understand what I’m saying because they’ve been together for so long,” Overton said. “I can tell Joey something and then he’ll explain it to Harold a bit better than I can.”

Overton and Holley’s friendship has remained the same, but the way they interact in the pit area has not. Overton said he’s had to make efforts throughout the season to work more professionally with his crew chief.

“Harold and I, we’ve been friends since I was about 13 years old,” Overton said. “He’s my crew chief but he’s been my friend for so long. Now he’s got a role to play with being my crew chief so it’s definitely different. I have to learn how to work differently with him than I used to.”

Coulter hasn’t forgotten the days of his time as an Outlaw in 2016 with Holley’s tutelage beside him. The things the two had become accustomed to while a part of NASCAR carried over into the new Super Late Model team, which Overton eventually had to get familiar with himself.

“They’ve both raced at much higher level than I have,” Overton said. “I’ve never been a part of a team that operates like a NASCAR team does. They do things a lot different than I’m used to seeing, and that takes a little bit of time to get used to.”

At the end of the day, Coulter knows he made the right decision by putting Overton in the seat this year. He’s proud of the team he’s built since stepping out of the driver’s seat full-time and has nothing but positive aspirations for the road ahead. The consistency the team has shown over the past several months, he said, has been the biggest benchmark of success so far this year.

“Obviously, you can’t win every race. But when you can at least give yourself a chance to, night-after-night, from a car owner’s perspective, that gets everybody excited because it shows the strength and potential that your program has,” Coulter said.

With an eye toward the tracks ahead this weekend, both the driver and owner are confident in the team’s abilities to put it in Victory Lane at least once. Overton’s runner-up finish in the Southern Nationals event at 411 Motor Speedway back in late July showed just how close he could come to picking up a win at the Tennessee oval. But now, playtime’s over. He’s back with vengeance for a $10,000 check he just missed by one spot.

“I’ve actually gotten a little better at 411 the last few times I’ve raced there, so this is a good weekend to try and get another win,” Overton said.

“I think we’ve got a lot of good notes from running down there earlier this year, especially at 411,” Coulter added. “At this point, that place owes him a win. He’s been really close there the last few times and had some really strong runs. Obviously, he’s got a lot of great history at Cherokee. Lavonia might be the wildcard, but I know he’s been there before.”

Come see Overton and the entire Southeastern Super Late Model posse take on Sheppard and the rest of the Outlaws this weekend in the final three races before the Can-Am World Finals at The Dirt Track at Charlotte in November!

Tickets for all tracks can be purchased at the gate on race day. Prices listed below. 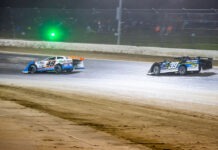