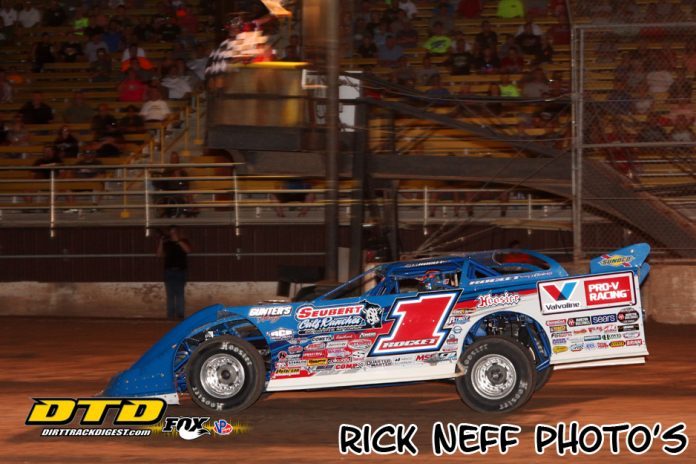 The 13th annual Can-Am World Finals at The Dirt Track at Charlotte Motor Speedway will cap off this spectacular season of racing for the World of Outlaws Morton Buildings Late Models on Nov. 7-9, alongside the World of Outlaws NOS Energy Drink Sprint Cars and Super DIRTcar Series.

The event kicks off with Hot Laps and Qualifying sessions on Thursday night for Sprint Cars and Late Models, accompanied by Heat races for the Big-Block Modifieds. Two full shows on Friday and Saturday for all three divisions will complete the event before the ceremonial championship presentations wrap-up at the finale on Saturday night. Following Saturday’s racetrack festivities, the off-track celebrations continue with the annual World of Outlaws banquet at Concord’s Great Wolf Lodge, where all will be streamed live on DIRTVision.com.

Lots of exciting new storylines will follow the Late Models into the final weekend of the season, and above all will be the coronation of current points leader Brandon Sheppard and the second World of Outlaws championship of his career under team owner Mark Richards.

For Rocket1 Racing, this year has been a domination of the World of Outlaws tour. In terms of consistency, they’ve again set a new bar for repeated long-term success across a national Dirt Late Model circuit. They have posted 36 consecutive top-five finishes, finishing outside the top 10 only once all season. It’s simply remarkable.

And then there’s the very crowded win column — a record-tying 18 wins in 39 races and a chance for World of Outlaws history at The Dirt Track at Charlotte. Two more chances, to be exact, on a track he’s where he’s won three times. With the usual huge car count and tough competition at the Can-Am World Finals, Sheppard will have his hands full to earn what has now become a bit of an elusive 19th win of the season.

Sheppard’s last six World of Outlaws starts have all been top-five finishes, but no trips to Victory Lane, making it the longest stretch of his season without a win. But, if history at The Dirt Track serves as any indication, the Rocket1 team should have hope to get the job done at least once over the weekend.

Last year’s edition of the Can-Am World Finals brought much different storylines into play. Chris Madden trailed eventual champion Mike Marlar by just 22 points heading into Friday’s portion of the event on Saturday afternoon before suffering a broken oil line on lap six of the Feature, taking him out of the championship equation.

Meanwhile, Sheppard picked up the win after a back-and-forth battle with Tim McCreadie in the closing laps, setting him 34 points back of Marlar in the championship standings with just one race remaining.

Saturday’s Feature again went well for “The Rocket Shepp,” as he collected a solid third-place finish after 50 laps around the 4/10-mile. However, Marlar did just what he needed to stay within sight of Sheppard and the championship points battle, finishing sixth in the race and earning the crowning achievement of his career, a World of Outlaws championship title.

Fast forward to this year, and the scenario is entirely different. Sheppard has built a whopping 320-point lead ahead of second-running Chase Junghans, leaving Sheppard and his crew to focus on winning their 19th race rather than holding off somebody for the championship. This will be the sixth World of Outlaws title in 18 seasons for team owner Mark Richards, the third in the past four years with two different drivers.

That other driver has a lot in common with Sheppard. Mark’s son, Josh Richards, shares the 18-win season record with Sheppard that they each established; Richards in 2016, Sheppard in 2017. Both of those seasons were also highlighted with a very large points gap heading into the final race weekend. 2019’s conclusion will be, no doubt, a return-to-form for the Rocket1 crew.

Whether or not Sheppard eclipses the 18-win record at Charlotte, Series history will still be made. Ricky Weiss has also officially earned a great honor of his own, and has a chance for a unique superlative as well.

With his 16 top-fives and 29 top-10s over 39 starts, Weiss has officially clinched the 2019 World of Outlaws Rookie of the Year title, becoming the first Canadian-born driver to win the honor. The Headingley, Manitoba-native also held the runner-up spot in the overall points standings for quite a stretch of time over the summer, but now finds himself in fifth, 32 points out of second place after a couple DNFs in his past six starts.

Should the “Manitoba Missile” overcome his misfortunes and reclaim at least third place in the overall standings before the final checkered flag falls on Nov. 9, he’ll also become the highest-finishing Rookie in Series history. Devin Moran, the 2017 Rookie of the Year, is the current owner of that record after a fourth-place points result just three seasons ago.

Even though the Series Champion and Rookie of the Year have been decided, a battle for second place in the overall standings has heated up in the past three races and will come to a full boil at The Dirt Track. Spots two-through-five are separated by just 32 points, and it’s anybody’s race for a $60,000 points fund check – a $30,000 difference between second and fifth. Expect Junghans, Darrell Lanigan, Shane Clanton and Weiss all to be in tip-top shape and at each other’s throats in less than three weeks’ time.

Tickets for the Can-Am World Finals at The Dirt Track at Charlotte Motor Speedway can be purchased in advance online at worldofoutlawsworldfinals.com or at the track on any race day. Three-day spectator ticket packages, pit passes and various camping spots are all on sale now. Single-day spectator tickets go on sale online on Oct. 28. Tickets can also be purchased over the phone by calling 1-800-455-FANS (3267).

As always, fans can also watch every lap of World of Outlaws action live on DIRTVision.com with a Late Model Fast Pass subscription, only $39 per month.