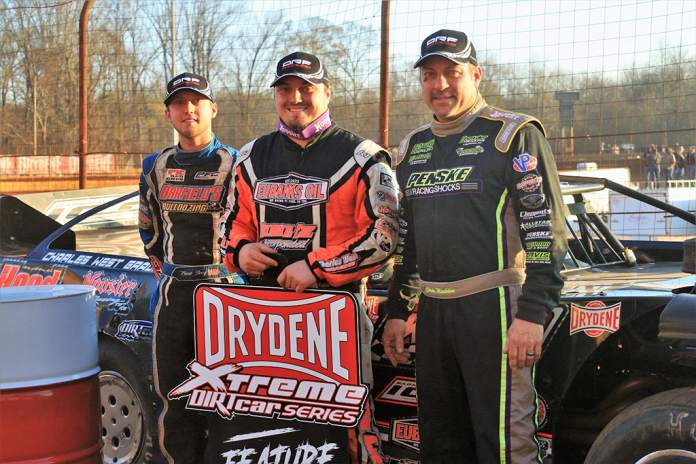 “It means a lot, going into the, quote-unquote, offseason,” Mitchell said. “We’re going to regroup, enjoy the holidays, spend some time with family and all. We really appreciate DIRTcar and Drydene putting this deal on and giving us something to do this winter, that way we wouldn’t be at the house twiddling our thumbs.”

As one of nine drivers with perfect attendance through the first half of the 2019-20 Xtreme campaign, Mitchell has taken full advantage of the opportunities the new series has presented to him, and it paid off big-time in just his third try at Xtreme DIRTcar Victory Lane.

Sunday’s preliminary events went quite smoothly for the Enoree, SC-native as he set fast time in Qualifying, won his Heat race and redrew the pole, making it a perfect clean sweep of the afternoon with his 40 Feature laps led. But it didn’t come easy, even with the front-row starting spot.


“It all started off with drawing the one in the redraw, that really had a lot a lot to do with it,” Mitchell said. “I’m not saying we wouldn’t have won had we drawn a three or a four; we had a good car.”

The competition Mitchell held off was fierce and included the likes of Madden, Logan Roberson, Kyle Strickler, Trent Ivey and G.R. Smith. On the very first lap, Roberson actually pulled up beside Mitchell to challenge for the lead but was unsuccessful as Mitchell shut the door in between turns three and four. This remained the only serious challenge made for the lead, but Mitchell dealt with the pressure of several restarts over 40 laps, which made him work for it.

“I knew those guys were behind me, and I knew if I slipped the wheel too much, they were going to get [under] me,” Mitchell said. “I felt like a gazelle being chased by a pack of lions. You can’t slip a wheel against any of those guys. Lady luck was on our side tonight and we capitalized on it.”

Most leaders don’t like seeing the caution flag start flying late in the race, but Mitchell said he actually benefitted from them because of his tire compound choice.

“We went a little bit softer than everybody else did on tires,” Mitchell continued. “Those cautions, they were helping us a lot, helping get that thing cooled back off.”

The drivers were met with beautiful weather for Dec. 15. Low-mid 60s temperatures and sunny skies during the day made it ideal weather for the fans, but gave drivers a fit or two at various points in the race with the sun beginning to set over Turn 2. But, everyone races on the same track, and Mitchell just seemed to handle it the best.

“The sun glare, it was in the right spot in the middle of [turns] three and four, almost at the apex of the corner where it really wasn’t playing that big of a factor, but it was still right there. I figured it would change the racetrack a little more than it did. They had a great racetrack,” Mitchell said.

A big stretch of green flag laps early on meant a bit of lapped traffic for the leader to navigate through, which he did perfectly, keeping a good distance between he and second place.

“I was having to slide my car a little bit more than I wanted to in traffic,” Mitchell said. “I felt really confident out there when I was running my own race. I really wasn’t expecting anybody to go around me on the outside, I just made sure I kept it around the bottom and kept the car straight.”

Overall, just a perfect day for the Southeastern Super Late Model favorite. He now looks to build on this momentum after the holidays, picking it back up on Jan. 18 at a place he’s all too familiar with – Cherokee Speedway in Gaffney, SC.

Another fellow South Carolina native, former Crate Late Model racer Trent Ivey, drove a great race to grab second from Smith on a lap 15 restart, which he held through the remaining 25 laps to pick up his first top-five of the Series.

“We’ve run like absolute crap the past two or three months, so this is huge for us,” Ivey said.

Bouncing back from a 20th-place result last weekend at Volunteer Speedway, a podium finish in Ivey’s Super Late Model was just what he needed to restore confidence. But he did struggle with the sun glare getting into Turn 1 as well, which made things difficult, despite his excellent restarts.

“The sun was in a terrible spot too, I couldn’t see anything going into [turn] one, Ivey said. “Luckily, things just went our way. I was able to slip by people on the restarts, they weren’t paying attention, I guess.”

For the third race in-a-row, Madden has scored a podium finish with the Xtreme Series, padding his points lead just a bit more as he now leads Ivey by 15.

Madden came from the fifth spot and challenged for the podium all race long but had a tough time cracking into it as Roberson refused to lay over for the Scott Bloomquist Racing driver.

Their battle culminated with a bit of contact going down the backstretch on lap 35 as Madden was trying to get around Roberson on the outside. Roberson switched to the top side heading into turn three and the contact forced Madden to the inside, where the two drag-raced out of Turn 4 and into Turn 1, Roberson still with the spot.

Roberson had a rough corner exit and eventually gave up the final podium spot to Madden, but the two showed that they weren’t about to back down from a good challenge. And Madden took notice.

“No big deal, the redraw put us back there anyway. Hats off to all the guys that get this thing ready and bring it to the racetrack for me to drive, we appreciate that, putting the hard work into it,” Madden said.

Earlier this week unveiling his new car and team sponsorship with Drydene for the 2020 season at the PRI tradeshow in Indianapolis, Madden said he and the team are more excited now than ever to get the new season underway with the World of Outlaws Morton Buildings Late Model Series and look to cap off the Xtreme Series season with a $20,000 championship check at the season finale on Feb. 29 at Modoc Raceway.

“Drydene oils, greases and lubricants – we appreciate [President] Dave [Klinger] and his guys coming aboard this year, it’s gonna be an awesome year for us,” Madden said.

This wraps up the 2019 portion of the inaugural Drydene Xtreme DIRTcar Series season; race 4/6 hits the track on Jan. 18 at Cherokee Speedway in Gaffney, SC. If you can’t be at the track, be sure to grab yourself a DIRTVision Fast Pass subscription to watch every lap live from the comfort of your home this winter and witness how the second half of the season plays out!