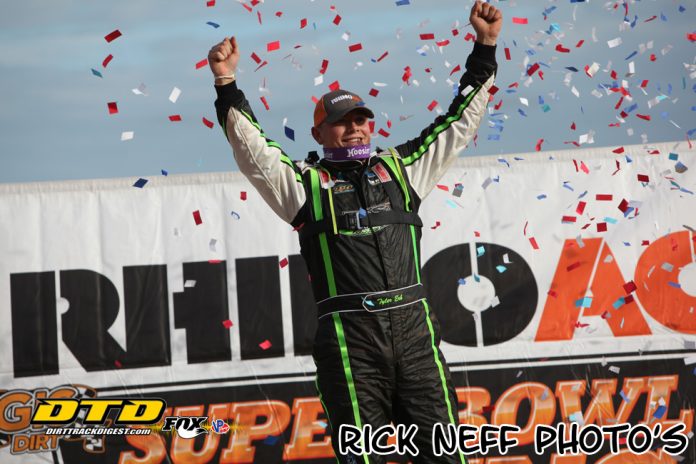 BATAVIA, OH – Tyler Erb started off the 2019 season by winning the first night out and taking the honor of displaying the Midwest Sheet Metal orange spoiler to signify the points lead. Erb finished out the year as the Lucas Oil Late Model Dirt Series Eibach Springs Rookie of the Year and taking fourth in Championship points.

“I’m super happy to be able to win Rookie of the Year for Best Performance Motorsports. We had a goal to win that, and to set and achieve a goal is something people always talk about, but not everyone can say they did,” Erb stated. “Our season started out so well that people said we hit a slump halfway through the year, but we really weren’t. It’s not easy to win every night, especially racing the champions that we do. Next year we plan to be named Champion and are going to be full speed ahead towards achieving that goal.”

At the year-end awards banquet, Erb received $10,000 in cash and other prizes for Rookie of the Year honors. Erb went on to say, “I’d like to thank Eric and Kelly Brock, Jeff and Kelly Babcock, and everyone that works for Best Performance, as they all play a role in our season. I would also like to thank Rocket Chassis, Durham Racing Engine, Industrial Resourcing Group, Roberts Bee Company, New Point Lighting and Design, Bazell Race Fuels, Sunoco, Franklin Enterprises, Valvoline, Keyser, and KBC Graphix.”