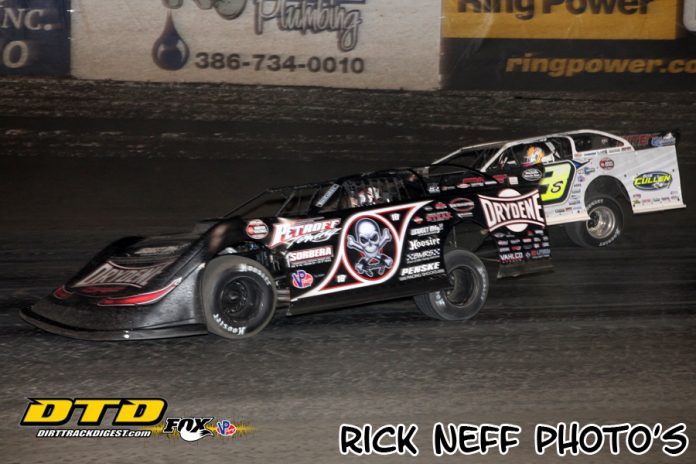 BOONE, IA – March 10, 2020 – The “Hawkeye 100” at Boone Speedway is the newest and one of the biggest events this year in dirt track racing. Champions and legends like Brandon Sheppard, Scott Bloomquist, Darrell Lanigan, Chris Madden and the World of Outlaws Morton Buildings Late Model Series will battle May 1-2 at historic Boone for $30,000-to-win, with tickets and camping on sale now.

This new two-day extravaganza includes 3 preliminary “Triple Hawk” $2,500-to-win features on Friday with the 100-lap Hawkeye 100, $30,000-to-win, $1,000-to-start main event on Saturday. Plus, in a nod to the tradition of Boone’s most legendary event, the Hawkeye 100 will include an unprecedented three-wide start to Saturday night’s Feature.

The starting field for the Hawkeye 100 finale on Saturday night will line up three-abreast and take the green flag side-by-side-by-side for the first time in World of Outlaws history.

Hawkeye 100 co-promoter Cody Sommer has been working hard with track and Series officials to create this unique event at Iowa’s Action Track, and he couldn’t be more proud to be associated with everyone involved.
“To have the opportunity to be involved at an event at Boone in any fashion is a privilege and an honor,” Sommer said. “Boone has such great history, very well known for the raciness, the track prep and the facility. Boone has never seen anything like this and the World of Outlaws have never started 3-wide. The atmosphere and energy before that green flag is going to be through the roof.”

“We have been overwhelmed with the number of calls for tickets and camping,” he added.


In addition to the Super Late Models, officials have partnered with Marshalltown Speedway to provide a three-day IMCA Modified romp tallying over $30,000 in prize money, with a $1,000-to-win feature at Marshalltown on Thursday, April 30, a pair of Twin Hawk $1,000-to-win features at Boone on Friday and the $3,000-to-win “Hawkeye 30” on Saturday May 2nd. IMCA Sport Mods and IMCA Stock Cars will feature at Marshalltown Thursday, with Sport Mods running Friday at Boone and Stock Cars rounding out the lineup on Saturday.

Tickets and reserved camping spaces for the inaugural Hawkeye 100 are on sale now in the links below and raceboone.com, or by calling 844-DIRT-TIX.