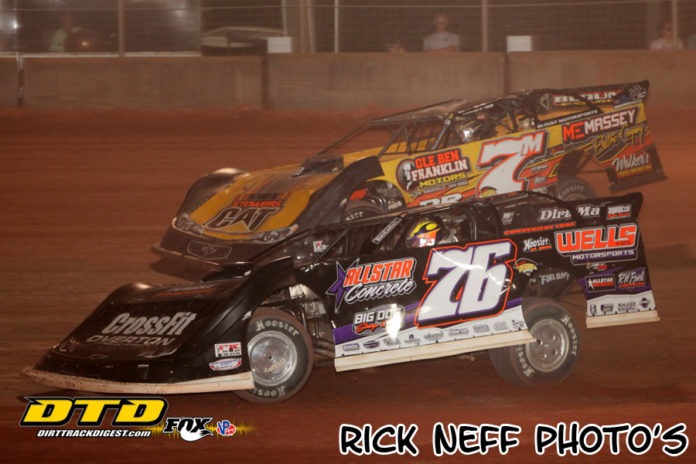 NORMAN PARK, GA – Brandon Overton of Evans, Ga. made an outside move of Donald McIntosh with 16 laps to go to take the lead and go on to win the $10,053 Schaeffer’s Oil Southern Nationals Series by Sunoco Race Fuels event at Needmore Speedway on Friday Night.

Donald McIntosh would take the lead at the start of the fifty-three-lap event, with Ross Bailes, Brandon Overton, Mark Whitener, and Chris Madden in pursuit. McIntosh would lead the opening seven circuits of the event until Bailes would drive past him for the race lead on lap eight. McIntosh would maintain second, with Overton still third, while Madden and Whitener would begin to battle for the fourth position until the pair made contact entering turn three on lap fourteen, with Whitener stopping on the track while Madden did a complete spin around and never stopped. Once action resumed, Bailes would continue to lead, with McIntosh and Overton giving chase until misfortune would strike Bailes as he would slow on the backchute on lap twenty-one with a flat tire. The restart would see another wild scramble as Madden and Wil Herrington would make contact on the backstretch, but both would be able to continue. Another restart would be called back for a multi-car tangle in turn two that would see several cars involved, with only two drivers not able to continue.

Once racing resumed, McIntosh would inherit the lead after Bailes had the flat tire earlier, with Overton running second. McIntosh would hold a comfortable lead until he caught slower traffic on lap thirty-three and Overton would close right up on McIntosh and take the lead with a gutsy outside pass of McIntosh to take the race lead on lap thirty-seven. Overton would lead the remainder of the way and score the victory, with McIntosh limping his mount home in second after suffering a flat right-rear tire on the final lap. Hometown racer John Baker would score his career finish with the tour by claiming third. Michael Page and Pearson Lee Williams would complete the top five. The remainder of the top ten finishers would be Bailes, Madden, Jake Knowles, Russell Brown, Jr., and Herrington.

The next event for the Schaeffer’s Oil Southern Nationals Series will be Saturday July 18, 2020 at Screven Motor Speedway in Sylvania, Ga. paying $10,053-to-win.